The only known Golden Eagle cam in North America is near Sisters, capturing a mom and dad sitting on their eggs

If you want to peek in on the life and times of a pair of beautiful, wild, Golden Eagles nesting locally, all you have to do is go to goldeneaglecam.org. There, Petra, the female, and Rocky, the male, are back again this year.

I don't think anyone knew about the eagles until Janet Zuelke and Forrest Babcock noticed the cliff nest from their place almost directly across from it on Whychus Creek—way back when it was Squaw Creek. I wouldn't have known about it either if Janet hadn't called me in the 2003 nesting season.

Babcock was a whiz-bang optical engineer back in those days, and telescopes were in his bailiwick. He and Zuelke rigged up a telescope on the end of a TV camera that allowed them to bring the eagle into their television set. Oh boy, was that something for Zuelke! She loved sitting in her living room and watching the daily doings of that eagle family. 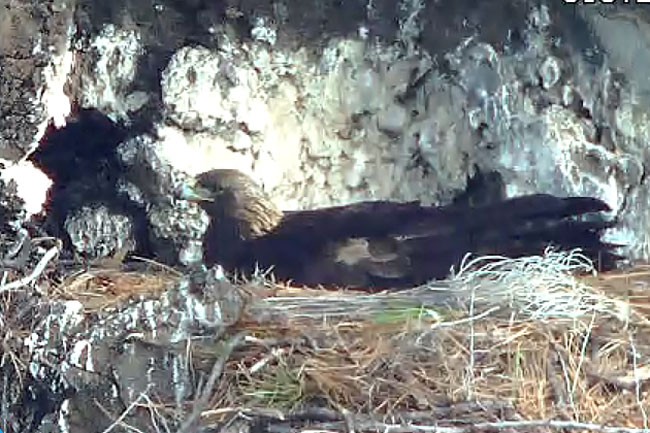 Then, without warning, on an unusually windy day, disaster struck. "Forrest!" she shouted, "The baby has fallen out of the nest!"

"Call Jim Anderson," he replied, "Maybe he can get it back."

I had never heard anyone so upset. She was almost shouting at me as she explained the dilemma. "I'm watching a baby eagle clinging to sticks on the side of the nest, and I'm afraid it's going to fall!"

I was about to suggest she get out of that area and leave the eagle alone when she shut that thought off with, "We have a telescope set up and it's sending the image into our television!"

Well, that was different. Unfortunately, Sue and I were far out in the field looking at other eagle nests and couldn't immediately respond. Zuelke watched as the adult eagle tried again and again to coax the baby with food to get it back into the safety of the nest, but all to no avail. The poor nestling had no strength to climb up the vertical side, and the wind that blew it out was still very strong.

This wasn't just a dilemma for the young eagle, but it was also for me. It was a natural situation going on, not anything man-caused, and my conscience and my legal permission to interrupt a natural event was such that I couldn't intervene. Trying to explain that to that dear woman would not only be impossible but from her standpoint, unconscionable.

Unfortunately for the Golden Eagle population, two young in the nest spells trouble. tweet this

She kept us informed with frantic phone calls.

The situation was solved within a few hours when another big gust of wind hitting the nest. The adult eagle, with her mouth full of rabbit, was lifted off the nest and the poor little guy below her, clinging to a few sticks, lost its grip and fell to its death on the rocks far below.

The eagles didn't return until 2010. But in spite of the outcome of that past nesting attempt, both Zuekle and Babcock began gearing up for the season when they noticed a new pair at the site. Babcock's snazzy optical equipment brought the nest into their living room better and better and each year they recorded the eagle's outcome. Eventually, with help from technical experts, friends and local organizations, they ended up with the only optical equipment in the U.S. streaming an active Golden Eagle nest online.

People who were watching the eagle site contributed money and material and Zuelke, in her usual educator-and-wildlife ways, made the eagle site available for schools.

And that's the way it was when Leslie Lawrence purchased Zuelke and Babcock's place in 2014. But the year before that land change, Babcock took it upon himself to build a stronger and firmer base to put the telescope on. With the aid of his sturdy body and wheelbarrow, he hauled load after load of concrete—all alone—to the location of his eagle-observing equipment and created the rock-solid telescope support pillar that's there today.

When Lawrence moved in, this could have been the end of spying on that pair of eagles. But thanks to her enthusiastic cooperation, initial technical support provided by Tony Kay, and the genius of Jim Hammond, who had skills similar to Babcock's, the whole system was upgraded with newer and better optical equipment (all donated or lent to the project), and now sends out images that blow us away.

The nest is still there, thanks in part to two impactful events and lots of wonderful people. The Deschutes Land Trust has taken over ownership of the land the nest rests upon, and East Cascades Audubon Society is paying the cost of the internet access and online charges that make this unique experience possible today. Plus, you, dear readers, have chipped in via the website donate link to help ECAS along with the financial needs. Can't beat that with a stick!

In 2019, one of the young eagles fell out of the nest, an event that happens often with two young. Unfortunately for the Golden Eagle population, two young in the nest spells trouble. They compete for food and location, which usually ends with the death of the smaller nestling (usually a male).

That year, with a lot of the world watching, the smaller of the two eaglets accidentally got bumped out of the nest and fell to the rocks below. This turned out to be a social—as well as a biological dilemma—of the first order. No one wanted to see that bird die! Which is what would have happened, but Hammond and Greg Moring hiked down to the fallen bird, wrapped it in towels, and handed it off to Gary Landers, who operated a raptor rehabilitation facility near Sisters at the time.

Landers kept it under observation for 10 days, made sure it was healthy, then a team of climbers re-nested the chick alongside its sibling, who seemed glad to have him back. Both chicks continued to grow without further incident and fledged later in June.

The Land Trust has closed this area for protection's sake until the end of the nesting season. With that, if you want to follow Petra's "pregnancy" (she has laid two eggs and she and Rocky take turns incubating), head to the Golden Eagle cam site. As far as we know, this is the only Golden Eagle cam in the western hemisphere (there are two more in Europe). Then, if you would like to support this privilege, click the "donate" button to help reimburse their expenses.