January 02, 2019
comment
A bunch of dudes jamming out in the wilderness just feels like Bend, doesn’t it? And that’s exactly what local band Night Channels did with its debut single’s music video.

In the video for “03,” you’ll find Night Channels deep in the brush, on the roof and just generally looking cool while shredding on guitar in front of towering trees. The video, shot by Bend’s 12th Street Media, takes place at Shevlin Park. And the roof? That belonged to the Domino Room. 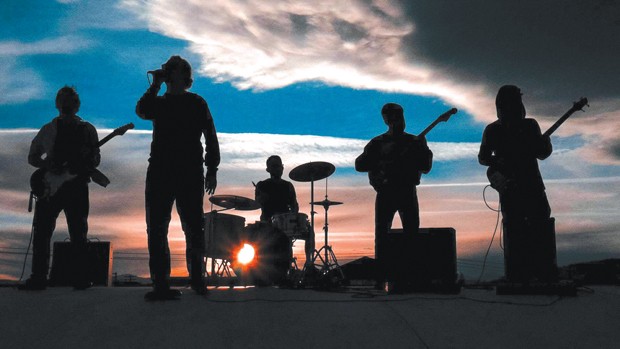 “Just a day,” says lead vocalist Joey Vaughn about the shooting process. “We did an afternoon shoot at Shevlin, and then we broke for lunch. Then we went right back to Domino Room because the sun was setting.” That’s when they captured the video’s final shot.

Night Channels is built as a five-piece. You have Alex Montoya on drums (who fondly remembers hauling up his drum kit to the roof for the video shoot), Josh Ryan on guitar one, Colton Hemenway on guitar two and Mason Coats on bass. When I asked how they all met up, both Montoya and Vaughn beamed. “It’s kind of the same for me, Alex and Josh,” says Vaughn. “We all were like “Hey, I want to do some music stuff.” So we [each] went on Craigslist, found an ad, and that’s it. We were pretty fortunate that we found friendships out of a random Craigslist meet.”

The “03” video starts off pretty mellow, but around the two-and a half minute mark it absolutely explodes. It was an intentional move, as the guys wanted to leave the listener with a powerful outtro. They definitely succeeded in leaving a memorable impression, which is ultimately the goal for a young band making their way through the local scene.

Following the release of “03,” the guys are preparing to drop a lot more music. They’re currently mastering two tracks, one of which might come with another music video that Night Channels is very excited for. The video will have more of a narrative, or as Montoya deeply emphasized, “more emotion.” Of course, following the singles will eventually be the debut album, and possibly a tour to go along with it.

To get more acquainted with what Night Channels is bringing to the table, you can catch them opening at the Domino Room Jan. 10. That might be their last show for a while as they begin prepping the album, so you don’t want to be the one catching up while your friend is playing all the sweet local jams.