A snapshot of Bend and Redmond's top water users in 2021

The Source Weekly requested public records about the largest residential and commercial users in Bend and Redmond. While this picture is still incomplete, it reveals important info about municipal water usage. We aim to shed light on disparate realities in Central Oregon: while some farmers are struggling to make it through the season amid severe drought, some residents are using over 1 million gallons of water a year for lawns.

Across the acres of land surrounding Redmond and Tumalo, residential wells are drying up at alarming rates. Travel north to the Madras region, and farmers are letting their land go fallow amid a shrinking water supply.

But zoom in within city limits in Central Oregon, and residents aren't facing the same constraints. With the worst megadrought the west has seen in at least 1,200 years, the City of Bend and Redmond are urging residents to conserve water, but doing so is voluntary, and not everyone is reducing their use.

So, the Source Weekly set out to track where our water is going. We know that about 95% of water in the Upper Deschutes River Basin goes to irrigation, and — with inconsistent metering and canal water seeping into the ground — it's nearly impossible to determine exactly who's using all that water. Instead, we looked toward the remaining 5%, or municipal use, since it's something we can track.

Why does it matter?

In the U.S., households use 29 billion gallons of water daily. Most of that water often goes to lawns and other outdoor uses, yet 50% of that water is wasted, in part, due to overwatering.

This comes as signs of climate change and intensifying drought are striking in every corner of the West. The Colorado River is reaching record lows, threatening the water source for 40 million people. The Great Salt Lake is drying up, leaving ecosystems endangered and creating a bowl of toxic dust around the neighboring city.

Across the West, we're seeing an increased sense of urgency to conserve water. In Central Oregon, for instance, community members are rallying against luxury resorts like Thornburgh, which was originally permitted to use nearly 700 million gallons of water a year. (The developer, Kameron DeLashmutt, said the resort is working to make "substantial reductions" to its use, though it's unclear what these reductions will be.) 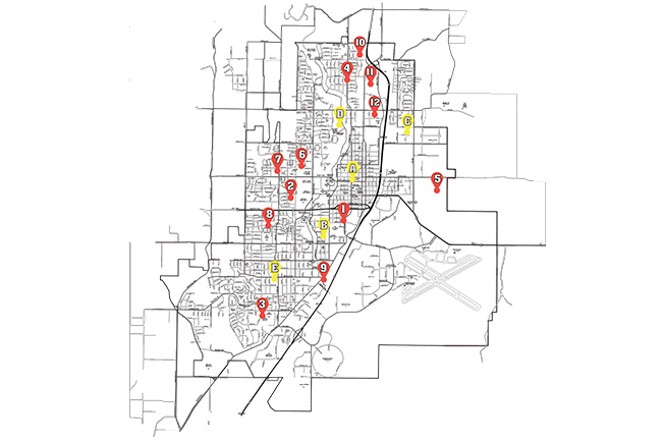 Meanwhile, farmers continue to suffer and worry they won't make it through the season. A lot of this comes down to Oregon's water law system, which experts across the region have deemed "archaic." But making institutional change is a slow process. Limiting municipal water use won't do much for the dire situations farmers face, but it could help build "a culture of conservation" and eventually lead to more structural change, according to Tod Heisler, a longtime Deschutes River advocate.

"We want to start with the people who will accept some of this change and ownership," Heisler said, "and then start working outward to everybody else." 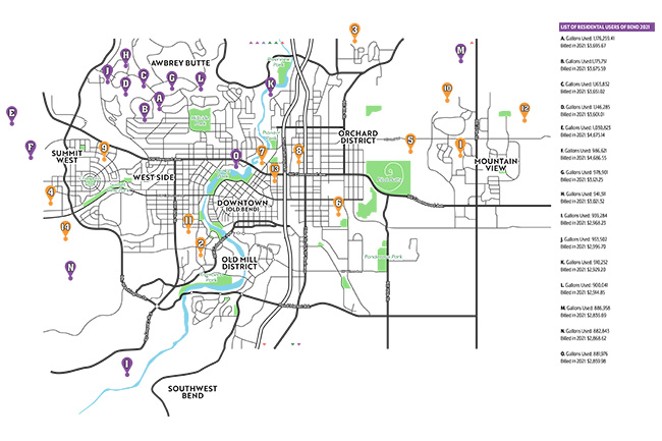 ***It's important to note that this is an incomplete picture, as Avion serves a lot of the larger properties on the east side of town, which could have made this list.

Bend's top residential customers use more water than Redmond's. The City of Bend had five customers using over one million gallons of water in 2021. Redmond only had one. Interestingly, Bend's top users do pay about twice as much as Redmond's top users. According to Michael Buettner, Bend's utility director, this is likely because Bend's water system is more complex and costlier to maintain than Redmond's.

Most of Bend and Redmond's largest commercial users are schools and hospitals — but breweries, labs and one car wash also made the list. Schools use water to irrigate lawns and athletic fields, and their usage largely correlates with the size of their green space. For St. Charles, Bend's largest user at 43 million gallons a year, water is critical for patient care, according to the hospital's spokesperson. Next up is Deschutes Brewery, which used 34 million gallons, since water is the main ingredient in beer. 10 Barrel and Humm Kombucha also rank in the top commercial users. Manufacturing hubs like Lonza and SiCamore Semi follow. And don't forget Redmond's Surf Thru Express Car Wash and Walmart Supercenter, which used 7.5 and 7.3 million gallons of water, respectively.

***The Bend Parks & Recreation District didn't make this list because it has multiple water providers, and the city only serves water to some of the smaller parks in town. According to Buettner, if looked at in aggregate, the parks would likely be in the city's top five water users.

River's Edge Golf Course used nearly twice as much water as St. Charles in Bend. The golf course — located off Mt. Washington Drive — used nearly 82 million gallons, compared to St. Charles' 43 million. Even at 82 million, River's Edge only used about half of the water it's allowed to divert out of the Deschutes River, according to the Central Oregon Irrigation District, which serves the golf course its water. The region's golf courses and resorts largely use groundwater through their own water rights, making it difficult to determine how much water they used. River's Edge is one of the only golf courses required to report its consumption, since it diverts water from the river. 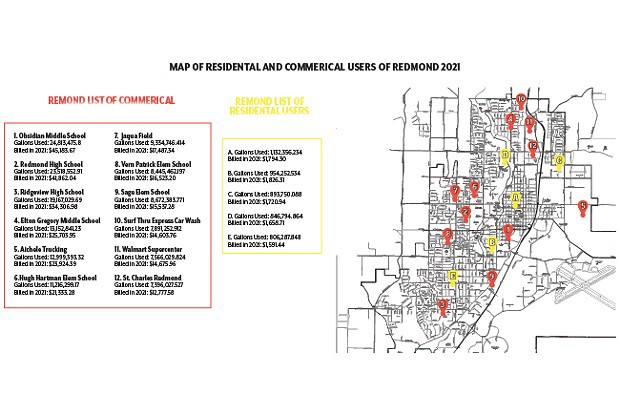 How to reduce your water use:

• If you're a Bend Water customer, sign up for WaterSmart, where you can track your water use and sign up for leak alerts.

• Buy Energy-Star certified appliances, which can save you water and money.

• Use xeriscaping or a water-wise landscaping plan.

• Water outdoor areas in the early morning or evenings to beat daytime evaporation.

• Update your sprinkler system, making sure you're watering the lawn, not the sidewalk and driveway. Bend Water customers can request a free sprinkler inspection through September.

“I know there's a general interest in the public to have a transparent understanding of what's happening in the water world, and we support that here.” —-Michael Buettner, Bend utility director tweet this

The Source Weekly received records from the city-run utilities, Bend and Redmond Water, but we soon hit a snag when Avion denied our requests, arguing that since it is a private company, it isn't subject to public record law. The Source Weekly appealed this decision to Deschutes District Attorney John Hummel, since water itself is public in Oregon, and Hummel decided that Avion is the "functional equivalent" of a public body, and thus subject to public records law.

He added in his May 26 decision, "We're in the West, we're in a drought, and this request relates to water usage."

Avion had two choices: it could either provide the records or take the Source Weekly to court. The company chose the latter, and — with litigation ongoing — we're unlikely to see those records for months. The Source isn't alone in this kind of lawsuit: after the Oregonian tried to get water use data about the Google data center in The Dalles, the city decided to sue to keep the records private.

In Central Oregon, we were left with an incomplete picture of residential water usage, since Avion serves roughly 15% of Bend, including the fast-growing developments on the north and east sides of town. Even though the company operates through a franchise agreement with the city of Bend, city officials are in the dark about how much water Avion customers are using.

And with the city growing largely in the parts Avion serves, public records from the city offer us a limited view of water consumption. Bend Water officials told the Source that, as the city's population doubled over the last two decades, water consumption stayed largely the same thanks to metering and greater conservation measures. And, on Aug. 3, the public utility told the city council that — as of July 31 — water consumption was down this year, compared to previous years. But, none of this factors in data about the large swaths of town that Avion serves.

"I know there's a general interest in the public to have a transparent understanding of what's happening in the water world, and we support that here," Buettner, the Bend utility director, told the Source. "We obviously can't make other people share their data. But we're curious (about Avion's data) as well."

Without information about nearly a fifth of Bend's population, we deemed it unfair to publish the names and exact addresses of top users, as we'd originally planned. (We were also unable to determine to what extent leaks factored into water use.) Our approach to this story was similar to what other newspapers, including Willamette Week in Portland, have done when they gain public records and then publish the names and addresses of the top water users in their areas. If we obtain records from Avion, we plan to publish names and addresses of the top users.

Instead, we offer readers a map of where some of the largest water users live, how much water they used in 2021 and how much they spent. We put this side-by-side with commercial data, in order to start to fill in that water use picture. We also gained some information about golf courses like River's Edge from irrigation districts. This story is by no means comprehensive and doesn't touch on specific developments, resorts and cities like Sisters and Prineville, but it's a start at offering a snapshot of where our water is going.

Related Water Woes for Farmers: Drought and river conservation measures have left Central Oregon farmers with less water — though some are harder hit than others.

Water Woes for Farmers
Drought and river conservation measures have left Central Oregon farmers with less water — though some are harder hit than others.
By Hanna Merzbach
Local News

Related The Well's Run Dry: With the ongoing drought, growing population and piping of canals, Central Oregonians are increasingly seeing their wells go dry. Many may be out of luck.

The Well's Run Dry
With the ongoing drought, growing population and piping of canals, Central Oregonians are increasingly seeing their wells go dry. Many may be out of luck.
By Hanna Merzbach
Local News