One year ago, the Source Weekly published an article titled "The Virus and Bend's Sewage" that explored whether Bend's wastewater posed a risk as it related to COVID-19. As that piece outlined, the water that drains from Bend's toilets and sinks and showers goes through a three-step process to be cleaned... and then, it's dumped into ponds to let it evaporate or seep into the ground. When we published that article, water shortages were, like they are every summer, on the minds of farmers and others. Farmers along the North Unit Irrigation District, the most "junior" of water-rights holders in the Deschutes River system, get shorted any time there's a drought—which in these times, is basically every year.

"Our facility is near North Unit," City of Bend Water Reclamation Facility program manager Tim Truax told the Source last year. "We could get a credit to the City for canal water flows. Right now, the City is in good shape, but if there's an effort to increase in-stream flows and reduce the amount of water that's diverted from the Deschutes (River), there certainly can be conversations." 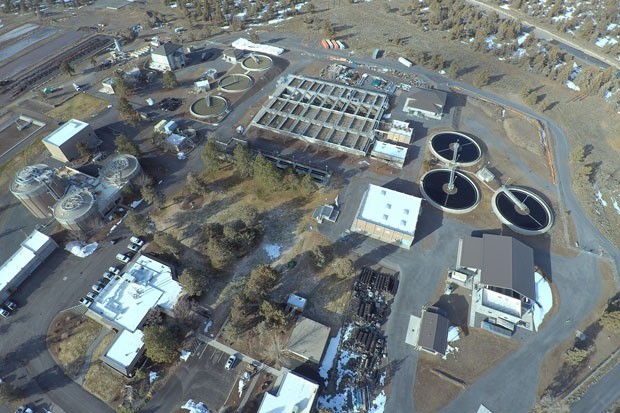 If you're among those who have ever contemplated how inane it is that we continue to flush our toilets with fresh, clean, precious water, all while state and local leaders cry "drought!," then you might glean what we're going to say next. We as a society can and should begin to re-examine the ways we are using water, and to re-tool our systems to conserve precious resources (converting our toilets to use home greywater, for example, which is legal under Oregon law)—but in the meantime, our communities as a whole can already be doing better to work together to use the resources we have.

This week, another local media outlet reported that the City of Bend has begun talks with the North Unit about the possibility of sharing Bend's wastewater with those farmers. The City has sold water in the past, namely to nearby Pronghorn Resort. In places in the eastern United States, some cities sell their treated wastewater to other cities for their drinking water, Truax told the Source last year. All this is to say that recycling water is a viable method of sharing resources, and it's a no-brainer that it should happen now.

While the conversations are just beginning, and the amount of treated wastewater the North Unit would get would only be a fraction of what the farmers there need, this is an example of what we should be doing, together, to ease this ongoing crisis. Cities and other quasi-governmental agencies (such as irrigation districts) should be digging deep right now to find ways to share resources. One in three people in the world already lacks access to safe drinking water, according to a 2019 report from the World Health Organization—and yet here we are, in a drought, surrounded by fires exacerbated by dry conditions, letting clean water evaporate east of Bend.

It's no longer a doomsday proposition to say that water is going to be the reason for many conflicts in the future. Our water wars are already here. Let's work together to access the low-hanging fruit.