Drought and river conservation measures have left Central Oregon farmers with less water — though some are harder hit than others.

On a sunny June day, Chris Casad sat on his tractor transplanting onions. Central Oregon had been seeing a wet season, but when he dug down a couple of inches, parts of his 360 acres of land in Madras were still bone dry: the weeks of rain had barely made a dent.

"It's really hard to see the farm dry up so much," said Casad, a first-generation farmer who owns Casad Family Farms with his wife.

The Casads' irrigation district, the North Unit, is home to much of the commercial agriculture in Central Oregon, yet it's getting only about a quarter of its normal water allotment. Farmers, like Casad, are left to make sacrifices: for him, that means drying up a couple acres in order to have enough water to grow potatoes. For others, this means closing shop altogether.

This is the third consecutive year that the governor declared a drought in Deschutes, Jefferson and Crook counties — and the first time this has happened three years in a row. While farmers across the region are feeling the effects, Madras and Culver farmers in Jefferson County are particularly hard-hit due to century-old irrigation systems. Meanwhile, local, state and federal officials have been slow to come up with solutions, and — according to many farmers — river conservation measures aren't helping.

"A lot of our neighbors are in tough situations," Casad said. "We're probably going to see a lot of farms go under this next year."

"First in time, first in right"

This all goes back to water rights. The region's eight irrigation districts — Arnold, Central Oregon, Lone Pine, North Unit, Ochoco, Swalley, Three Sisters and Tumalo — were all established around the turn of the 20th Century, but they see vastly different water allocations. This is because it's a "first in time, first in right" system. Essentially, the districts created first get more water. The region's water, which flows down from the Cascades, was also vastly over appropriated, so — even in a good year — there may not be enough water for everybody who needs it.

"A lot of our neighbors are in tough situations. We're probably going to see a lot of farms go under this next year."—Chris Casad tweet this

This year, all the water districts are seeing shortages. The Tumalo Irrigation District, for instance, is employing a week-on/week-off water system. But the disparity plays out most starkly between the Central Oregon and North Unit districts, the region's largest districts.

COID, which encompasses the area around Bend and Redmond, has the senior-most rights, established in 1900. "Use it or lose it" is the dominant thinking with water rights. So, since many of the district's patrons aren't commercial farmers, many use their water for hobby farms or to water their lawns, in order to keep their rights. As of July 8, patrons were receiving nearly 5 acre-feet of water per acre.

Meanwhile, for NUID, which was created in 1913, most of its farmers are getting .55 acre-feet of water, largely from Wickiup Reservoir. This is up from earlier this year, when the district had planned to allocate just .45 acre-feet, but it's still well below the normal allotment of 2 acre-feet.

According to Casad, "A lot of this is old western water law, but now it's not practical to the situation at hand."

Farmers in the Central Oregon district are also expecting water curtailments — to the tune of 65% of normal in mid to late July — but nothing like what North Unit is seeing. Megan Kellner-Rode, the co-owner of Boundless Farmstead, a vegetable farm in COID, said her farm is one of the more fortunate ones.

"Where we're affected most is watching our friends and peers struggling in junior rights districts," she said.

While Kellner-Rode is moving full steam ahead this season, Casad has planned serious cutbacks. This means producing 50,000 pounds of organic potatoes instead of 150,000 and largely growing hay to feed the farm's animals, rather than selling it to Oregon customers. 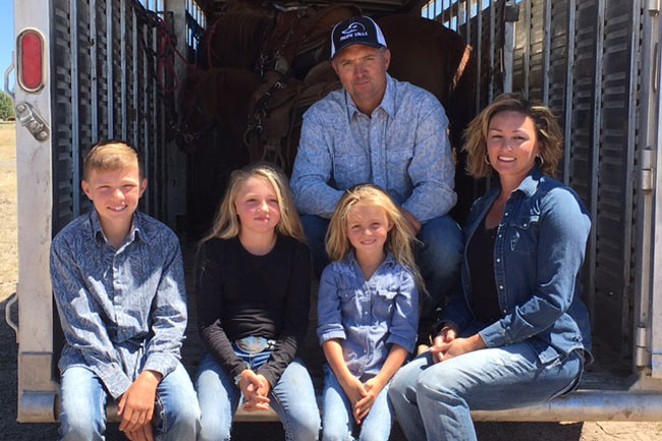 The farm has moved away from the farmers market economy and started to diversify, pivoting toward high-value products, like mailing boxes of grass-fed beef. But without enough water, Casad can't fulfill all the markets he'd like to. He's trying to be optimistic but said it's frustrating to put so much money into infrastructure over the years and not be able to capitalize on it. Casad's wife, Cate Havstad-Casad, has a couple of businesses, including a hat company, which help sustain the family's farm.

"The off-farm income business is keeping us on the farm," Casad said.

The ongoing drought is the main reason for the water shortages, according to Jeremy Giffin, Oregon Water Resource Department's watermaster for the region. But new conservation measures are making the situation more dire.

For over a decade, environmentalists and farm advocates have been entangled in a battle over one species: the Oregon spotted frog. Declared threatened under the Endangered Species Act in 2014, the spotted frog has critical habitats along the Deschutes River. In 2020, years of debate culminated in the passage of a habitat conservation plan, which aims to restore the Deschutes closer to its natural flow.

This plan also requires the North Unit to release water for the frog in the winter months from Wickiup — which, as of July 7, was only 28% full. According to Giffin, this is the first year that four out of five of the local reservoirs are likely to go dry, largely due to climatic conditions.

"We're doing our best in the basin to keep up with conservation measures," Giffin said. "It's just going to be extremely tough to make up for that amount of water that's going to be missing out of the upper basin reservoirs."

Some farmers blame their water issues entirely on the spotted frog. Matt Cyrus, the president of Deschutes County Farm Bureau, thinks irrigation districts would be doing much better without the conservation measures and attributes the ongoing water shortage to politics, rather than climatic conditions, though Giffin affirmed that the overlying reason for the shortages is the drought.

Because of the conservation plan, "There's a lot of ground that's just being dried up [in North Unit]," according to Cyrus, a sixth-generation farmer.

But Tod Heisler, a longtime river advocate who worked to develop the conservation plan, said it's "irresponsible" for farmers to blame their water issues entirely on the spotted frog. Water was over appropriated in the first place, he said, and has been inefficiently managed for 120 years.

"We work hard to get these tiny bits [of water back in the river]," he said. "The problem is that [the conservation plan] was a change."

COID is currently in the midst of an elaborate canal piping project, helped by $30 million in federal funds. Up to 50% of water from canals in the region has historically seeped into the ground before it reaches the farms, according to experts, so piping the canals is aimed at getting farmers more water. This solution does come with trade-offs though: piping canals may mean less groundwater for residents who rely on wells. This large-scale piping project will also largely benefit water users in the irrigation district with the most water.

"It's still a step in the right direction," Heisler said. "But [irrigation districts] really need to work much more effectively out at the farms."

These could mean more efficient sprinkler units and financial incentives to use less water. Many also support "water banks," which could transfer water from people who have extra to those in need. A pilot program is currently underway, allowing Central Oregon Irrigation District patrons to sell their water to the North Unit, though participation numbers are low: Due to technicalities in the water rights system, patrons will only sell 90 acres of water, while the target was 1,200 acres.

The North Unit has also eyed the water in Lake Billy Chinook as a possible solution to its crisis, though critics say a project of that magnitude would be pricey and time-consuming.

"If we do find an alternative water source, [farmers] are going to be done anyway," said JoHanna Symons, who co-owns a beef company in Madras. Due to the water shortage, Symons is only able to farm about 200 acres out of 1,100, she said.

That's one reason why, in 2016, she and her husband started the organization, Perfect Balance USA, in order to give farmers like them a seat at the table and work toward "a common sense" solution, where farmers and frogs can both thrive.

A large part of the organization's focus is on educating the public through tours of the farm and showing people where their food comes from. Though these efforts give her hope, Symons is tired of seeing her neighbors' farms go under.

"A lot of the farms around here have been handed down from generations," she said. "We've worked our whole lives to pay for the farmland and everything that we've gotten. The thought of losing absolutely everything — it's just devastating."