Raise your hand if you've used one of Central Oregon's trails. Now keep reading if you plan to use them again.

The High Desert is home to a variety of trails for all types of things—biking, walking, running, snowshoeing and more. As the community continues to grow, it's important that these trails continue to evolve as well. We checked in with the Central Oregon Trail Alliance and Bend Park and Recreation District to see how all that earth-moving is going. 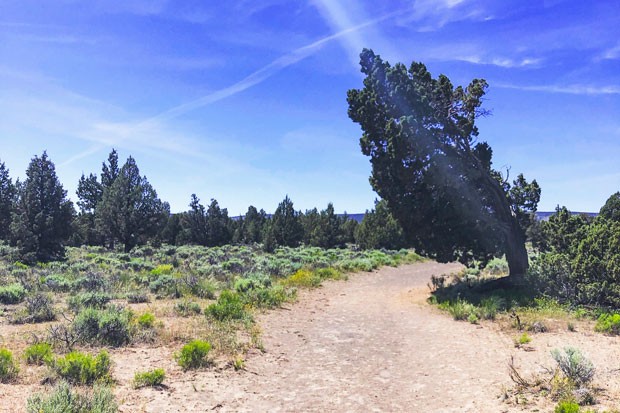 COTA is a nonprofit dedicated to developing and protecting mountain biking in Central Oregon. Its crews often work closely with the U.S. Forest Service, Bureau of Land Management, Bend Park and Recreation and other organizations on trail projects in the area.

Following a busy year in 2019, during which COTA completed the new COD trail, added a COTA chapter in Sunriver, completed the first phase of the Sunriver trail system, finished construction on 12 miles of multi-use trails in the Madras East Hills and much more, the organization already has a well-planned out 2020.

"We've got a lot on our plate for 2020, with six chapters managing new trail builds AND a ton of trail maintenance," board member Kelly Burke told the Source. "While trail maintenance isn't as exciting as building new, it's just as important. We all know what happens to roads and homes that aren't properly cared for."

Items on the docket in 2020 include finishing planning for converting Crook County's Bandit Springs winter trail system into a summer trail system, beginning development of trail improvements in the system west of Bend, continuing to work with BPRD to create a robust trail environment at Big Sky Bike Park and more. You wouldn't be wrong to say it's a really good time to be a cyclist.

For Bend Park and Recreation District, two themes abound when it comes to its trail network: Connectivity and accessibility. Changes coming in the near future include resurfacing the Haul Road Trail and improving 14 crossings along it, as well as resurfacing portions of the Central Oregon Historic Canal Trail, said Henry Stroud, trail planner at BPRD.

In terms of connectivity, BPRD is working with the City of Bend to hone its "low stress network"—a City project aimed at mapping and improving connections to create the lowest-stress routes for cyclists and other active commuters.

"Trails are great. They're easy to ride on. But it's not always feasible to use trails to get us to where we want to go. And that's why people drive cars," says Stroud. "Right now, I'm working really hard with the City to figure out how our trail network can work best with their low stress network."

Accomplishing that involves an emphasis on safety at road crossings. This includes trail signage and pavement markings, but also the need to make the road crossings enticing enough for people to use—rather than forging one's own path to the trail. BPRD currently has four crossings in the design phase. The City has just completed one on 15th Street and will complete one for pedestrians crossing Third Street.

Connecting the trails is one issue; making sure they are accessible to all is another. Whether it's making things more wheelchair accessible or having access points near more neighborhoods, BPRD wants Central Oregon to be a place where everyone can enjoy local trails.

"We always start from the standpoint that you want it to be as accessible as possible," says Stroud. "We want to design them to support people of all levels."