Pigeons Playing Ping Pong find new territory on its latest album, but are still jamming all the same

"I'm coming in hot," said Alex Petropulos, drummer for Pigeons Playing Ping Pong, as we hopped on the phone for our interview. It was a sh*tty Valentine's Day morning in San Francisco. The band woke up and found all of their ski gear stolen (a Bendite's worst nightmare). Petropulos actually stumbled upon a group of people with the gear and tried getting it back right before our call—but we'll just say his efforts did not go well. 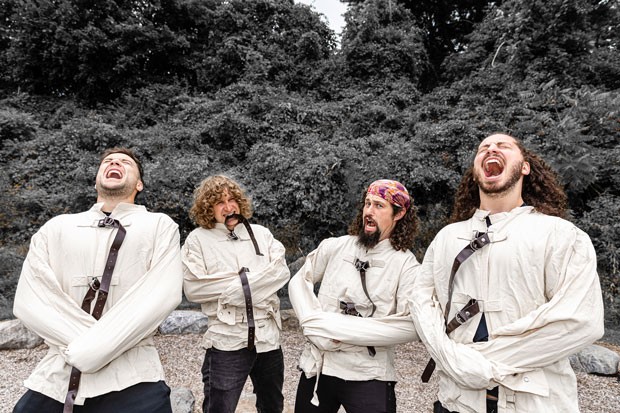 "I'm just going to keep my eye on the prize," laughed Petropulos.

While he waited to see if the gear could be tracked down, we spoke about the band's newest album, "Presto," released in January.

"We have a handful of studio records now and we were proud of the process with making this one," says Petropulos. "It was the most comfortable process I feel we've had so far."

Having spent five years with the band, "Presto" marks the second studio album that Petropulos has worked on with PPPP, apart from the band's live recordings. "We were really organized and ready to take that on. The sound turned out great and it's a cool collection of songs," he said.

"Presto" is an album made mostly of fresh songs and new direction for the Baltimore-based band—but there's definitely still something there for die-hard fans, too. For a band based so much on energy and jamming with the crowd, a studio album poses different obstacles.

"We'll really try to portray that live feel. Such a big part of our show is riding that energy from the crowd and building those peaks. It's tough taking a song that's normally 12 minutes and making it four minutes for an album," Petropulos tells the Source. "Not that you need to do that, but we try to do a healthy mix. We'll edit some songs to allow them to be easily digestible to people."

Even a studio album can still bring those improv-type jams that have made PPPP so famous. On "Presto," listeners will find good examples of this; "Avalanche" and "Snake Eyes" are two songs where the band really stuck to its roots. Petropulos doubts they'll ever go this far, but lead singer Greg Ormont has joked about placing a projector in the studio with them that shows a really rowdy crowd to hype the band up—innovation at its finest.

PPPP keeps an archive of all of the band's past set lists, so they know to switch it up next time they're in the same city. More often than not, the group also makes on-the-fly changes to the performance anyway.

"We have a lot of funny, intentional signals too that I can't give away—but if you ever see us on stage out of nowhere crouching down, sticking a leg out, a tongue or something like that, it might mean something! We don't always just look ridiculous."

One of my favorite songs off "Presto" is something of a love song, called "Fortress." It's the tale of boy Roy and girl Pearl's journey to finding each other's love—and since it was Valentine's Day during our interview, I had to ask Petropulos where the duo was at now.

"You know, I can only hope they are both happy," says Petropulos, laughing. "We're just going to keep playing their song. Yeah, maybe that's a good one to bust out on Valentine's Day. But I wish them the best. We need to catch up with them—it's been a minute."

When Petropulos first started with the band he says the group was playing north of 200 shows a year. Now with momentum and a built fanbase, PPPP has scaled back to around 120 shows (still insane). Even when they aren't touring, the guys are going out to see shows, working on other side projects or rehearsing. But what does one do when you spend that much time on a tour bus?

"One really funny, sort of ritualistic thing after shows when we're hangin'—we get on the bus and we have this TV screen back in the lounge and we'll put on old kung fu movies, but we'll rock out to music over it. It sounds really stupid [laughs] but like all the fight scenes line up perfectly with the music!"

That's just the life of a pigeon, I guess.