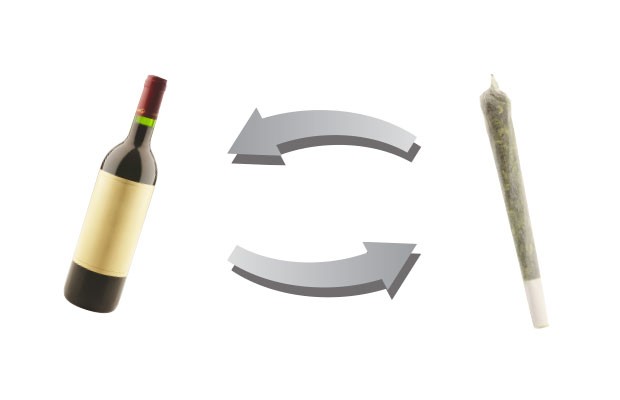 When living in Northern California, I spent many weekends doing the most Northern California thing possible, (aside from practicing nude goat yoga and crafting small-batch organic, free range chia kombucha), which was visiting wineries. Some of my favorite memories involve downing bottles of delicious, jammy Napa reds. Some of my least favorite memories were the epic hangovers that followed—a factor that led me to switch from the grape to the ganja.

Wine is still preferred over weed by many, but that may be changing. That might not be great news for the makers of vino, but it's a positive step for consumers, particularly women. Women make up nearly 60 percent of wine consumers, leading producers to market to them with greater intensity and success, and earning wine the somewhat creepy moniker "Mommy Juice" in some circles. (Do that? Stop.)

This isn't to say that every glass of wine is the devil's sippy cup and will result in wreck and ruin—unless it's a pinot spilled onto a white linen dress. But many of us know at least one person who has slowly progressed from a glass of wine after work once a week, to a couple nights a week, to a bottle or more most nights. Even in moderation, a glass of wine contains 100 to 300 calories, which can be an issue for those watching their weight, (#patriarchalbodyimagesarelies), alcohol is dehydrating and can result in drier skin and the histamines in red wine can result in skin flareups for those with rosacea and other inflammatory skin conditions.

Reaching for a wine glass instead of a joint can be attributed to a number of factors. Wine is still far more socially acceptable in many circles—especially the elusive unicorn for the cannabis market: soccer moms. Traditional smoking methods are (rightfully) frowned upon when used in close proximity to children, while less-invasive consumption methods, such as vape pens and low dose edibles, are not as well known. In states without a regulated cannabis program, legal, easy access to products is nearly non-existent, and education as to the comparative health and risk benefits between alcohol and cannabis can be difficult to come by, can or rely on outdated prohibitionist-era misinformation.

But as legalized cannabis programs expand across the U.S., trends are emerging, showing that cannabis use could be a disruptor in alcohol consumption, and wine in particular. New York-based research firm Rabonack released a report showing several reasons why.

A 2017 survey asked respondents, "If the federal government legalized marijuana would you... buy and use marijuana?" The rise was especially significant among women and older, wealthier consumers, the core demographic groups of the wine consumer.

States that introduce legal cannabis see a dramatic increase in cannabis consumption (aka the 'gee, really?' factor). The paper says as "...a disproportionate number of the people exposed to legal marijuana are wine drinkers," cannabis will replace a portion of the wine being consumed.

Not the '64 Rothschild level of wine enthusiast, but as an analyst from the report states, the wine consumers "tend to skew to the under -$10 segments... (will be) most likely to see some potential impact from legalization."

Thus, your "3 Buck Chuck" wine drinker may find themselves puffing on $3 hangover and calorie-free grams in its place.