Get your film, theater, climbing and music fix all in one weekend

January 10, 2019
comment
There's a lot going on this weekend—which is awesome! That is, until you can't make a decision on what to do...

If you need some help, here are some of the top notch options for what's happening:

Rock climbing is pretty crazy when you think about it, and after watching "The Dawn Wall" you'll know what I mean. The movie details the expedition made by Tommy Caldwell and Kevin Jorgeson as they try to climb The Dawn Wall, a 3,000 foot rock face in Yosemite. It took them six years to map out the best routes to take, and the film will take us right along on that journey. 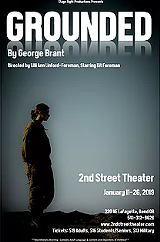 Head to the 2nd Street Theater and catch a great performance of "Grounded." The story is centered around a fighter pilot who has to end her career short due to an unexpected pregnancy. You might think her line of work would change, but it actually only gets a little more intense. Instead of flying a jet, she begins to pilot drones that help hunt down terrorists... If you ask me, that's all the action and drama you'll need for a Saturday night!

This mashup of rock and blues is going to be almost too rad! San Francisco-based Howlin' Rain are signed to Columbia Records under mastermind Rick Rubin and bring a very psychedelic feel to their sound—so things might get weird. Then newcomers Garcia Peoples are coming hot off of their debut album "Cosmic Cash." It's seriously a great night for some tunes!