Welcome to the Machine

This has to stop. "Alita: Battle Angel" is the second theatrical film I've seen this year that does something that a decade ago would have been unthinkable. "Alita" is about a cyborg with a human brain that teams up with a doctor of cybernetics and a boy she has a crush on to make their way from the ugly junkyard metropolis of Iron City to the majestic floating sky city of Zalem. 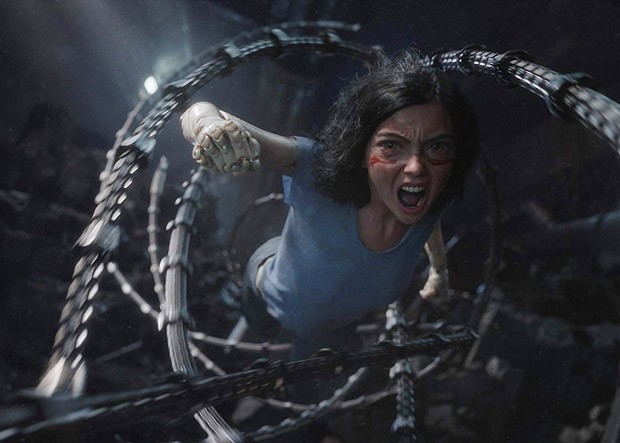 Aside from a few subplots and the introduction of the pod-racing-with-rollerblades sport of Motorball, the drive for these characters is to rise above their station and earn the right to live in Zalem. The unseen villain lives there with the entire (also unseen) ruling class, as does the real meat of the underdog story. The entire movie builds to Alita finally getting to Zalem, and as she's finally about to earn the right to go there...the movie ends.

It's one thing to set up a sequel during a climax, but it's another thing entirely not to finish the story you're telling in order to con audiences into shelling out for a follow-up that isn't even guaranteed. Sure, movies like "Kill Bill" or "The Matrix: Reloaded" or even "The Fellowship of the Ring" don't tell their complete stories, but they were sold to audiences as chapters in a larger story. Also, those examples had complete arcs within the framework of the larger narrative.

To have an entire movie building up toward a confrontation with the diabolical and faceless villain and the exploration of a legendary floating city isn't just a case of defying expectations, but of a cynical disdain of storytelling in general. Movies aren't TV shows we tune into each week for the next chapter. Even Marvel, which made its bones off of bi-monthly comic books, has managed to make all 20 films they've released tell complete stories.

Since I've been following the development of this movie for almost two decades, all of this is hugely disappointing. Making "Alita" was James Cameron's passion project before he fell down the rabbit hole of "Fern Gully." Wait, I meant "Avatar." Guillermo del Toro was attached for a while to direct until finally it fell into the hands of Robert Rodriguez, who arguably hasn't made a good movie since 2005.

What's even more disappointing is that "Alita" is a really entertaining movie filled with great action and a star-making lead performance by Rosa Salazar. The world-building is expansive and the special effects are astounding, but there's only two-thirds of a movie here. As a storyteller, the story you're telling has to end, not just stop. I can't tell if just stopping is lazy, cheap or a marketing decision, but whichever it is, I won't recommend a movie that might never be wrapped up. If I did that would make me