A local woman's healing journey turns into healing for others

Victims of domestic violence can react in many different ways. In the worst scenarios, some turn to drugs or alcohol to cope; others commit suicide as the burden becomes more than they can bear. Tammy Harty went the opposite route, taking a journey of healing that also helps others. 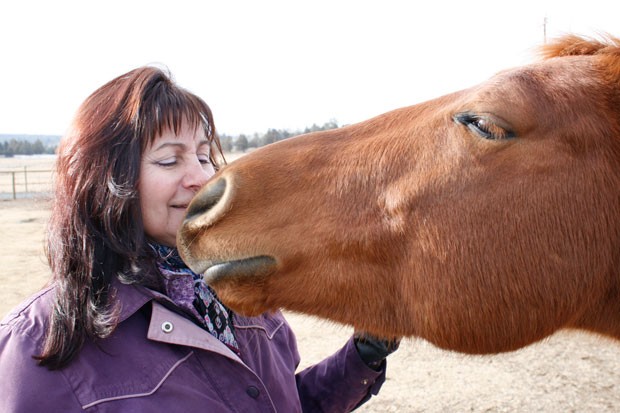 When Harty—who's a survivor of domestic violence herself—was 50, she said she was single, unemployed and pregnant—well, her horse Bunny was pregnant, at least. A career counselor suggested getting involved with kids and horses, so she applied to Oregon State University-Cascades' master of counseling program and got a part-time job and a student loan. She became the oldest person in the cohort, earning her master's in 2015 with a clinical focus on equine assisted psychotherapy. During her time at OSU, Harty said she worked with kids and veterans in an internship. Today, she owns a "wellness ranch" called Wellness Through Horses.

Equine-assisted therapy has emerged as a promising intervention for the treatment of trauma and stressor-related disorders, according to a 2017 paper published in Advances in Social Work. The therapy offers an option for clients whose traumatic experiences may render traditional talk therapies ineffective, the paper's authors wrote. The paper details how full-size horses are included in some psychotherapeutic settings because of their distinction as large prey animals. In their hypervigilant state, horses provide immediate, yet nonjudgmental feedback to clients about their behavior.

A ranch with a view

Driving up to Harty's 5-acre property in Tumalo, your eyes are filled with panoramic views of the Three Sisters and Broken Top. Turning down the gravel drive, Harty's horses are seen frolicking in their pastures. Pistol, Harty's young therapy horse she's had since he was born, stands next to Cowboy, a Kiger mustang whose parents were born in the wilds of the Steens Mountains. A good friend of Harty's donated two of her horses to the program when she was diagnosed with stage four pancreatic cancer. Her friend also went through hospice at the ranch, where she passed away. The horses include Patrick and Nitro, two draft horses named Dan and Duke, Bunny, and Biscuit, a miniature horse Harty said is used mainly for clients who are survivors of domestic violence.


"The miniature horse gives an opportunity to start small," Harty said. "It's less intimidating. Often, we start on the other side of the fence and work through fear, to trust the horse and then others.

"It works for kids who've experienced trauma as well. It's a good place to start," Harty continued.

Harty said she met the former owner of the ranch two years ago, who told her he'd been looking for her—someone to run his equine therapy ranch.

"The old owner turned 60 and had a heart attack and died," Harty said.

She said the former owner's nephew inherited all four of his properties and asked her if she wanted to buy one or all of them. Harty purchased her property last October.

The north end of the property was once used as an indoor marijuana growing operation, but it's since been repurposed into an indoor riding area where clients can do therapy Harty has plans to make a yoga studio with clear siding so clients can look out at the beauty of the mountains and an area for people to get battlefield acupuncture—a version of acupuncture primarily used on veterans, involving insertion of five semi-permanent needles on the ear.

Clients of the wellness ranch

Harty isn't a turn-and-burn counselor. She only takes one patient at a time and 10 clients total per week. Her patients range from veterans suffering from post-traumatic stress disorder, to young children who've been bullied at school, to sexual trauma victims.


Harty has unique dual certifications as an equine specialist in mental health and learning as well as a Certification as a mental health professional from the Equine Assisted Growth and Learning Association and a military designation (military competency and military culture certification) through EAGALA.

Several of the people Harty sees are veterans with PTSD. Harty said working with veterans can be frustrating because of the length of time it takes to get them approved to see her. She said one of her clients is a "cash patient," though she sees him for no cost—even though he tries to pay for his visits.

Harty also works extensively with people who lived through sexual trauma as children. One example of the therapy's success: a woman was referred to Harty with a diagnosis of complex trauma indlucing agoraphobia (fear of leaving one's home) as well as learning disabilities.

The client (whose name is being withheld due to patient privacy) started coming to equine assisted psychotherapy as an adjunct therapy in March. After five months of the therapy, the client is able to look people in the eyes—she was unable to do so before—and is working toward getting a driver's license, exploring living independently and considering attending college classes.

"Doing equine therapy has helped me to learn and blossom," the client wrote in a letter provided by Harty. "Before I started equine therapy, I bottled up my frustration and I would cry a lot. I was not comfortable leaving the house and would get frustrated easily with my family.

"I have been getting lots of practice outside my comfort zone I now am able to make eye contact and am more comfortable talking to men," the client wrote.

Another example comes from a teen who said they were sexually assaulted. The teen said therapists in offices were always pushing at her to talk about her trauma.

"After a miserable few months of seeing many therapists, I got worse and began self-harming and became suicidal," the teen wrote. "My mom took me to see Tammy. After we got around the horses, I felt safe and relaxed for the first time in forever.

"I went from an introvert severely depressed and anxious person who could not speak up for herself and trusted no one to a confident, self-loving, outgoing person who acted in a play and went to a job interview," the client continued. "There are huge changes in my life. I overcame everything and did it with NO medications!"

Harty said everything her clients do is done in a safe, supportive environment, which she says is very helpful with survivors of domestic violence taught in the context of the horse.

"Be aware, step away, move, don't freeze, speak up and speak your truth," Harty said.

Before her life helping people deal with PTSD, assault and violence, Harty was in construction and land development. She spent six years on the Deschutes County Planning Commission and is still involved with the Deschutes Soil and Water Conservation District.

"I've been involved in water issues for 20 years," Harty said.

Harty said it costs her about $2,500 per horse each year to feed them and keep their feet well. With eight horses to keep, that's $20,000 a year to maintain that key therapy component.

Harty said she also relies on volunteers to keep the operation running. Two volunteers—both women and both veterans—come out regularly to clean pens and brush horses.

"I couldn't do it without them," Harty said.

Christmas is this week. With all of the bad headlines out there—mass shootings, violence, political drama—seeing one person giving back, taking their pain and pointing it toward healing and helping others can offer a more uplifting view of the news.