Werewolves and Biscuits and Dancing, Oh My!

This wasn't a very good year, for humans or for life on Earth in general. There are still a lot of unknowns heading into 2021, and not just when it comes to cinema and movie-going. How did it feel for everyone else, watching movies you know were supposed to open in theaters (like "Soul" and "Wonder Woman:1984") on a streaming service the day of its release? Did it feel weird for anyone else but me?

The theatrical experience is going to change, and that's good. It should. Corporate mega-chains like Regal and Cinemark aren't really interested in making the communal experience of cinema into something other than a business transaction. They have no reason to care. The chains have gotten a little better over the years and I think Regal did a good job trying to keep people safe when they reopened for a month, but on a local level, look at how Tin Pan Theater curates the experience to try to make the space feel like downtown Bend's living room, or how the Odem Theater Pub feels like a loving throwback to neighborhood theaters of the 1960s and '70s. 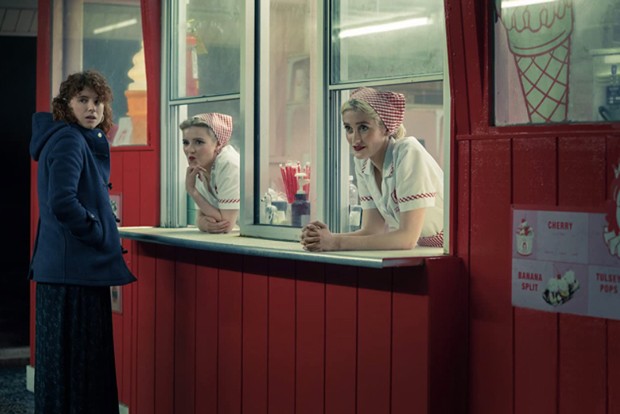 If cinemas die, then it will change how movies are made forever. Blockbusters won't be able to make a billion dollars and budgets will shrink. There's no reason for Disney to make something like "Avengers: Endgame" if the endgame is being added to Disney+ on a random Friday night. Mid-level and low budget movies might find bigger audiences, but the streaming services will be so packed with content that they could also easily be lost in the shuffle.

Everything is in flux.

I only saw one of my top 10 movies of the year in the theater, and I was the only person there. But regardless of the size of the screen or whether we saw the movie with a thousand people or just our quaranteam, there were still some truly beautiful movies that came out this year. The art of filmmaking is alive and well even as the business of making and showing movies suffers greatly.

#10: "Underwater" A throwback to those '80's creature feature programmers like "Leviathan" and "Deep Star Six" that hits every single underwater adventure button I love. Also, Kristen Stewart versus massive Lovecraftian monsters needs to be a genre from now on.


#9: "Babyteeth" A deeply humane drama about a terminally ill teenager finding her first and only love in the arms of a drug dealer. A simple story, beautifully told.

#8: "The Vast of Night" A teenage switchboard operator and DJ hear strange signals coming from the sky at the beginning of the space race. This feels like a 1960s radio play come to life.

#7: "Relic" Three generations of women deal with dementia, loss and grief while trapped in a metaphorical and literal haunted house. I haven't been able to stop thinking about this film for months.

#6: "The Wolf of Snow Hollow" An alcoholic small-town sheriff has to mentally prepare for the slow passing of his father and the killings of locals by what appears to be a werewolf. I know it doesn't sound like it, but this is easily the funniest movie I saw all year.

#5: "Ma Rainey's Black Bottom" The final performance from Chadwick Boseman proves for all time that he was a giant of cinema with barely a dozen performances to his name. His work here is timeless.

#4: "Soul" Pixar once again takes a deeply emotional and iconic look at death, but through the lens of what we leave behind in life. Their best film since "Inside Out" and something I will watch countless times in the future.

#3: "Small Axe: Lovers Rock" This entire movie is set at a sexy, sweaty and grinding dance party in 1980s London. In a year without live music, this movie feels like a revelation and a revolution, while also saying more about racism, classism and sexism than any film to come out in ages.

#2: "First Cow" A story of friendship and biscuits across the Oregon Territory in 1820. Slow-moving, meditative and quietly profound, at a time when I felt the most alone and isolated, this movie made me feel held.

#1: "I'm Thinking of Ending Things" There was no other choice. Charlie Kaufman takes on a break-up drama but makes it an existentialist fable about perception and choice. This film is a puzzle where none of the pieces match, but all of them do, except you weren't putting together a puzzle, you were looking in a mirror.

Looking back on my list I guess it's not surprising that most of the movies I loved this year at least touched on themes of loss and isolation and loneliness. That's how I felt for a lot of this year and these movies helped me in one way or another. That's what movies should do: make you feel. Even if you don't like the feeling and even if it scares you or upsets you, the fact that moving pictures can change you is legitimately miraculous.

The year 2021 will be a different kind of year than any of us can predict, but we are alive and in this together. There are many things on this Earth more important than movies, but nothing can remind us of that more beautifully.