Wetlands Are Enticing - Checking out the Crooked River Wetlands Project 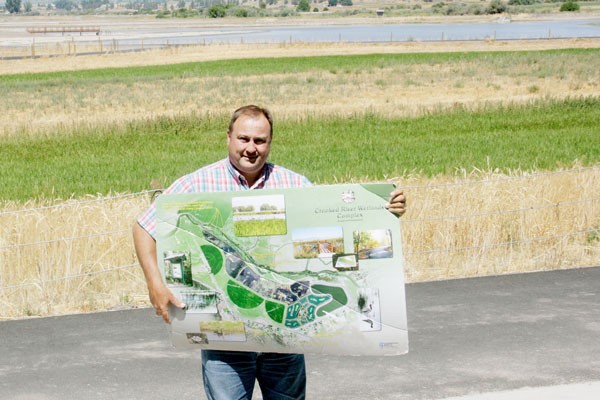 omorrow morning, when you tumble out of bed, grab your bicycle, lunch, binocs and camera and head for the Crooked River Wetlands off O'Neil Road between Terrebonne and the city of Prineville.

The Crooked River Wetlands Project is one of the most wonderful things to happen to Central Oregon in a long, long time. It's magnificent! If someone had told me Eric Klann of Prineville High School would go to Central Oregon Community College for a year, then end up at Oregon State University graduating with a mechanical engineering degree, eventually working in his hometown in the water department, I'd have said, "No way!"

But Klann did just that, and more. To show what a sparkplug he is, he and his 19-man crew replaced the original 1940 wooden freshwater pipeline that carried water to homes in Prineville with the new, modern, safe plastic lines and ended up saving over 150 million gallons of water pumped from the Prineville wells—each and every year. And that was just the beginning.

When Klann and his team looked at the two options for handling wastewater, mechanical or sewage ponds, the cost of mechanical put that one out of sight. So, they kept the ponds Prineville was already using, which gave life to the wetlands project.

Before Klann started the design of the wetlands, he put together four different groups to tackle certain elements.

Second, education and recreation, involving Klann's wife, Sarah, a teacher, and other federal and public school and various trails groups.

Fourth, vector control, principally about mosquitoes. By keeping the water cool and in bigger and deeper quantities than most sewage ponds, they wouldn't become breeding ponds for mosquitoes. In addition, the bird habitat would gobble up mosquitoes. Swallow nesting boxes built and installed by the middle school put the fear of not enough birds to eat mosquitoes out of the picture. It must be noted that Klann hasn't forgotten the role of bats in mosquito control, either. During the discussion of the pestiferous insects, he said, "Oh, yes, we also plan to put up as many bat roosts as possible." If Klann says there will be bat roost boxes, there WILL be bat roost boxes.

The plans for using the wetlands for education have already been put into motion. On Aug. 14, 22 youngsters from the U.S. Forest Service Children's Forest project were doing their first-ever macro invertebrate study on the water of Crooked River, flowing through the wetlands.

Bess Ballantine, outdoor teacher with the Children's Forest, accompanied the children on a "Discover Nature Day." "Kids helped catch macro-invertebrates and identify what was there," Ballantine said.

Then there is the work that the first wetlands volunteer, Jim Van Vlack, is doing to get the educational and docent programs underway. Van Vlack, a key volunteer for the Sunriver Nature Center in the '70s and '80s, says, with his usual enthusiasm, "The possibilities for educational opportunities are limitless!" And to prove it, he and his wife, Maryann, are putting that into reality with the docent handbook they're about to finish.

t must be noted here that Klann had to surmount an 18-inch-high pile of permits (literally) to get the job started. That in itself would probably have discouraged someone to undertake such a project, but not Klann.

In the permit to tamper with the waters of Crooked River, for example, Klann and his advisory group found—by studying the geology of the old floodplain—that the water purified in the wetland ponds would force additional fresh, cool water into the river's flow, enhance the salmon fishery already underway, and replace water removed for irrigation.

On the same day the Children's Forest group was investigating the macro invertebrates of the Crooked River, Nancy Sheldon of Redmond was taking a leisurely hike on one of the trails, enjoying the solitude and new sites of her fist visit. As she was leaving, she noticed some birding pamphlets adjacent to the parking area.

Master Birder Chuck Gates used many of his photographs and his years of counting birds at the old sewage plant and the new wetlands to compose a "Crooked River Wetlands Bird List." As Sheldon was leaving, she took one of the pamphlets and said, "You just never know, the next time I'm here for a hike, I may take up bird-watching."