If you were looking for the lowest bar for comedy, it's right here 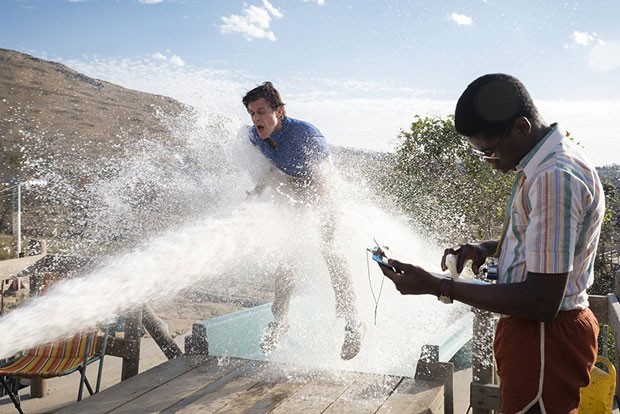 There's a moment toward the end of "Action Point" that encapsulates why the film is such a huge missed opportunity. It only lasts for a few seconds and there's zero context for the image, but there's a beautiful slow-motion shot of a terrified little kid riding an ostrich and hanging on for dear life. That's the movie "Action Point" sold me in the trailers, and that's what I wanted: something a little stupid, a bit dangerous and deeply hilarious.

The concept of Johnny Knoxville running a dangerous amusement park is golden, but the film adds in weightless family drama and terrible dialogue instead of focusing on what makes his movies hilarious: pain. This is a guy who's broken more bones than he can count and tore his urethra for an episode of "Nitro Circus." Watching him in "Jackass" and "Bad Grandpa" is entertaining because he's somewhat indestructible. We know he might rupture his scrotum while bullfighting, but that would never stop him from getting fired out of a cannon two weeks later.

"Action Point" places the stunts of "Jackass" into a scripted gross-out comedy along the lines of "Freddy Got Fingered." Combining stunts with a real movie worked for "Bad Grandpa," but the actual jokes and characters in "Action Point" are so terrible that the only time the movie is entertaining is when people are flying through the air, injuring themselves. Sadly, a good 90 percent of the stunts are spoiled by the trailers.

There's always been something subversive about the "Jackass" boys, but "Action Point" feels safe, contrived and extremely gross. If you're looking for scenes of dogs graphically humping, human semen dripping onto Chris Pontius or gaping leg wounds caught from jagged waterslides, then I guess this might be the movie for you.

Eleanor Worthington Cox plays Knoxville's teenage daughter, who comes to stay with him for the summer. Cox, 15 at the time of shooting, is so grossly sexualized that the movie's deeply uncomfortable whenever it deals with her "not being a little girl anymore." It's one thing to sexualize a teen if it's a coming-of-age story, but watching 40-year-old men waggle their eyebrows at Cox's tampons made me sick to my stomach.

I think the missing ingredient here is Jeff Tremaine, who directed all the "Jackass" movies and "Bad Grandpa." He never lets the energy die down and knows that the humor comes from brave and stupid men hurting themselves for our amusement. If Knoxville had more ambition, he could have been something closer to Jackie Chan instead of what basically amounts to a cross between a rodeo clown and a rockabilly gutter punk. He'd certainly be doing something better than this.

"Action Point" is garbage. It's crass and offensive in a bad way instead of the way that makes you feel like you found something truly dangerous on a hidden corner of the Internet. I'll still always watch another "Jackass" movie as long as they keep making them, but this was my last dollar spent on something that made me feel like a bad person for watching it.