What Goes Up Must Come Down | Natural World | Bend | The Source Weekly - Bend, Oregon

What Goes Up Must Come Down

The Crooked River is one of Central Oregon's most iconic fishing destinations, winding through stunning basalt gorges and beautiful high desert terrain. It used to be a dependable trout fishery that would draw fishermen from across the region.

But what goes up, must come down. 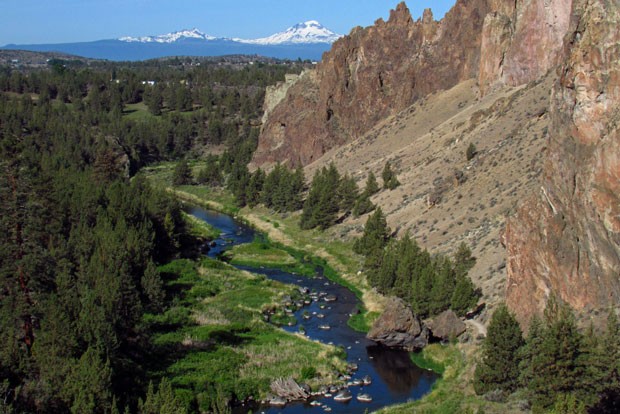 In 2015, the Oregon Department of Fish and Wildlife surveyed the Crooked River, documenting around 1,400 Redband trout per kilometer. The next year, they found fewer than 200. This not only affected the river's ecosystem, but guiding services at local fly shops lost revenue as well.

According to ODFW, the most devastating factor contributing to the decline of the population of fish in the Crooked River are the flows released from Bowman Dam. The timing and volume of water discharged from the dam can be incredibly destructive to the variety of species flourishing in that habitat. This is the case for the decline of the Redband trout.

Limited snowfalls in 2015 triggered low flows from Bowman Dam, in turn starving the trout of oxygen and nitrogen, killing off large numbers. The following year was one of the highest snow years ever documented in Central Oregon, releasing large quantities of water into the river.

The high flows saturated the water with nitrogen, causing air pockets to build up in fish tissue. This is called gas bubble disease and it was the leading cause for the decline in 2016.

While the Crooked River has historically been a popular fishing destination, this decline drastically altered regional interest in the stream. In turn, the amount of business local fly shops received dwindled. People would come from all over the Pacific Northwest to be guided on the Crooked, but news of the decline deterred their plans to visit.

I interviewed Dave Merrick, the retail manager of local fly shop, Fly and Field. He said media influenced out-of-town fishermens' perspective on the Crooked's fishing quality. He had several clients who called him, inquiring about a fishing trip in Central Oregon. He noted they were surprised when he suggested the Crooked, thinking the fishing opportunities there were long gone.

But this decrease is not a one-time event. Many smaller declines on the Crooked have occurred in the past. The Crooked is even suffering through one right now. While flows last year were around 1,500 cubic feet per second, current flows are as high as 3,000 cfs, proving fatal to the fish population. This is due to an unusually high spring runoff.

The decline of the Crooked River Redband trout population has affected more than just the stream's ecosystem. From environmental effects to the Bend economy, the decrease in 2016 has left a mark on Central Oregon. I write this article to bring attention to the many declines riddling the past of the Crooked River. Another decline on par with the one the Crooked has just suffered through could be severely destructive to the health of this coveted stream.

-Alex Laakmann is a budding naturalist and writer who attends Seven Peaks School in Bend.