What to do about outdoor cats? | Natural World | Bend | The Source Weekly - Bend, Oregon

What to do about outdoor cats?

If you're dealing with feral or outdoor cats in your own yard, here's what to do—and what not to do 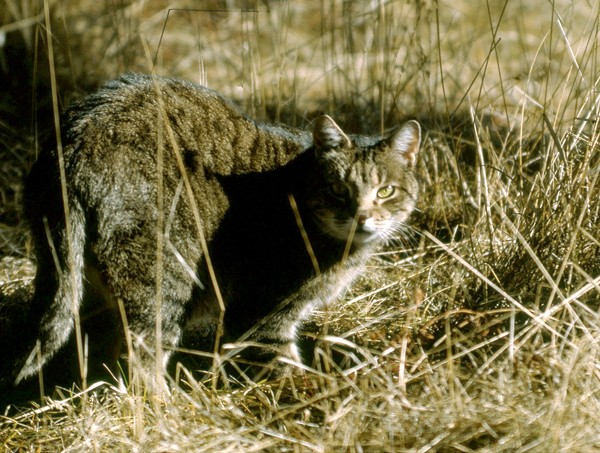 A somewhat recent news story featured a dead cat, hung over a fence for all to see. Very sad, but one-sided. Sure, the guy who did it was wrong—very wrong—and broke the law killing his neighbor's cat. But what about the cat, who was trespassing on that neighbor's and others neighbors' private property?

As readers of this column know, I'm a birder and therefore don't like pet cats killing birds. But it doesn't stop there. Wildlife rehab clinics care for cat-maimed native wildlife, from birds and lizards to chipmunks, to cotton-tails and jackrabbits. It's what nature designed cats to do—kill things.

Every day I have the same problem at my home that the guy who killed the cat does. I used to have not only my neighbor's cats killing "my" birds, but I put up with a couple of feral ones as well. I'll tell you, I do not have sweet cuddly feelings for cats when I see them running off with wild lizards, chipmunks, cottontails and birds, or, as happened the other day, leaving my place with a half-grown jackrabbit in its jaws.

I use a big, plush live trap to capture cats on my place. Then I hose down said cat with the garden hose, shout at it while rocking the trap, then turn it loose. That works for a little while, but, cats being cats, about two weeks will go by and they're back at my place killing wildlife. That's what outdoor cats do. They can't help themselves.

I know this next statement is like swimming up Niagara Falls, but really, cat owners MUST take responsibility for their cats' actions. That's what bothered me about the news broadcast. The cat owner (and the law) heaped fire and brimstone on the guy who killed the cat, but not one word was said about the cat killing wildlife, and the owner's responsibility to keep it home, where it belongs.

There are (literally) thousands of house cats in Deschutes County, and most of their owners do try to control their actions. Those that keep them indoors are, in my book, courageous people and good neighbors and I am grateful to them. But others who just allow (and yes, that's the correct term, "allow") their cats to go wherever they want—and do whatever they want— are hard for me to love, and, in my opinion they're breaking the law as much as the guy who killed his neighbor's cat.

If your neighbor tells you to stuff it, or yawns in your face, obviously, you're swimming upstream. Then I'll loan you one of my live traps. Set it up under your bird feeder. Bait it with a small piece of fried chicken, and when you catch said cat immediately take it (alive) to the Humane Society of Central Oregon. tweet this

Years back, I went over to a man's house in Sisters to help him capture loose bats in his home; somehow, they were getting into his living room. Ultimately, we solved his problem, but while doing so we had to keep his cats in another room as they were hell-bent-for-leather on getting those bats. When I asked the fellow about his cats going outdoors, his response was astonishing. "Oh," he said very quickly, "I love my cats too much to let them go outdoors."

We'll probably never stop cat owners from allowing (and at times, encouraging) their cats to go out and kill indigenous wildlife. Even though too many cat owners are breaking wildlife protection laws by allowing their cats to kill and eat chipmunks and wild birds, the owners just want their cats to be happy.

If you're putting up with a feral or outdoor cat killing your birds (and I use the term, "your/my" birds because, like me, you're likely feeding them, and no doubt have a delightful water feature for them to drink from and bathe in—therefore, they're your responsibility to care for, as the cat owner also has the responsibility to care for his or her cat) here's what I would do: I'd have a heart-to-heart talk with your neighbor(s) about the behavior of his or her cat(s) coming over to your place killing things. Not only is it unlawful to allow cats to kill protected wildlife (just as unlawful as the guy who snared his neighbor's cat), it's not neighborly, either.

If your neighbor tells you to stuff it, or yawns in your face, obviously, you're swimming upstream. Then I'll loan you one of my live traps. Set it up under your bird feeder. Bait it with a small piece of fried chicken, and when you catch said cat immediately take it (alive) to the Humane Society of Central Oregon.

It's not going to cost you anything to leave the cat with them (but I do suggest you leave them a donation for all the good work they do). If your neighbor asks about his or her cat, tell them where it is, where it was live-trapped and why. It's going to cost the cat owner some money to bail it out, which might help them to keep the cat at home.

No one gets hurt, the law is satisfied, cats are no longer an ugly sight in your backyard killing "your" state and federally-protected wildlife, and owners become responsible for their cat's actions. Easy as that. Who says you can't swim up Niagara Falls!