Want to know when we can get out of the latest lockdown? Here's a primer

December 04, 2020
1 comment
This week, people in 25 of Oregon's 36 counties learned that their counties fell under the "extreme" risk category in Gov. Kate Brown's newest framework. The new framework charted out what restrictions businesses and individuals would be subject to, based on the severity of COVID-19 in their areas.

Businesses in counties in the "extreme" category, for example, are limited to only outdoor dining, while those in the "high risk" category can return to indoor dining at 25% capacity. Indoor recreation and fitness centers stay closed under extreme risk and can open at 25% capacity under high risk.

We know that Deschutes, Jefferson and Crook counties are among those in the "extreme" category—but what does that mean, exactly... and what needs to happen to see us move into less-extreme categories? This info may help. tweet this

We know that Deschutes, Jefferson and Crook counties are among those in the "extreme" category—but what does that mean, exactly... and what needs to happen to see us move into less-extreme categories? This info may help. 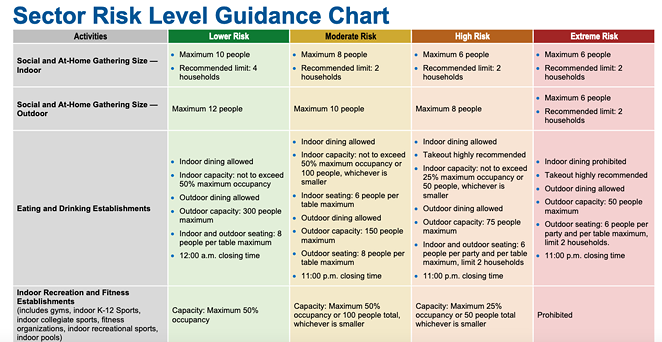 Sorting out what's what has been a bit confusing, even for us, who get the pleasure of sorting through charts, tables and press conferences on the subject almost daily. But here's what we know:

- Counties with populations over 30,000, including Deschutes County, that are in the extreme risk category need to see a case count average of fewer than 200 cases per 100,000 over 14 days to move down to the next level of risk—OR a test positivity rate of less than 10%. If one metric would put a county in one category versus another—such as if the cases per 100,000 showed worse outcomes than the test-positivity rate, for example, the state would keep that county in the higher-risk category.

Counties with 15,000 people, and up to 30,000 people—which applies to both Crook and Jefferson counties—will be evaluated based on the total number of cases or the test positivity rate, with the higher (or worse) metric being the one that puts a county in one category or another. Counties with fewer than 15,000 people will be assessed based on the number of cases over a two-week period.

According to the most recent data from the Oregon Health Authority, Deschutes County clocked in at 374.1 cases per 100,000 people, with a test positivity rate of 7.1%—putting it squarely in the extreme category.

State officials will publish new data on county case counts every week, but will only re-assess risk levels every two weeks. With these numbers being so crucial for seeing businesses in Central Oregon and the wider state reopen, we'll track and publish the latest information in our daily newsletter, Cascades Reader, every day.

Stay on top of those numbers by signing up for the Cascades Reader here.