The complicated business of naming beers 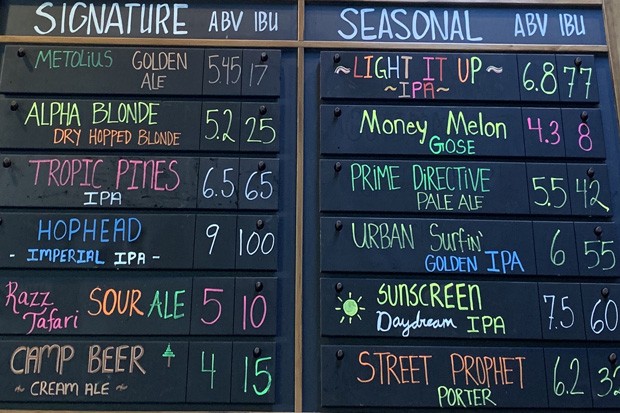 The old idiom, don't judge a book by its cover, could just as easily apply to beers and their names—but to be honest, who hasn't been seduced by a colorful dust jacket or a whimsical beer name? People respond to a beer's name long before they actually taste the beer, and it can often be the catalyst for what beer a person actually orders. Brewers know that a bad name can doom a great beer.

When most towns only had one or two breweries, local landmarks, favorite hiking trails and town history lent themselves naturally to beer names. Think Black Butte Porter or Elk Lake IPA. Many breweries simply used the beer style as its name, favoring to highlight the brewery name instead of the individual beer. Think Bridgeport IPA (RIP) or Full Sail Amber. But as beer lineups expanded to include multiple incarnations of the same style, while new breweries continue to open, naming a beer became harder than creating a new beer.

The first challenge in naming a beer comes in finding one that hasn't been used already, and not just used by another brewery. Cease and desist letters from corporate lawyers representing coffee companies, restaurants and wineries have become a far-too-common occurrence. Crux was forced to change its flagship Outcast IPA's name to Cast Out IPA after running into a trademark issue in 2015, and they're far from alone.

The next challenge is finding a name that resonates with people. While pop culture references and bad puns are increasingly popular, they don't tend to age well. Silly names tend to signal that the beer itself isn't to be taken seriously. Inside jokes may be funny to the brewery staff but don't always translate to the general public and can even spark outrage. Riverbend's unfortunately named Fudge Me Berry Hard created a swell of controversy related to its accompanying artwork (I'll let you use your imagination). Many other breweries have run into similar controversy over beer names that reference everything from gang violence to vile misogyny.

So what makes a great beer name? My goal has always been to find a name that's strong, easily remembered, speaks to both the brewery's brand and the beer itself, and hasn't been used by another brewery. Easy, right? Well, sometimes it is. Every so often, a name comes easily and instantly feels right, but those names are rare. At my workplace, we're constantly adding to two separate lists, one for beers to brew and one for beer names, but the lists never seem to match up.

Finding the perfect name for a beer that won't end in a lawsuit or social media backlash is just another challenge that breweries face in the ever-changing and highly competitive landscape of beer in 2019. What's in a beer name? More than you would ever expect.