What's Next for the Council? | Local News | Bend | The Source Weekly - Bend, Oregon

What's Next for the Council?

According to the latest unofficial results released by the Deschutes County Clerk, Russell took 50.18 percent of the vote—amounting to 21,666 votes as of Wednesday morning. Next in line was fellow councilor Bill Moseley, who earned 40.88 percent of the votes, or 17,244 votes. Third was disabilities advocate Brian Douglass, earning 3.57 percent of votes, followed by attorney Michael R Hughes with 2.24 percent of votes, photographer Joshua Langlais with 1.96 percent and local activist Charles Webster Baer with .76 percent. Official election results have not yet been released. 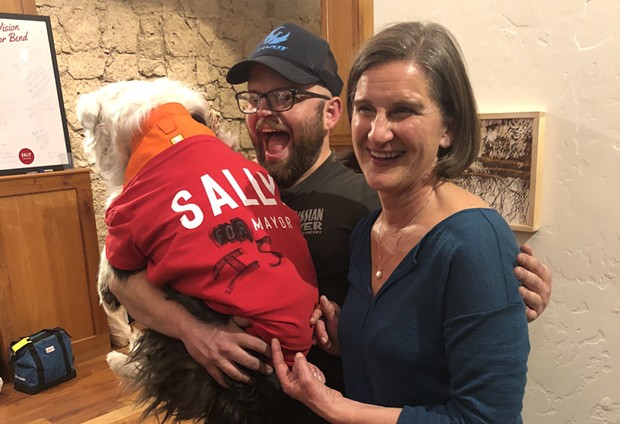 As the two sitting councilors, both Russell and Moseley were highly visible in the race. Russell talked often during her campaign of establishing consensus among stakeholders and listening to constituents; Moseley's campaign discussions leaned toward discussions of fiscal accountability and better goal-setting and planning for the council.

The race represented a shift in the way Bend chooses its mayor. In May, voters in Bend voted in favor of changing the city charter to allow for a directly elected mayor, rather than allowing city councilors to choose a mayor from their own ranks. Some saw the move as a reflection of Bend's continuing growth and expansion.


Learning from the Election


For Moseley, he says talking with residents during election season helped him get more ideas about Bend's needs.

"From the election, I gathered that a majority of residents want a rapidly urbanizing, progressive community following the policy lead of Portland and other west coast cities," Moseley told the Source in an email Wednesday. "I learned about regional challenges with homeless camps and public safety near Juniper Ridge by walking those neighborhoods. I learned about the personal impacts of the septic-to-sewer issues from folks in the SE."

Russell says this year's campaign was at times "caustic," but now that she's been named mayor, she cites affordable housing and transportation as some of her priorities.

"All through my campaign I talked about making sure we have transportation for everybody—according to your watch and your wallet. Obviously, we need to focus then on the transportation advisory committee work, moving it forward, bringing it out into the community," Russell said Wednesday.

She said conversations throughout the campaign helped her shape her approach moving forward, including learning more about the value of the Neighborhood Leadership Alliance, helping people engage with public process, finding new ways to work with the community on managing tourism while at the same time keeping community values, managing growth that's compatible with community values and managing public safety budgets and service levels.


With Russell moving into the mayor's seat, a seat opens up on the general council—one that will be filled by appointment by the council in January. When a vacancy comes up in the city council, Bend City Code requires the position to be filled within 30 days.

It's up to the council to decide what type of process they'll lay out for that new appointee—though Russell stressed that the process would need to be a transparent one.

"For me, there's some questions: how do we do this and move through it effectively through a really short timeline, and not have it just an insider's game," Russell said.

Of the process for selection, City Recorder Robyn Christie said in an email, "I anticipate they will request applications, similar to those we use for advisory boards, and a letter of interest."
While he didn't win the mayor's seat, Moseley will continue to serve as a city councilor until 2020. When asked what he'll be looking for in a council appointee, he said: "I’ll want a councilor that reflects the majority – perhaps in the same vein as Gena or Sally.  Maybe someone like Moey Newbold?"

The city council was set to discuss the council appointment with City Manager Eric King at Wednesday's council meeting.