What's Up with Bend's Whitewater Waves

If you're new here, or just looking for ways to ride the waves, here's what to know right now

If you're a kayaker, some pretty exciting new initiatives are happening in the Bend Whitewater Park these days. Here's a quick rundown of what's offered every day at the park for kayakers, followed by a listing of meetups, courtesy Adam Eno, the park's newest wave shaper.

What to expect from each of the four waves in the center, whitewater channel of the park (from upstream to downstream): 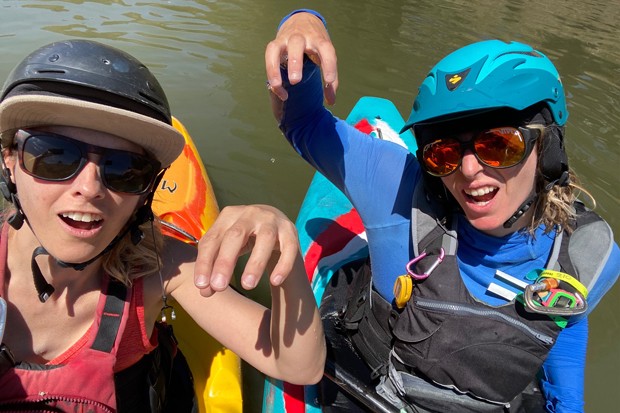 Eddie's wave: This feature is what kayakers call a "hole." Holes can be fast, dynamic and can give the user a ride.


This hole is "friendlier than it looks," Eno says. "If you go upsidedown it will spit you out," he says, sharing from his 10 years' experience raft guiding, five years kayaking and lots of months on the features themselves. Whether practicing surfing out of a hole or training for aerial moves, this feature offers the most potential for progression for more advanced boaters, especially if you're bored with the other park waves.

Green wave: This feature is good for practicing kickflips while traveling downstream. Eno notes the hole behind the wave is super deep and suitable for throwing ends. Here kayakers can practice intermediate moves like loops. This feature is also the favorite of surfers.

Jason's wave: This is the friendliest feature in the park. Every Wednesday, and after noon on weekends, this feature is tweaked to be the easiest wave in the park. On other days, it's a hole. Even in the hole configuration it will immediately flush capsized kayakers.


From 6-8pm wave shapers are crashing the Green wave. Show up and try different variations and shapes, with the waves catered toward kayaks (though all users are welcome to join).

"We are trying to see if we can find new shapes to the Green and Cricket's waves that are more exciting to kayakers—different configurations," explains Eno. He says shapers will continue this program as long as kayakers show up or as long as there is enough water flow/ cubic feet per second in the river (When Wickiup Reservoir, from which these portions of the Deschutes River flows, runs out of water—timing currently set for mid to late August—the status of this program is uncertain).

In timing with Jason's wave at its best for novice boaters, longtime locals meet up for a Wednesday night social from 6-8 pm. Join a friendly beginner, intermediate and expert crew. Head out freestyle or meet around the grassy knoll just above the beach at McKay Park. Kayakers mill about and chat, eventually putting in above the fish ladder. Intermediate and advanced boaters lead beginners in drills on the flatwater, then head down the fish ladder together working on catching eddies and encouraging each other.

Related Winter + Whitewater: Books to inspire your love for all things river and ocean—no matter what the winter weather might bring

Winter + Whitewater
Books to inspire your love for all things river and ocean—no matter what the winter weather might bring
By K.M. Collins
Outside Features

The Brown Claw Society of Bend

This is a long-awaited whitewater kayaking Facebook meetup page friendly to, and skewed toward, beginner and intermediate interests. The mission states: "Fostering and promoting the interests of recreational paddlers, building an epic whitewater community that also includes education, and preservation of the wild spaces and places we love to enjoy, especially our rivers!"

This is a place to reach out to other boaters for learning together, sharing photos, asking for gear advice and planning trips. In a sea of class 4 and 5 boaters, many find it refreshing that former raft guide and dedicated nurse, Alison Fountain, is taking the initiative to organize and be inclusive to newbie boaters. Rumors of eventually organizing into a formal club, like those in other cities (for which Bend is still lacking) are afloat.

Reminder: Share the fish ladder (furthest channel river left), with all users including tubers, kayakers and swimmers. Think about outfitting your child with a helmet and life jacket if they are swimming anywhere in the park. Honor and respect the habitat channel (furthest channel river right). For more on best practices, park history and safety details, see the Bend Whitewater Page on the Bend Park and Recreation District site: bendparksandrec.org/facility/bend-whitewater-park/.