When every drop Count$ | The Source Weekly - Bend, Oregon

When every drop Count$

Flint, Mich. might be considered the modern-day poster child for contaminated water; images of murky brown fluids, pouring out of taps like chocolate pudding, splattered all over the news. Then-President Barack Obama called a state of emergency over the city's water supply. Children contracted mysterious illnesses. Lead, byproducts of disinfectants and a cancer-causing slurry of total trihalomethanes were found in the water.

But water issues hit closer to home, too.

Last May in Salem, toxins from algae were found in the North Santiam River, which supplies drinking water to Salem and other nearby towns. Children and the elderly were told not to drink the water because it could cause stomach ailments, akin to an aggressive version of the flu.

Congress passed The Clean Water Act in 1972, a few years after Ohio's Cuyahoga River literally caught on fire on a Sunday morning in 1969, due to an oil slick from years of industrial waste. The Act, according to the Environmental Protection Agency, passed to maintain the "chemical, physical and biological integrity of the nation's waterways." It largely prohibits the discharge of pollutants into the country's "navigable rivers. Defining "navigable rivers" is something successive administrations, special interest groups and the U.S. Supreme Court have fought over since.

On Dec. 11, the EPA announced—along with the Department of the Army—its proposal to create a "clear, understandable and implementable definition of the 'waters of the United States' that clarifies federal authority under the Clean Water Act."

The issue has ties to states' rights.

"Our proposal would replace the Obama EPA's 2015 definition with one that respects the limits of the Clean Water Act and provides states and landowners the certainty they need to manage their natural resources and grow local economies," Andrew Wheeler, acting EPA director, said in a press release. "For the first time, we are clearly defining the difference between federally protected waterways and state protected waterways. Our simpler and clearer definition would help landowners understand whether a project on their property will require a federal permit or not, without spending thousands of dollars on engineering and legal professionals."

The proposed changes stand in stark contrast to the Obama administration definition of 2015, which aimed to widen federal clean water protections to include not only the large waterways, but also the smaller streams and tributaries that feed into them.

An "attack on clean water"

Celeste Meiffren-Swango, state director for Environment Oregon, said after the EPA's announcement that the "Dirty Water Rule" is the most extreme attack on clean water in recent memory.

"The health of the Columbia and other rivers in Oregon depends on the streams that feed them and the wetlands that filter out pollution," Meiffren-Swango said in a release. "By stripping federal protections from streams and wetlands, the Dirty Water Rule would put critical waterways and our drinking water at risk of pollution. It defies common sense, sound science and the will of Oregonians."

"This proposal is reckless," Natural Resources Defense Council's Jon Devine said in a statement. "Given the problems facing our lakes, streams and wetlands from the beaches of Florida to the drinking water of Toledo, now is the time to strengthen protections for our waterways, not weaken them."

A tie to affordable housing

Although most of the environmental groups chaff at the proposed changes, not everyone is against them.

"By bringing certainty and clarity to which waters fall under federal oversight, this proposal should help accelerate the permitting process so home builders can more easily provide safe and affordable housing," Noel said in a statement. "Finalizing this revised WOTUS definition will protect our nation's waterways without adding needless regulatory burdens that will hurt housing and other industries that depend on a predictable permitting process."

Tyler Neese, government affairs director for Central Oregon Association of Realtors, said the proposed changes provide more clarity and consistency in regard to the permitting and development process.

"It is our hope that this rule will provide that, while protecting our water quality and property rights," Neese told the Source in an email. "But as with any legislation, time will tell. We need a healthier supply of housing, which is generally about six months. In Bend specifically, we're currently hovering around three months for all residential property types. If we drill down further, the picture is even more bleak—at $425,000 and below, about 1.3 months. In the $225,000-$325,000 range, less than that. To make an impact, that healthy supply should consist of a mix of housing—both rental and homeownership opportunities.

"Will this action help get us there? Not on its own," Neese said. "But if it helps support states and local jurisdictions and creates a path to effective regional solutions, it's a step in the right direction." 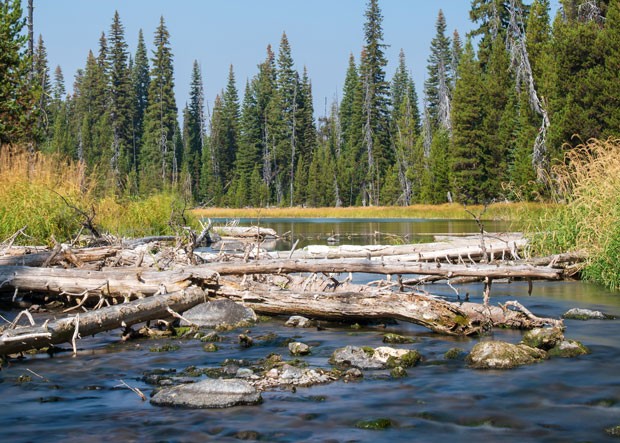 The City of Bend's primary drinking water source is the Bend Municipal Watershed, which gets its water from Bridge Creek and the Middle Fork of Tumalo Creek on national forest land near Broken Top. During the summer irrigation season, the City's water system taps into the Deschutes Regional Aquifer from the Upper Deschutes Basin. According to information from the City, groundwater—which wouldn't be federally protected any longer under the proposal—has provided about half of the total water production over the last decade, and the groundwater recharge zone along the Cascade crest also feeds the springs within Bend's watershed.

"From what we have read regarding the proposed changes to the Clean Water Act we do not see any negative impacts to our groundwater quality," Paul Rheault, utility director for the City of Bend said in an email. "We are fortunate in Central Oregon that before any surface water reaches the groundwater table it is filtered by the earth in a range that spans from 600 to 1,200 feet deep."

In Oregon, the Oregon Health Authority and the Department of Environmental Quality are tasked with protecting the state's drinking water through the federal Safe Drinking Water Act. DEQ's role is to implement the Clean Water Act to protect the sources of drinking water across the state. In practice, this means identifying the small watersheds and portions of aquifers that collect surface water and groundwater for each of Oregon's drinking water supplies.

In 2015, the Natural Resources Defense Council released a report that stated nearly 77 million Americans lived in places where the water systems were in some violations of safety regulations, including the Safe Drinking Water Act. Another problem, according to a story in The New York Times, is a lack of reporting when it comes to contaminated water to the EPA.

Just last week, the EPA said it plans to control a group of toxic chemicals found in America's drinking water, but stopped short of setting limits until later in the year. A class of common chemicals called PFAS that are used in Teflon and firefighting foam are linked to cancer, liver and thyroid damage, and other fetal and health effects, are winding up in water supplies, according to a story from U.S. News and World Report.

This could pose a risk to Bend's water supply if a fire broke out on U.S. Forest Service land and fire retardant got into the water supplies. For example, in 2002, a small fire broke out near the Fall River west of La Pine. A Forest Service plane accidentally dropped over a thousand pounds of fire retardant into the river, killing thousands of fish—and potentially damaging the Upper Deschutes.

According to a draft study by the Department of Health and Human Services last year, the risk level for exposure to PFAS should be at least seven to 10 times lower that the threshold recommended by the EPA.

"Has the Trump administration so thoroughly purged EPA of scientists, and so completely stacked its management with industry lobbyists, that it can't even decide whether to lift a finger to regulate widely-know toxic chemicals?" Erik Olson, senior director for health and food at the National Resources Defense Council, asked in a statement.

The public comment period for the EPA's proposed definition change ends on April 15.