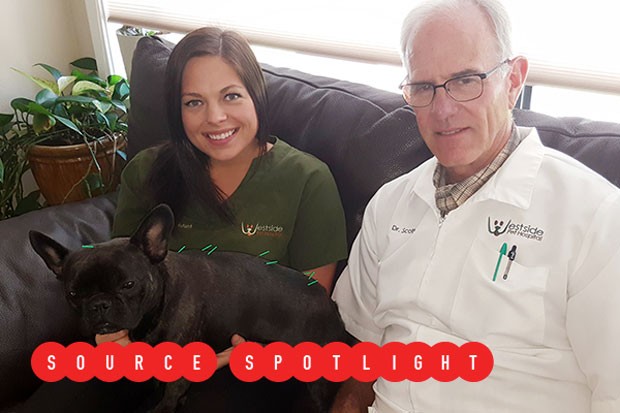 "I'm a very scientific person. You have to prove something to me to believe," Veterinarian Dr. Scott Shaw said as he described his first exposure to holistic medicine. "I had to take a leap of faith at first." Shaw had a few veterinary cases in which traditional Western medicine didn't provide a cure. "I tried alternative medicine and it worked. Not all things can be proved through scientific method," Shaw said confidently, as he sat back in the black leather couch inside his practice at Westside Pet Hospital.

It all started with a girl.

When Shaw was in sixth grade a girl invited him horseback riding; he enjoyed it so much that he started taking lessons. Eventually his family moved from San Jose to a rural area outside of the city where they bought a horse. Within six years they had eight horses, a goat, cows and chickens. At that time, a lot of old-time ranchers were doing trail rides in the hills of Silicon Valley. He worked at the stable cleaning stalls and became friends with the veterinarian, and then decided to become one. "I enjoy being intellectually challenged," said Shaw as he described why he picked his profession, "I like animals, I like being a detective and I like fixing things."

Shaw practiced traditional Western veterinarian medicine with both large and small animals before he discovered alternative medicine. "I wanted to provide services not available at other clinics," he said. "That's how I got involved in alternative medicine." Alternative therapies include acupuncture, Chinese herbs, homeopathy and essential oils. Chinese herbs and acupuncture are the big ones he uses. He says, "Both were developed for animals, then it went to people." Shaw describes acupuncture as a quick fix he uses with patients and Chinese herbs as a long-term cure.


"All these different facets of the disease, in Western medicine they are unrelated and in Chinese they are related to give you a picture of the imbalance." —Dr. Scott Shaw tweet this

"I start with Western medicine and go from there," Shaw says as he describes past cases. "Unless it's a long-term problem, then I would more readily offer alternative medicine as my initial approach."

A 14-year-old black lab came to Shaw who was acutely paralyzed. The dog had already seen a neurologist. An MRI and CT Scan uncovered degeneration of the spinal cord. After spending thousands of dollars to find out what was wrong, the only treatment available was an anti-inflammatory to alleviate the pain. Shaw used acupuncture and Chinese herbs and he said the Labrador "got a lot of his function back. It greatly improved the function of his rear legs. Western medicine could treat the symptom, but alternative medicine had a greater curative effect."

Another dog he treated had a problem with red eyes. "I treated conventionally with eye ointments for three weeks with no resolution," said Shaw. "I then treated with acupuncture and it resolved in one day."

Shaw looks at alternative medicine as additional tools in his toolbox. He remembers when he was seeing quite a few dogs for seizures and high doses of anti-seizure medication wasn't working. "I asked what time the seizure occurs," he said, "and with several dogs it was at one or two in the morning. Your chi circulates through your meridians and through your liver channel in the early morning. In Eastern medicine the liver controls seizures, and because of alternative medicine I could see the correlation between the two. By adding herbal combinations along with anti-seizure medication, we could control the seizures and eventually lower the dosage of anti-seizure medication because it can make the dog sick. It's bad for the liver." Shaw says this is when the light went on for him. "All these different facets of the disease, in Western medicine they are unrelated and in Chinese they are related to give you a picture of the imbalance."

Shaw went on to talk about a little Pomeranian that woke up and was paralyzed on three legs. After the owners went to a regular vet for traditional treatment and saw no improvement they went to him for acupuncture.

"The next morning their dog jumped on their bed," says Shaw. "I'm only taking a little bit of the credit, but I'd like to feel that I helped."