July 20, 2020
comment
The Rosland Road Fire burned nearly 400 acres, 4 miles northeast of La Pine over the weekend, and the smoke settled in around Bend on Sunday morning. As of Monday, the fire was 30% contained according to officials from the Deschutes National Forest. The cause of the fire is still under investigation.

The wildfire threatened the homes of 150 people living at Newberry Estates, a development at the base of Newberry National Volcanic Monument, with properties around 1 acre in size. Officials issued a “get ready” evacuation alert at 10 a.m. on Sunday, lifting it 24 hours later.

One hundred and eighty fire fighters helped out, including both the Redmond and Prineville Hot Shots, which have the most experience of any crew, and are career fire fighters, according to Jean Nelson-Dean, spokesperson for DNF.

"Approximately 75 firefighters using air tankers, helicopters, engines, dozers and building hand line worked on the fire yesterday," she said in a statement Sunday morning. "By the end of the day, firefighters had lined the fire with either dozer line or roads, which stopped the forward progression of the fire.”

Nelson-Dean told the Source that this wildfire was unique because it eventually moved into an area that had been treated by the DNF with chemicals prior to the wildfire to reduce burning. 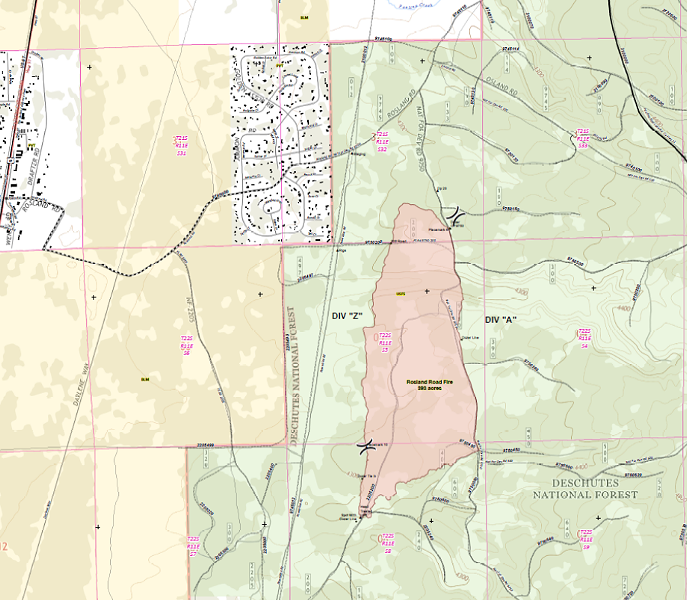 “When at first it was running through the crown [tops] of the trees, it’s like a book of matches,” she said. “In the treated area, it dropped to the ground; it doesn’t move as rapidly and it slows the progression overall.” Low winds helped the crews keep it under control on Saturday into Sunday.

Nelson-Dean reiterated that Central Oregon has now moved into an extreme fire level and the only places campfires are allowed are in developed campfires in fire rings.

Nelson-Dean noted a number of other fire starters people may not be as familiar with, including leaving a car running in a dry area, which could send off sparks onto the ground. And when towing a trailer the chain that connects the trailer to the vehicle may start to drag on the pavement which could send out sparks.

By Monday afternoon, the air quality in La Pine and Bend was “good” according to Oregon Department of Environmental Quality. It had dropped to moderate over the weekend in both places.

Other notable fires in or around Central Oregon this July include one near the Wolf Creek Campground in the Ochoco National Forest (11.8 acres), the Pelton Dam Fire in Jefferson county (20 acres), Finley Fire in La Pine (45 acres), the Alder Creek Fire (50 acres), the Paulina Lake Fire (48 acres) and a 1.5 acre fire in the Horse Butte area near Bend.