I recently visited Fall River, a sleepy fishing town on the Rhode Island border whose long-established Portuguese community has made it the capital of Portuguese seafood in North America. There, amid the wine-sauced littleneck clams, the grilled cod, scallops moçambique and Portuguese paella, I found a bowl of kale potato soup that almost stole the show.

It looked simple on that white tablecloth, and it is. All I could see were shards of green floating in a thick, milky broth, but I soon discovered linguica, a type of cured Portuguese sausage similar to chorizo, lurking beneath the surface. This humble bowl of soup was the opposite of fireworks, but in a good way. It was like a symphony at a very low volume. 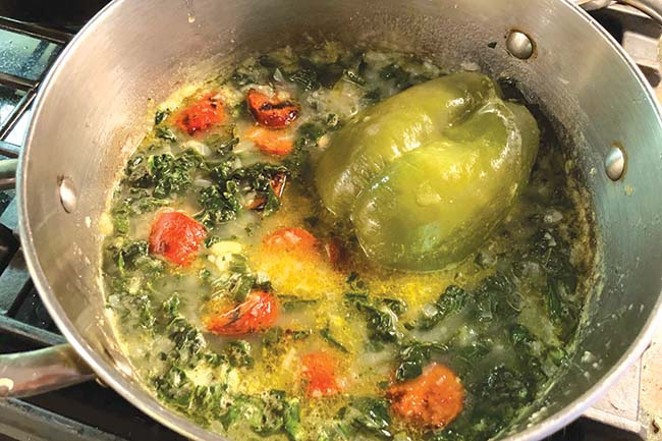 I knew there would be caldo verde at Sagres Restaurant. In fact, my quest for this Western Iberian comfort food was the motivation for making the trip. Because unlike seafood-based dishes like the mariscada or camarao alhinho, I can bring caldo verde with me, in recipe form, and reproduce it back home with local ingredients.

Sagres, according to the internet, is one of two restaurants in Fall River that serve caldo verde (the other being the incomparable Mr. Chicken). I learned a lot at Sagres, not just about caldo verde. I will forever be grateful for the waiter's firm assurance that it's OK to drink red wine with seafood.

Caldo verde translates into soup of greens. While kale is the green most often used, any durable leaf will do, including collards, broccoli leaves or chard, to name a few. Since then I have made batch after batch of caldo verde, trying to recreate that glorious and mellow experience.

I followed the recipes I found online but it always came out too busy or too bland. Although I saw no evidence in that Fall Riverian bowl of caldo verde, I began to suspect bell pepper.

I began to wonder if it was the linguica I was using, purchased from the local Star Market. After all, I knew of a certain fisherman of Portuguese descent named Mario, a friend of a friend. Mario makes the two-hour drive to Fall River from Gloucester, on the Massachusetts north shore, in order to get his linguica. So maybe I needed better linguica?

Perhaps, but before making a linguica run, I tried adding a whole bell pepper to my caldo verde, for some stealth flavor.

I had noticed pieces of bell pepper in most of the other dishes I enjoyed in Fall River. Could it also be a secret ingredient in the caldo verde? It is green, after all. And has a flavor that can't be replaced or replicated.

I began making my caldo verde with a whole bell pepper simmering in the pot, similar to how I often will add whole onions, carrots or celery crowns to a pot of soup. They never make it to the final bowl. So, too, with my bell peppers, which you could smell all through the house. Their fragrance clearly made it into the caldo.

Ultimately, it's more of a linguica broth, which if you aren't careful can be a bit heavy because of it. I like to cook the linguica to drain some of the grease. With lemon zest to add levity, my caldo verde ended up with some fireworks to it, but in a good way. So next time I drive to Fall River, I'll be able to focus on the littlenecks.

A mellow bowl of kale and potato soup that will leave you feeling nourished and satisfied. Serves six

Boil the potatoes for a half hour in a gallon of water. Then allow to cool.

In a soup pot, meanwhile, saute the onions in the oil on medium heat. Add the whole bell pepper to the pan.

When the onions are translucent—about 15 minutes—add the potato water to the soup pot. Add the bay leaves and veggie bouillon. Simmer for 30 minutes.

Slice the linguica into half-inch rounds. Brown them on the grill or pan. Add the linguica rounds to the soup pot along with the zest. Simmer for 15 minutes.

Remove the ribs from the kale and mince the leaves crosswise. Add the kale to the pot. Cook another five minutes. Season with salt and serve.