La Niña offers the rarest and most prized of all Central Oregon commodities: snow. So far, it's been a "bland year."

Occurring every few years, La Niña is defined by stronger trade winds which cause water in the Pacific Ocean near the equator to be a few degrees colder than usual. This shift in temperature affects weather all over the world. While La Niña can wreak havoc on global farming commodities, she's a double-edged sword in the stone. Pulling her out may promise more of the featherweight stock many outdoorsy Oregonians covet: snow—glorious snow. So far though, the year has been kinda meh.

Prior to opening day at Mt. Bachelor, many saw La Niña dividends in the back and side country. Longtime guide services noted more people off piste, exploring by all-terrain or splitboard gear than ever before—no doubt in part related to universal COVID cabin fever and a 2020 winter season cut short. 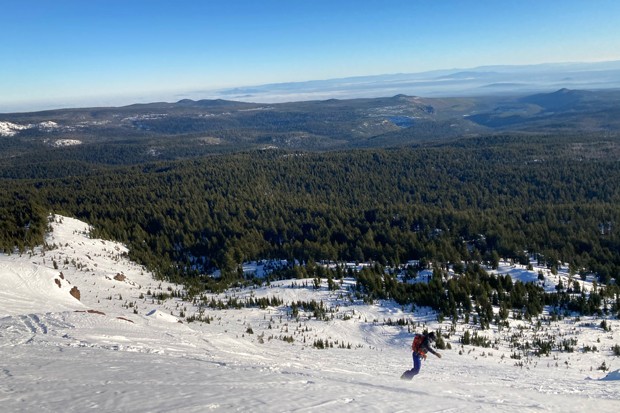 Skinning up on skis between Pine Marten and Outback lifts before the resorts opened, local skier Sarah Pascal found, "Really decent pow. Not too heavy, and a really good base. Didn't really worry about hitting anything on the open trails."

According to Tyler Rummel, lead mountain communications specialist at Mt. Bachelor, the early coverage came from heavy snowfall in the month of November, when an astonishing 89 inches fell. Compare that to November 2019, when the Cascades were snowless until Nov. 19, and 25 inches fell for the entire month, Rummel reported. In December, however, the snow fell short of average.

"December had us quiet down a little with the mountain recording 63 inches of snowfall for the month," Rummel noted.

For the Nordic contingency, cars have been piled up along the Cascades Highway and overflowing designated recreation lots so far this season. Bend local Erik Fernandez reveled in a Friday the 13th, 1.5-foot powder cross country trail break on Tangent Loop.

"[Had to] cut trail most of the way. One of the toughest cross-country days I've ever had. It was a beautiful winter wonderland though, and those are always more special when it's the first of the season."

On Dec. 7, opening day at Mt. Bachelor Resort, with faces hidden behind masks and goggles, winter shareholders stacked in lift lines emitted a special gratitude, perhaps related to La Niña. Although freshies weren't on the docket, patrons enjoyed a 40-inch base of coverage on Pine Marten and Skyline lifts throughout the locals-only opening week. Blue bird spring conditions, albeit a bit icy, and manageable parking, despite the rollout of a new reservation system, kept the restless energy of the bullpen mostly corralled. 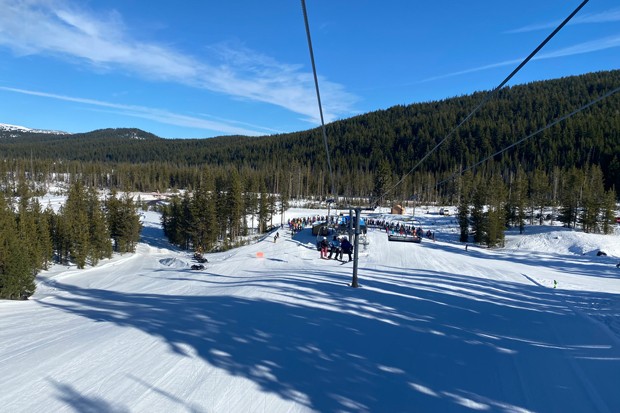 Now a month into the season, scientific data may be raining on the La Niña parade. Kyle Gorman at the Oregon Water Resources Department isn't celebrating a high-snowpack year just yet—though he's hopeful.

"This winter has been about as bland as it can get," Gorman wrote in an email. "However, in the next few days, there will be an atmospheric river hitting the NW part of Oregon and the Western Cascades which should be exciting (for us water geeks)."

Gorman, who forecasts snowpack yearly in order to anticipate reservoir and drought conditions in the region, has some concerns. "At this point in time, the readings for the amount of water in our snowpack is starting to get serious," he wrote. "We are well into winter and what I was hoping for has not materialized yet. We are just under 100% of average snow water equivalent. I was hoping to have 150% or more by now."

Early in the season, Mt. Bachelor's staff is looking for history to be on its side.

"At Mt. Bachelor... our historical snowfall record of 665 inches occurred in the La Niña year of 2010-11. The trend for these types of years has been average snowfall in most winter months with one to two months having near or record-setting monthly snowfall. Additionally, January, February or March have the highest chance of being the excitingly large snowfall month," Rummel said.

Looking forward to the many months remaining of pow crop sharing, much remains to be seen in the way of guaranteed returns. Market volatility of Bend's ace winter commodity abides. Standby.