February 14, 2017
7 comments
In the wake of the presidential election, many have been motivated to be more politically active than they have in the recent past. In Bend, that's translated into a renewed interest into the activities of Oregon politicians including Representative Greg Walden (R), who represents the 2nd District covering the eastern two-thirds of the state. While that's a giant district—the seventh-largest in the nation, in fact—local constituents say they're unhappy with Rep. Walden's lack of presence in the area. 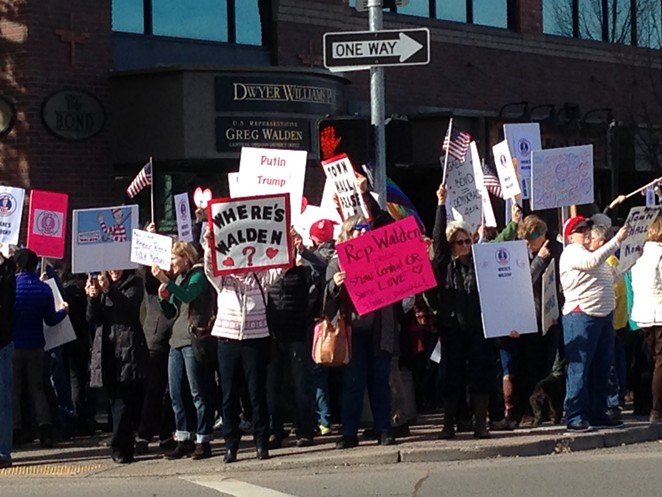 "We deserve the chance to meet publicly, in Bend, with Representative Walden to discuss vital issues for our democracy," said Bonnie Walker of Democracy Happens in a Tuesday release.

Rep. Walden held a telephone town hall for about 4,000 listeners Feb. 6, but many people reported being left out of the call, even after signing up—including Source reporter Brian Jennings.

Source reporters asked Rep. Walden's representatives about future town halls (stay tuned for "How to Rock a Town Hall" in the 2/16 issue). Rep. Walden's communications director Andrew Malcolm said the Congressman held 27 in-person town halls in the 20 counties he represents in 2016, and plans to hold at least one in Deschutes County this year.

Meanwhile, representatives from Oregon Senators Ron Wyden and Jeff Merkley's offices say the Senators hold at least one town hall in each county each year.

“I look forward to continuing the conversation in Deschutes, Crook and Jefferson counties about how to preserve and protect the Oregon way focusing on solutions,”said Sen. Wyden in a Feb. 14 release.