August 28, 2020
13 comments
On Thursday, Aug. 20, a bus driver in Bend put a Black passenger in a chokehold until he lost consciousness. The cause? Because the passenger was not wearing shoes.

Twenty-five-year-old Bend resident Dorian Zane Allstot had gotten kicked off the bus at Hawthorne Station once before because he had no shoes. He came back a second time wearing socks. 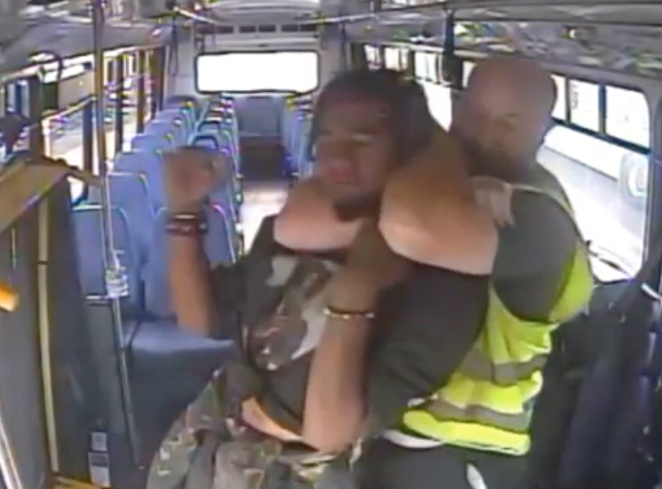 The Source obtained two CET videos from Deschutes County District Attorney John Hummel that document the incident. These are posted at the end of this article.

The bus driver, Michael Lee Brinster, 44, is employed by Para-Transit Services as an operator of Cascades East Transit buses. He told Allstot to get off the bus because shoes are required to ride on the bus. But according to the policies of CET, shoes are not required. After Allstot boarded the CET bus for the second time without shoes, Brinster began yelling at him and physically confronted Allstot at his bus seat.

Allstot refused to leave and began calmly mocking Brinster by asking Brinster to give Allstot his own shoes and saying, “I thought I was wearing shoes, that’s so weird.” At the same time Brinster repeated, “Get the f—- off my bus,” at least 20 times.

Then Brinster grabbed Allstot and slammed him against the window of the bus and accused him of pulling out a knife. While Allstot was wearing a knife on his belt, he said he did not touch it or pull it out.

Then Brinster put Allstot in a chokehold and dragged him off the bus and threw him to the ground, where Allstot lost consciousness.

After Allstot woke up, he came back to the bus door and began mocking Brinster and spat in his face, while attempting to provoke him into a duel on the sidewalk in front of the bus.

At the same time, Brinster called 911 and told the operator that Allstot was brandishing a knife and was going to pull it on him. Allstot admitted that he did threaten Brinster with his knife during this part of the altercation, though the video footage shows Allstot instead smoking a cigarette and laughing at Brinster.

Police soon arrived on the scene at Hawthorne Station and arrested Allstot for unlawful use of a weapon, menacing and harassment and took him to Deschutes County Adult Jail, where he spent the night. Police officers said that Allstot may have been drinking, according to District Attorney Hummel.

Brinster was not arrested.

The next morning, Hummel reviewed arrests in the county from the night before, and decided not to file charges against Allstot and ordered him released from jail until he could complete a further investigation.

After reviewing the video footage from CET, Hummel charged Brinster with Assault in the Fourth Degree and Strangulation. He charged Allstot with Harassment for spitting on Brinster, and Menacing for the knife incident after he was removed from the bus.

“The actions of this bus driver were shocking and criminal,” Hummel said in a statement. “He approached a passenger in an aggressive, disrespectful and violent manner: all because the passenger was wearing socks but no shoes.

“The fact this happened on a transit bus that regularly serves many of our most vulnerable residents is disheartening,” Hummel said.

“The bus driver committed a violent assault against the passenger, but I will not tolerate vigilante justice in Deschutes County,” he said. “I understand the passenger’s anger at the bus driver, but this justified anger is not a legal excuse for later inviting the driver to fight, pulling out a knife, and spitting on him. If you commit serious crimes in this community, I’ll charge you, regardless of whether you’re a white bus driver or a black bus passenger who is houseless.”

During a press conference this afternoon, Hummel was asked by a reporter if he thought that race was involved in this case.

“I don’t know what is in the bus driver’s heart and mind,” Hummel said. "He never expressed animus towards Mr. Allstot because of his race. It does seem like there was a disregard… or maybe he treated him less than he would have treated me perhaps, a man in my suit who maybe didn’t have my shoes because I came from the gym and left them in my locker. Perhaps there would have been a different reaction.”

The Source could not reach Allstot for comment, though he said this on his public Facebook page regarding the incident:

“Yeah, bus driver lied out his ass to the cops about me trying to stab him with a knife I never pulled,” Allstot wrote on Aug. 22. “And the cops weren't interested in watching the actual f——— bus footage whatsoever, so instead decided to make it easy and just slap me with some felonies.”

The Bend Police Department originally charged Allstot with Aggravated Harassment (Class C felony), Unlawful Use and Carry of a Weapon (Class C felony with a potential sentence of up to 5 years in prison and fines reaching $125,000) and Menacing (Class A misdemeanor).


Update: This article was updated on Sept. 3, 2020 to reflect the conviction records for both Allstot and Brinster.