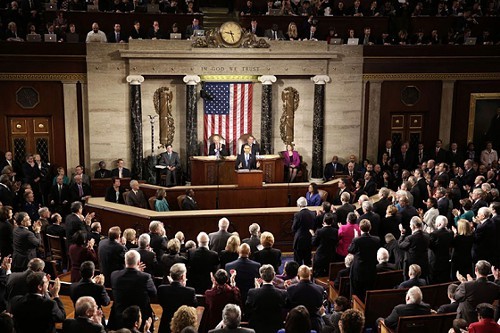 After last night's State of the Union Address, where Obama confronted, among other topics, gun violence, immigration reform, climate change, arms reduction, manufacturing and inflation, we thought it was time to reveal a truth, dear readers. We've been planning a party. And GoodLife Brewing Co. is helping.

What's that? Didn't know the White House was brewing beer? Well they are. And have been since at least 2011 when Obama bought a home brewing kit for the kitchen. In September, after many requests from the home-brewing community, the White House released a couple of its recipes.

Since learning of this delicious news, we've been trying to wrangle a local brewer into making said beer, for us and for you. GoodLife agreed and brewing is underway . We'll be throwing a party at the westside brewery early next month. We hope you can come. Stay tuned for more details.

And Cheers! To Obama, the GoodLife brewers, democracy, social justice and bunny rabbits! We'll see y'all there.