Who Will Pay to Dredge Mirror Pond?

Private and public partnerships explored as a way to bridge $6.4 million gap in funding 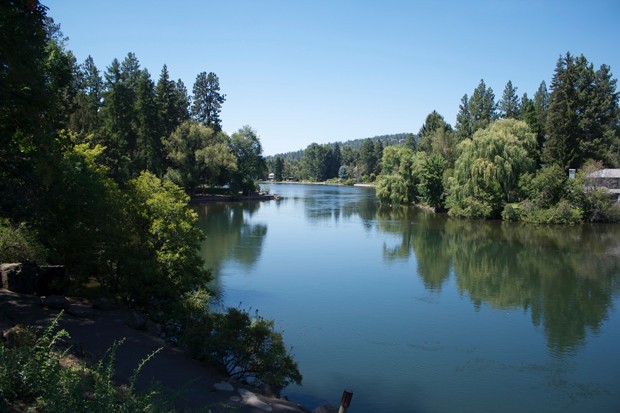 It might look idyllic on its surface, but downtown Bend's iconic body of water remains embroiled in controversy about dredging the sediment underneath, who should pay for it and when and where its stakeholders can meet about it.

After Mirror Pond Solutions—a group formed in 2013 to explore private sector involvement in preserving Mirror Pond—purchased the land underneath the water's surface in 2015, stakeholders created a committee between the City of Bend, Bend Park and Recreation District and members of MPS to discuss how to upgrade the pond, dredge it and how to pay for it.

Earlier this year, members of those stakeholder groups held several private meetings to discuss funding options. Those private meetings raised red flags for some residents, who said those meetings should be open so the public would be properly informed.

On Aug. 10, BPRD released a summary of key facts and information regarding Mirror Pond. In the memo, BPRD stated that the main issue is that Mirror Pond is a sediment collector as a result of the Newport Avenue Dam. The 100-year-old banks along the pond are failing and storm drains built several decades ago need replacement or capping, the summary stated.

According to BPRD, MPS has already spent $434,000 on permitting and other direct costs in preparation for dredging. Chris Telfer, a certified public accountant who also is part of the Celebrate Bend Foundation, a group dedicated to preserving Mirror Pond, told the Source Tuesday that the group has gotten $320,000 in private pledges for dredging, mostly from people who live near the pond.

"Our focus has been to people who live right on the pond, and they've all come forward pretty substantially," Telfer said.

Telfer said that of the $320,000 in pledges, $99,300 has already come in. This leaves stakeholders looking for ways to cover the rest of the $6.7 million price tag for dregding.

During the Sept. 19 City Council meeting, Bend City Manager Eric King asked the Council whether discussions should continue with the BPRD and MPS on removing the sediment in Mirror Pond. The majority answered yes, excluding councilors Barb Campbell and Nathan Boddie. The Council decided to proceed with forming a publicly noticed Council subcommittee—again, Campbell and Boddie dissented. The Council also looked at solutions for how to finance the dredging, including releasing a funding solutions matrix, which consists of 17 possible ways to fund the project.

According to a breakdown of funding options from the City of Bend, the City would be the lead agency on the stormwater outfalls (some of which drain into the Deschutes) estimated to cost $3.5 million plus another $8 million of improvement work to prevent future stormwater runoff, paid for through the City's Stormwater Fund. BPRD is the lead agency on trail connection and riverbank restoration, at an estimated cost of $6.5 million, which would come from the general fund and System Development Charges. According to the City's breakdown, dredging and ongoing maintenance would fall to MPS, and is estimated to cost $6.7 million. Subtracting pledged monies, the funding gap is at $6.4 million.

Councilor Bruce Abernathy said during the Council meeting he supported looking at a franchise fee, in-kind contributions, general fund contribution and a user fee to pay for the City's obligations. The franchise fee Abernathy supported would increase fees to Pacific Power and Light customers. The "user fee" would be paid for by users of the Deschutes River, according to King.

The last time the pond was dredged was 1984. Funding came from a federal grant, the City of Bend, BPRD and citizens.

Bend city councilors—and candidates—share mixed opinions about what to do with the pond this time around.

"No I do not support dredging," Campbell said during a candidate interview at the Source office Sept 21. "As a city councilor, I really don't think it's appropriate for us to pay for that project."

Sarah McCormick, who's running against Campbell in the City Council election, said the pond was the "jewel of downtown" and supports dredging it.

In July, Foster Fell, a Bend activist, filed a suit against the City Council and BPRD board members Brady Fuller and Ted Schoenborn to overturn the City and BPRD's decision to hold closed Mirror Pond Solutions Committee meetings.

According to City legal staff, its Mirror Pond work group isn't subject to public meetings law because the members only plan to gather information, not deliberate or make recommendations, and because it doesn't contain a quorum of either City Council members or park board members.

In 2009, the Bend City Council created the Mirror Pond Steering Committee to address sediment buildup. The committee was comprised of representatives from BPRD, the City of Bend, environmental organizations, business and neighborhood associations and other stakeholders. That committee later formed the Mirror Pond Ad Hoc Advisory Committee to negotiate options with Pacific Power, which owns Newport Dam.

In December 2013, the City Council and the BPRD board unanimously approved a resolution to affirm the recommendation of the Mirror Pond Ad Hoc Advisory Committee to pursue the preservation of the pond. Community meetings and online surveys had resulted in input from more than 4,000 people, indicating an even division between those who preferred the river to flow in a more natural manner versus those who favored the pond, according to the BPRD memo. A third option would have reintroduced habitat to the banks of the river along Drake Park, created a fish passage and preserved the water elevation of Mirror Pond. Seventy-four percent of those polled preferred this option—which was taken off the table because in 2016, Pacific Power decided to about-face and retain ownership of the dam, after company leaders had previously stated a desire to dispose of it.

In March 2015, BPRD's Board and the City Council passed a resolution to keep Mirror Pond near its historical form, enhance habitat, maintain or improve public access, identify funding other that tax dollars or reduce the frequency and quantity of future sediment efforts, according to the BPRD draft.

Mirror Pond Solutions purchased the land under the pond in 2015. Since that time, it signed a non-binding memorandum of understanding with BPRD, calling for both entities to work together to resolve the Mirror Pond Project. It also calls for MPS to donate the land under the pond to BPRD upon completion of dredging and setting in place a solution to fund future care of the pond.