Why Not Sleep Through Winter? | Natural World | Bend | The Source Weekly - Bend, Oregon

Why Not Sleep Through Winter?

The antics of hibernating critters 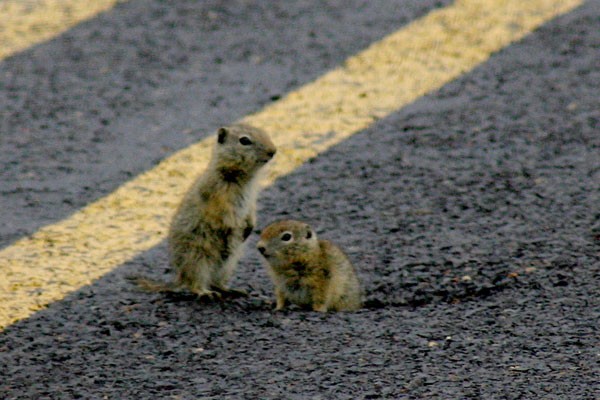 The longer I live, the more I wish scientists would succeed with "induced hibernation," especially for old duffers like me. I hate winter! Well, not really. I do enjoy going out with my family getting in the winter wood, something I've been doing almost all my life, but not a much as I did when I had less gray and more pep.

When I was a kid we had a huge wood burning furnace in the basement of our New England farmhouse. Wood cutting started in October in Connecticut, with oak and elm being the dominant species used for keeping warm in winter. An old "misery whip," a two-man cross-cut saw, was the tool we used to buck up logs into firewood lengths. I can still hear my Uncle Harry on the other end of the cross-cut, saying, "Catsfur! I don't mind you ridin' that thing, but would you quit draggin' your feet!"

("Catsfur" was the nickname he gave, because I was always asking: "What's this or that fur," and he'd answer, "Catsfur.")

Hibernation is a way that many mammals—and at least one bird—spend winter. (In the '60s, Common poorwills—that spend summer in this neck of the woods—were discovered hibernating among the roots of willows along cut banks of streams near Sacramento.) The process puts the animal into a deep sleep where breathing and heart rate slow down to a hairline between life and death.

Hibernation is not to be confused with the torpid state hummingbirds and swifts can drop into for short periods of time to escape a cold snap. Both are dependent on insects for food, so when a cold snap hits, the birds hide in the shelter of deep foliage, turn down their breathing and heart rate and wait it out. If the cold snap goes on for over 72 hours, however, they're in big trouble.

To hibernate, the animal going into that state must have a suitable layer of fat. The fat is metabolized to make food and (and water) for the animal's s-l-o-w-l-y circulating blood.

Almost all the burrowing rodents we see running around Central Oregon in summer sleep through winter. Yellow-bellied marmots, as well as California, Belding's, Merriam's, Columbia and Washington ground squirrels spend up to seven months sleeping. They appear back above ground in March and have gone back to bed by late July.

During those short five months above ground, they reproduce and eat, eat, eat. The Belding's ground squirrel's favorite food is dandelions, along with almost 100 percent other vegetation. If, however, they happen to come across insects, bird's eggs, worms—or one of their dead brethren on the road—they will consume those resources as well.

A bear will eat huge amounts of juicy berries and insect larvae to put on the fat reserves necessary to make it through winter. In some areas of the West, hibernation food for grizzlies is tough to find. If they can't find enough pine seeds and army cutworm moth larvae, it's curtains.

Mammals need water to keep the blood healthy. During hibernation that's taken care of with water metabolized out of the fat. "But..." you may ask, "what about elimination of waste water afterward?" Like most old men, I get up three times in the night and head for the bathroom—something a hibernating bear can't do.

Amazingly, the urea is recycled and turned back into protein, as packrats do. (Packrats—which do not hibernate, rarely drink water. They recycle water so many times the waste is almost pure urea; there's so much in the urine that it coats the rocks near the packrat's den almost pure white, instead of the characteristic yellow.) Which reminds me, don't eat yellow snow!

And don't eat "desert licorice" either! While you're poking around the lava rock habitat of packrats you may come across a tar-like substance that resembles licorice. It ain't! It's the chemical result of packrat urine on packrat scat. The black scat is altered by the chemicals in the urine into a solidified mass of tar-like (or licorice-like if you prefer) chemicals.

From my experience, bats are the deepest hibernators of all. When I was studying and banding bats in the lava caves near Bend in the '70s, I would often remove a bat carefully from its head-down perch on the cave ceiling, and then photograph, weigh and band it. It wouldn't wake up.


(Packrats—which do not hibernate, rarely drink water. They recycle water so many times the waste is almost pure urea; there's so much in the urine that it coats the rocks near the packrat's den almost pure white, instead of the characteristic yellow.) Which reminds me, don't eat yellow snow! tweet this

But you know, I did discover that Townsend's big-eared bats wake up at least three times while hibernating in winter. I would often return to the caves where I had banded them, finding them sleeping in a different location than where I left them last.

Turns out, they are so deep in sleep that oxygen in their blood drops to such a low level that lactic acid builds up, causing the bat to start breathing faster. The bat takes advantage of its physiological alarm clock and flies around to pump itself up with oxygen. After the oxygen content reaches the level necessary to keep the cells alive and healthy, the bat goes back to a new location in the cave and drops back into its hibernation state.

Some of the most interesting hibernators, however, are butterflies and moths. While the Monarchs have migrated to Mexico and California to escape winter, our swallowtails and moths are wintering over as either eggs, or wrapped in the silk of their chrysalides and cocoons. Mourning cloaks and California tortoiseshells, however, winter over as adults. What's neat is that in all stages, insects possess an antifreeze in their "blood" that protects them from freezing, even way below zero!

I have developed a wintering and nesting box guide for this area. The East Cascade Audubon Society and I give them away. You can catch up with me to get one at at Birder's Night, held at 6:30 pm on the third Thursday of the month at the Bend Environmental Center—or just send me an email.