"Thoroughbreds" changes the rules of the race 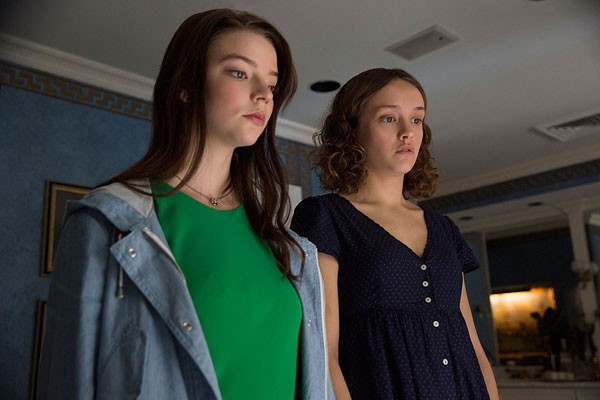 Lily is a teenage girl who lives with her unnamed mother and stepfather, Mark, in his ornate and massive mansion. Lily hates Mark, who rapidly alternates between barely restrained hostility and cold disdain for her. He's a fitness freak with a rowing machine upstairs in his bedroom, which sounds like a churning and anxious stomach, making Lily feel like she's slowly being digested. The sound of the machine is driving her mad.

Amanda is a teenage girl who butchered her injured horse with a knife, resulting in legal and mental health issues she's still dealing with. Her mother hires Lily to tutor Amanda since the girls used to be best friends. Amanda doesn't feel anything, faking her emotions in order to fit in and casually thinking she might be a sociopath. One night, Amanda asks Lily if she has ever given any thought to killing Mark, and they make a rough plan.

On the surface, it's easy to compare "Thoroughbreds" to films like "Heathers" or novels like "Rules of Attraction," but those stories are both quite obvious about what they're trying to say about society. The writer/director of "Thoroughbreds," Cory Finley, isn't interested in telling another story about disaffected youth or dead-eyed, rotten teenagers. Instead, he finds a razor-sharp line between a psychological thriller and a biting satire, high-wire walking around them both.

"Thoroughbreds" as a film is just like Amanda and Lily: at turns anxious and uncomfortable, while also pretending it's like everything else we've ever seen. It's a story populated by unreliable narrators, sociopathic teenagers and the idle rich. The only truths we can ascribe to these characters are what we bring to the theater with us. The irony is that the film is deeply empathetic, not just to Amanda and Lily or poor, doomed Mark, or to the ambitious drug dealer the girls hire to kill him. The film might not want to buy the world a Coke, but it might buy its friends some coke.

Tim (the very much missed Anton Yelchin) sells drugs to minors and was arrested a few years prior for statutory rape. He's too pathetic to be a predator. Instead, he struggles to connect to people his own age and looks at high schoolers as his peers. When Amanda and Lily draw him into their web, we know the girls will destroy him. Tim knows it, too, but spent too many years learning how to posture his toughness that he forgot how to actually protect himself.

Anya Taylor-Joy and Olivia Cooke breathe such remarkable life into Lily and Amanda that we'll follow them anywhere, which might be the point of the whole movie. When confronted with such casual evil, how can we stand a chance? "Thoroughbreds" is so coldly clinical and detached that I found it absolutely astonishing how deeply affected by the film I became. The movie is a mirror to our own humanity (or lack thereof) and refuses to let us close our eyes.