When Redmond's Wild Ride Brewing was an unnamed project in the planning stage—it opened in 2014—one of the five original co-owners remarked that the process itself was "a wild ride" and the concept stuck. Eight years and one global pandemic later, the ride now flows into Prineville. In addition to the original 20-barrel system, the beer makers now operate a five-barrel pilot system and taproom in what looks mighty similar to its original location—down to the glass garage doors, towering grain silo and bank of four food trucks. If it ain't broke.... 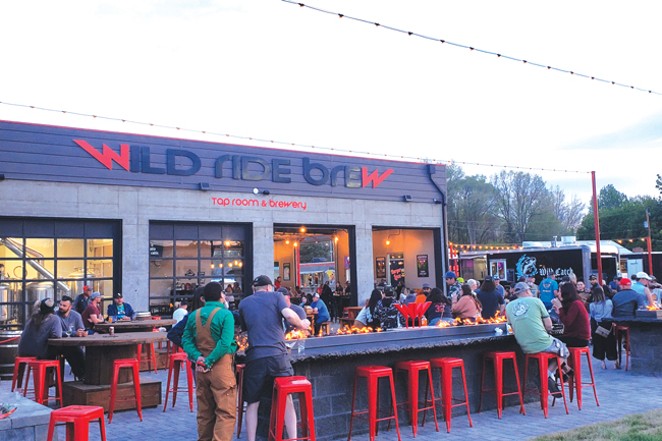 Co-founder Brian Mitchell said it was the pandemic that, "shifted our focus of operations to what we had more control over, which was a second taproom location," given that "distribution has been very challenging since the pandemic hit."

Wild Ride's beers are distributed beyond Oregon in Washington, Idaho and Alaska.

What really pulled the brewing company through—and every local company that's still in business—is the support it received from locals. Said Mitchell, "We have always felt so fortunate for the Redmond and Central Oregon community (and now Prineville as well) for all of the support they've given Wild Ride. It's a huge reason we host a handful of special events throughout the year to raise a lot of money to give back to the community and as a way to say thank you in an entertaining way. It always sounds kind of corny when you say it, but we wouldn't be here without the Central Oregon community supporting us, especially during these past couple of years."

“It always sounds kind of corny when you say it, but we wouldn’t be here without the Central Oregon community supporting us, especially during these past couple of years.”—Brian Mitchell tweet this

The new Prineville location's smaller brewing system allows Wild Ride to both "fine-tune current beer recipes" as well as experiment "with unique brewing ingredients," Mitchell told the Source. There are a total of two dozen house beers on tap (plus a pair of guest ciders, not to mention wine options and soft drinks for customers of all ages) in Prineville. Mitchell said Wild Ride's brewmaster, Michael "Curly" White, will oversee brewing operations at both brewing facilities and will "probably get back to some of his old roots in brewing more often on the smaller system." White previously brewed at McMenamins Old St. Francis School in Bend, on its basement-level, six-barrel brewery for nearly 15 years.

As for what might come next after opening a second location after eight years in business, Mitchell said, "We've always invested in ourselves." He credits the extraordinary team that has made Wild Ride the destination it's become. As for possibly eyeing a third destination, he added, "It's a bit early, but it certainly has been discussed. If and when the time is right to expand again, it's very likely that we'd be looking outside of Central Oregon, (but) it's about finding the community we feel would support the Wild Ride brand...and create a fun, casual, beer-centric environment."