Following a local death due to Hantavirus, a primer on how to handle rodents in or near your home 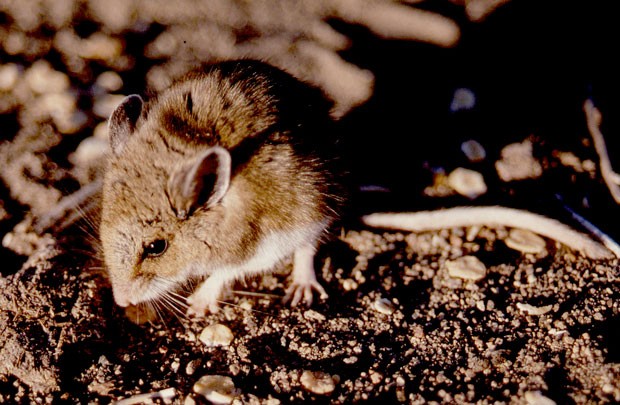 "Never let a mouse live in your house; they will steal the breath of your children." That's a saying I've heard came from the people of the Hopi Nation—and also an accurate description of the symptoms of Hantavirus. The Hopi people apparently recognized the role wild rodents play in the spreading of diseases among the human population.

If you decide to rid your home or property of wild rodents, please do not use chemicals. When an an animal dies from poison, you usually won't find it, and will lie in a dusty corner until someone smells the rotting carcass. In the meantime, other diseases are spread.

A live trap is best, so you can take the animal a couple of miles out into the forest or sagebrush habitat and release it. The good old Victor snap trap rarely fails to capture and kill the rodent. Handle it with throw-away plastic gloves, and if you have a septic tank, flush it down the drain. The body is actually good food for a septic tank. Wash the area where it was trapped with disinfectant or alcohol. If no septic tank, place body and gloves in plastic bag and discard for trash pickup.

The recent, unfortunate, death caused by Hantavirus in our area is a deadly reminder of what rodents in one's shoe can cost. Several year ago there was a similar tragedy involving a child in Warm Springs. The family's pet cat returned home with a Townsend's ground squirrel it killed and left on the front porch. A flea carrying the plague got to the young lady, and the doctor treating her apparently didn't recognize the infection for what it was in time to save the child's life.

Since that time, plague has occurred in rural and semi-rural areas of the western United States, primarily in semi-arid upland forests and grasslands where many types of rodent species can be involved. Several species of animals, such as rock squirrels, wood rats, ground squirrels—including our much-loved golden-mantled ground squirrel—prairie dogs, chipmunks, mice, voles and rabbits can be affected by plague, and both wild and domestic carnivores can become infected by eating infected animals.

Tularemia is a wildlife disease you do not want to come into contact with. It is highly contagious and kills most mammals that become infected with it. tweet this

Scientists believe plague bacteria circulates at low rates within populations of several species of rodents, without causing excessive die-off. The result: infected animals and their fleas serve as long-term reservoirs for the bacteria, called an enzootic cycle. Occasionally, other species become infected, causing an outbreak among animals, called an epizootic cycle.

The plague bacteria is usually transmitted to humans by the bite of an infected flea. However, during plague epizootics, many rodents die, causing hungry fleas to seek other sources of blood. People, dogs and cats may also bring plague-infected fleas into the home. Flea bite exposure may result in primary bubonic plague, or septicemic plague.

Contact with contaminated fluid or tissue can become infected when handling tissue or body fluids of a plague-infected victim. For example, a hunter skinning a rabbit or other infected animal without using proper precautions could become infected with plague bacteria. This form of exposure most commonly results in bubonic plague. In addition to plague, tularemia can also spread this way.

Infectious droplets is another method. When a person has plague pneumonia, they may cough droplets containing the plague bacteria into the air. If another person breathes in these bacteria-containing droplets, they can cause pneumonic plague. Transmission of these droplets is the only way that plague can spread between people.

People who allow their cats to wander around outside are particularly susceptible to plague, as the cats can be infected by eating infected rodents they kill. Sick cats pose a risk of transmitting infectious plague droplets to their owners or to veterinarians. Several cases of human plague have occurred in the United States in recent decades as a result of contact with infected cats.

It's those charming little voles that I do all I can to avoid—especially if they're still alive and moving about. I do not enjoy killing anything, even the disease-carrying rodents so common around the sagebrush and juniper land I live on, but I'm always astounded by the number of voles I find in castings (pellets) left behind under a hawk or owl's nest. I'm particularly grateful they're so proficient at reducing the vole population.

Then there are the poor old jackrabbits. At the moment they're undergoing their cyclic population die-off from the ravages of tularemia. For the last five years we've seen a good-sized population of jackrabbits as we've explored the Great Sandy Desert and adjoining countryside for golden eagles. It wasn't uncommon for us to see at least 15 or so jackrabbits in a 3-mile run across the sagebrush and bitterbrush countryside. Today we're lucky if we see one for an entire day.

Tularemia is a wildlife disease you do not want to come into contact with. It is highly contagious and kills most mammals that become infected with it. I can recall several years back hearing of two rabbit-hunters dying of tularemia when they decided to barbecue a couple of infected rabbits.

And then, in addition to Hantavirus and bubonic plague being carried to us by wild rodents, there's hemorrhagic fever, Lassa fever, Leptositosis, Lymphocytic chorio-meningitis, Omsk hemorrhagic fever, rat-bite fever, Salmonellosis and probably some stuff from overseas we don't have a name for yet.

In closing, I'd suggest contacting the Deschutes County Health Department if you capture and kill a rodent you don't recognize. The information may fit into a mystery they're working on. Call Heather at 541-617-4705.