Will My Ballot Get Thrown Out? Is Voter Fraud a Thing? | The Source Weekly - Bend, Oregon

Will My Ballot Get Thrown Out? Is Voter Fraud a Thing?

The County Clerk of Deschutes County offers voting advice for the 2020 elections, plus a rundown of Oregon's unique voting laws

The 2020 election will look like no election in history—especially for people living outside of Oregon. Throughout the rest of the U.S., heavy turnout could mean long lines at the polls, and coronavirus precautions may make those lines even longer. Conflicts could arise between poll watchers from each party. On top of that, Americans may not know the final results of the elections for weeks.

Here in the Beaver State, most of these issues are an artifact of another era. Oregon was the first state to support mail-in voting in 1998. It's just one of a number of ballot measures passed over the last 20 years that have come to define the progressive character of the state. 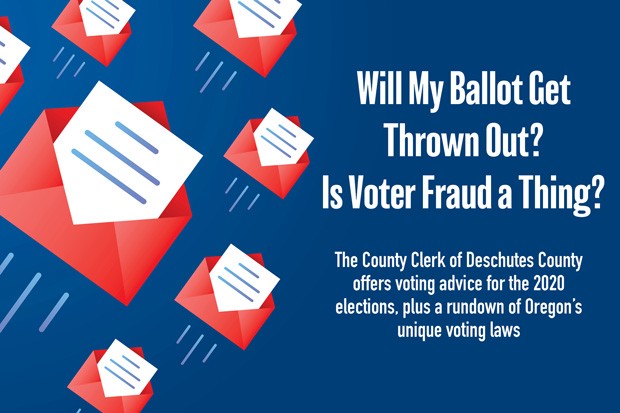 "When you look at the history of Oregon, when one party was for [mail-in voting] the other party was against it, and vice versa," Nancy Blankenship, Deschutes County Clerk, told the Source. In 1995 for example, a Republican-led legislature passed a bill that would have expanded vote-by-mail for primary and general elections, but Democratic Gov. John Kitzhaber vetoed it. In 1996, Oregonians elected U.S. Sen Ron Wyden (D-Oregon) in a special vote-by-mail election.

"Then Democrats say, they love vote by mail. Republicans say, 'Oh, bad, bad, bad.' And Oregonians listened to all this and said, 'This is ridiculous. We like this, it makes sense,'" Wyden told the Vox news site.

Vote by mail was eventually passed by Ballot Measure 60, a citizen's initiative, in 1998. It passed with a two-thirds majority voting in favor—a margin of 64.9% to 30.6%, according the Secretary of State.

"We feel pretty good about being the nation's first vote-by-mail state. Washington was second and then Colorado," Blankenship said. "It is not only easier for you and I, but people with other circumstances and people with disabilities and all kinds of situations that are able to participate."

Paul Gonke, a Reed College political scientist and expert on voting issues, found that Oregon's "motor voter" program had also begun to increase turnout and accessibility by 2017. Passed in 2015, people are automatically registered to vote when they get a driver's license or register a car in Oregon. Gonke's study demonstrated that 37% of new voters that year were under 30, and were more likely to live in low-income, low-education and racially diverse areas.

In order to clear up some misconceptions and answer simple questions about the voting process, the Source interviewed Deschutes County Clerk Nancy Blankenship for a recent episode of the podcast, "Bend Don't Break." Blankenship has been serving in her current role since 2003 and has a long list of certifications and memberships that underscore her enthusiasm for the democratic process. Growing up, her mother volunteered at the polls and she had members of her family who served as county clerks in other parts of Oregon.

Hear the full podcast conversation with Blankenship at bendsource.com, including brief stories around the origins of Oregon's voting laws as well as her insights on the changing party affiliations of Deschutes County.

Here, Blankenship talks about Election Day and how to vote in Deschutes County.

When will I get my ballot?

Deschutes County ballots will be mailed Wednesday, Oct. 14. Blankenship personally escorts the ballots over to the post office in Bend, where they are pre-sorted and ready to be delivered locally. Ballots should arrive by Saturday, Oct. 17 at the latest.

When do I mail it back or drop it off?

No postage is necessary on Oregon ballots, thanks to SB 861, which was passed during the closing hours of the 2019 legislative session. Mail it back by Monday, Oct. 26 to ensure the ballot is counted.

Where do I drop it off?

For those who miss the deadline or would rather deliver their ballots in person, beginning Friday, Oct. 16, 10 official ballot drop boxes throughout Deschutes County will be open for ballots. Drop ballots off before Tuesday, Nov. 3 at 8 pm.

One of the most popular drop-off sites is at the Deschutes County Clerk's Office at 1300 NW Wall Street in Bend. Access the drive-thru drop box by turning east off of NW Wall Street, across from Wall Street Storage. The ballot box is red-orange and will be on the left. Also, for people who long for the days of going to the polls, the county offers the option to vote in person on Nov. 3. Enter the building and go up to the Upper Floor where privacy booths will be provided from 8am–5pm.

Is there a chance my ballot could be "thrown out" for any reason?

Blankenship said in Deschutes County, 1% of ballots are "challenged" in a typical election. This year, she believes it will be closer to 3% because she anticipates a lot of participation for first-time voters and infrequent voters who may not be familiar with the process.


When a ballot is challenged, it means it will not be counted unless the challenged voter takes action within 14 days of the election. Blankenship said one of the most common reasons ballots are not accepted is because a voter failed to sign the outside envelope before they put their ballot in the mail. The second reason: The signature the voter used to sign the envelope does not match the signature on file with the state. Blankenship said in either case, voters will receive a bright yellow card in the mail and must address the issue listed on the postcard as soon as possible.

Blankenship recommended that voters update their signature by getting a signature update card at oregonvotes.gov, or at the library, DMV or the County Clerk's office.

"There's no limit on how many times they can update their voter registration with a new signature," Blankenship said. "So if you've broken your arm, or if you have a medical condition that's come up, or if you are 20 and you are still maturing that signature, or if you're the creative type and you've got multiple types of ways you sign your name... we'll take all of those and have those on file so that we can validate your ballot envelope when it comes back."

“We feel pretty good about being the nation’s first vote-by-mail state. Washington was second and then Colorado. It is not only easier for you and I, but people with other circumstances and people with disabilities and all kinds of situations that are able to participate.-Nancy Blankenship tweet this

How do I check to make sure my ballot was counted?

To make sure your ballot is received and counted, go to oregonvotes.gov. Click on "My Vote," one of the green squares on the top row. On the next page after selecting your preferred language, enter your name and date of birth to find out where your ballot was mailed on Oct. 13. After the election, this will display the status of your ballot.


If your address has changed and your ballot was mailed to the wrong place, it's now too late to change it online. Instead, call the Deschutes County Clerk's Office at 541-388-6547 and they'll issue you a new ballot. They can also let you know after the election if your ballot was counted.

Will the U.S. Postal Service collapse on Election Day?

"They've got their systems in place," Blankenship said. "My contact at the main Portland office has been doing this longer than I have, and I've been here for 17 years. The volume of mail... although it's large... is nothing compared to this thing that the post office has been doing for hundreds of years called Christmas and the holidays... Don't worry, the post office has your best interests at heart," Blankenship said.


In an Aug. 14 press release, Secretary of State Bev Clarno had this to say about the USPS: "Fortunately, Oregon has two decades of experience working with our local contacts at the United States Postal Service and has an excellent partnership with them to ensure ongoing support for our elections. We will of course continue to work with them and monitor any potential impact to both the mailing out of ballots to voters and the return of ballots. We at the state level are meeting with our USPS partners to ensure we are ready for November. The USPS recognizes that Oregon leads the nation with Vote by Mail and that we are using the latest USPS technology to streamline the process."

Is voter fraud a thing?

Blankenship said voter fraud is extremely uncommon. During the 2016 election, the Oregon Secretary of State moved forward 52 to 54 cases of potential fraud to the attorney general, and most were from people that may have voted in two states, she said. Oregon is part of a consortium that helps identify double votes and track people who have moved from different states and counties. The clerk's office also works with Deschutes County Health Services to remove people from the roles when they die.


The Heritage Foundation, a right-wing think tank, put together a handy guide to every state's voter fraud convictions. It reported 15 total cases in Oregon since 2000. To put that in perspective, 2,051,448 votes were cast in Oregon during the 2016 election alone.

How do I learn more about the candidates and the issues?

Every voter should have received a voters' pamphlet for the Oregon General Election by now. If it accidentally ended up in the recycling, find it online at oregonvotes.gov and then click on "Current Election" to download the whole thing, or just the section for Deschutes County.

The Source Weekly built an extensive library of one-on-one endorsement interviews with nearly every candidate running for local and state office. We asked each candidate the same questions, so this is one unfiltered way to find out how different candidates respond and then form your own opinion. Next week, the Source will publish a full list of our endorsements with explanations for each one.