Will Old Man Winter Have Teeth or Dentures? 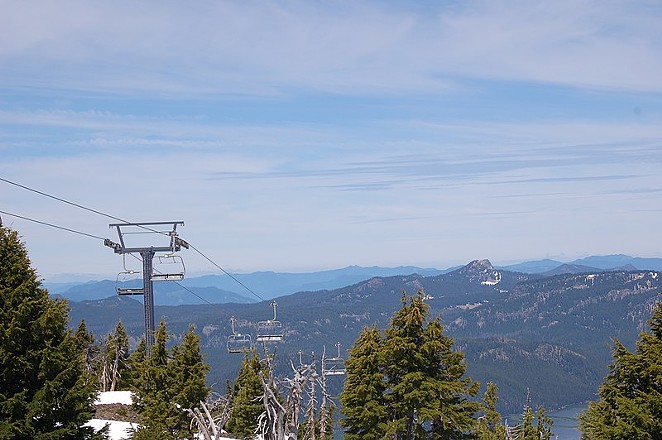 This winter is predicted to be an El Niño year, with temperatures slightly higher than normal in December and a dry January. According to the Oregon State Department of Forestry and the National Oceanic and Atmospheric Administration, the Cascades are on track for a lower than usual snowpack this winter. That could all have an impact the local economy, one way or the other.

NOAA predicts a 50 percent probability of above-average temperatures for the region from December to February. Pete Parsons, meteorologist for the Oregon Department of Forestry said the current analog years—what they use to predict the winter—are 1986 to 1987; 2006 to 2007 and 2012 to 2013. Parsons said the first two winters were El Niño events, while 2012 stayed neutral.

“In any case, the tendency indicated by those years would be for below-average snowpacks again this winter with above-average temperatures at high-elevation sites,” Parsons said. “The temperature forecast is tricky and locally misleading, because low-level inversions can yield cooler-than-normal readings, especially in December and January.”

Those are just predictions, however. In the winter of 2012 to 2013, the Farmers’ Almanac predicted the western half of the country to experience relatively warm and dry conditions, but that’s not what happened. According to onthesnow.com—which tracks snow-sports related data across the U.S. and Europe—Mt. Bachelor had 776 inches dump on its slopes, the second-most amount of snowfall since 2009. The 2017 Mt. Bachelor season, which opened on Nov. 14, had a 24-inch base with 36 inches mid-mountain. As of date of publication, there’s 14 to 16 inches of snow and Mt. Bachelor plans to open Nov. 30, according to their website.

Snow—too little, or even too much—can mean lower occupancy rates at local hotels, and as a result, can lower the amount of transient room tax collected in the winter by the City of Bend—thus having the potential to lower the City’s general fund.

In 2017, which saw only 223 inches fall on Mt. Bachelor, the amount of TRT went up from the prior year—which had nearly 500 inches of snow and saw Bachelor still open on the Fourth of July. One reason for 2016 being lower than 2017 in terms of TRT: too much snow closing the passes, Kevney Dugan of Visit Bend said.

Ganey said years like the 2014-2015 winter, which saw only 177 inches of snowfall on Bachelor, affect what he called the “new buyer” mentality.

“People hold out on purchases to see what the weather’s going to be and that’s when we see the decrease in sales,” Ganey said. With a dry October and most of November, Ganey said his shop’s had an amazing year with its rock-climbing equipment.

“If we didn’t have that, we’d be sitting here with ski gear twiddling our thumbs,” Ganey said.

Ganey said Mountain Supply is a full rental shop selling all things mountain, including climbing equipment, technical clothing and backcountry skiing skins—so in years with late snow, people rent in the near term and get credits toward purchases if they decide to buy.

“We’re a local shop that can react quicker and plan in smaller, near-term window,” Ganey said. “We can change local messaging and promotions when the snow is coming.”