Will Play For Less

In honor of the Money Issue, local musicians talk about the economic challenges of making a living doing what they love

"Everything is free now, that's what they say; everything I've ever done, gotta give it away.

Someone hit the big score, they figured it out; that we're gonna do it anyway, even if it doesn't pay."

-Gillian Welch, "Everything is Free" from "Time (The Revelator)"

Patrick Pearsall is a local bass player who, for the 10th year in a row, performed over 200 shows this past year. Eric Leadbetter, a Bend-based classic-rock singer/songwriter, played 260.

Both are thankful that playing music supports their livelihood, and both assure me that actually making money from the local music scene takes a lot more than talent. 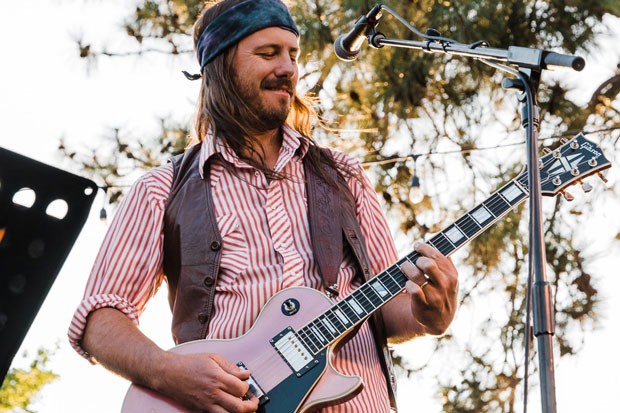 How do performers and songwriters make money these days, when music is so readily available for free? Stream an album on Spotify, catch your favorite local act for no cover, or rock out to Grammy-award winning artists at free downtown festivals. Is it even possible for local musicians to make a living from their craft?

Pearsall moved to Bend from Aberdeen, Washington, (home of Kurt Cobain) in 1991, partly for musical opportunity. While Aberdeen was "depressed," lacked venues and offered little for an aspiring musician, Bend in the '90s at least had a few places to perform. M & J Tavern was one of the primary hotspots back then, hosting a weekly open mic night and local bands, Pearsall said. It remains one of the only venues that has survived 30 years later.

Pearsall believes that the kind of people who are attracted to Bend tend to financially support musicians in a way that is not as common in big cities and smaller towns like Aberdeen. Many newcomers are affluent, active and are often retired, with lots of joie de vivre.

Leadbetter agrees. He moved here from southern Oregon four years ago. He had tour stops in Bend for years with his band Jive Coulis and took note of both the enthusiasm and the size of the crowds. Now that he lives here, he's grateful for the number of Baby Boomers that resonate with his '60s- and '70s-rock inspired style, and says they're usually willing to tip generously and buy albums.

Both Leadbetter and Pearsall teach music on the side to supplement their night job. They both told the Source the typical gig pays $100-$125 per player, per night—a rate that hasn't budged since before they were born. There is much better money to be made playing high-end resorts and weddings, but those are seasonal, Leadbetter said.

There’s not enough people to support all the cooks in the kitchen. Many of those musicians are getting underpaid, accepting deals from venues that they should not accept. There’s no labor solidarity. The days of music unions having power are long gone.—Gabe Johnson tweet this

Gabe Johnson—a local musician and owner of Parallel 44 Presents—moved to Bend in 2006. He's booked 1,150 shows in Bend as either a performer, a booking agent or a promoter hosting national acts.

Johnson says he's felt the squeeze of competition caused by the influx of free shows at the $100/night "menu venues," which split the audience for the ticketed events he hosts through his promotion company. He laments the irony that these local gigs are usually played by his friends.

"There's not enough people to support all the cooks in the kitchen," Johnson said. "Many of those musicians are getting underpaid, accepting deals from venues that they should not accept. There's no labor solidarity. The days of music unions having power are long gone."

Yet, Johnson still believes that the musician's version of the American Dream is out there. He's watched bands go from busking on the streets of Portland to bringing in $5,000 a night, six or seven years later. He says it takes a particular kind of resilience to get through the "peanut butter and jelly" years of losing money on tour and coming home without rent money over and over.

What about all the opportunities online to make millions from adoring fans across the globe?

The accessibility of music online has leveled the playing field for those looking for exposure, but destroyed much hope of making money through the sales of original music. Leadbetter says he's been selling his music online for a decade and has made around $500.

Here is some musical math from Soundcharts, a music streaming data aggregator:

Mp3 sales used to be somewhat lucrative—artists net about $6.50 per album—but because of streaming, music fans aren't buying digital albums as much anymore. Sales of downloads fell by 21.2% in 2019 and even more the year before, according to Forbes. Today, downloads account for only 7.7% of global music industry revenues.

Maybe $100 for playing down at the bar doesn't sound so bad after all?

Despite the challenging economics of paying the bills with music in Bend, there’s a major upside to all the population growth over the last 20 years. New venues like Volcanic Theatre Pub offer local performers the opportunity to book their CD release parties at a “real” club with professional sound and an audience that comes to listen attentively to their original songs. The owner, Derek Sitter—a transplant from the L.A. acting scene—says the musicians are usually psyched with the take-home pay from their CD release parties which combine album sales and a generous cut of the door.

“Every day I’m impressed by the local talent of this town, people who have chosen to live here because they don’t want to live in L.A.,” Sitter said. “But you gotta go out on tour, eventually you’re going to have to make a move. Bend may be a stepping stone, it’s a growing market, but you don’t move here to make a living as an artist.”