Will Wildfire Smoke Have Long-Term Effects?

The recent rash of wildfires across the western United States has destroyed small towns, burned thousands of acres of forests, displaced hundreds of people and created a super plume of smoke that currently stretches across the U.S. and parts of the Atlantic Ocean. Though the wildfires have had a devasting effect, one government agency is trying to find the silver lining within that cloud of smoke.

Utilizing input from citizen scientists from around the country, the Environmental Protection Agency developed a free app called Smoke Sense to gain a better understanding of how wildfire smoke affects humans. This study not only collates data from participants on effects from wildfire smoke inhalation, but also provides Air Quality Index levels and information about how smoke affects people with health issues such as asthma, heart disease or chronic obstructive pulmonary disease. The study aims to quantify how people react to wildfire smoke and how they respond to communication strategies from government agencies during a smoke event—especially those communities without a current public health plan. 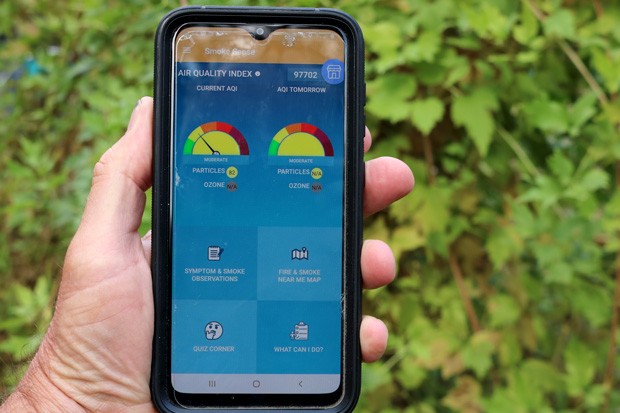 As a research article published in the November 2019 issue of GeoHealth, states, "Data from the pilot season (1 August 2017 to 7 January 2018; 5,598 downloads) suggest that there is a clear demand for personally relevant data during wildfire episodes motivated by recognition of environmental hazard and the personal concern for health. However, while participants shared clear perceptions of the environmental hazard and health risks in general, they did not consistently recognize their own personal health risk. The engagement in health protective behavior was driven in response to symptoms rather than as preventive courses of action."

The user-friendly app opens to a dashboard that indicates current and forecasted air quality indexes for a given area. Particulate and ozone level numbers provide a quick reference about conditions and air quality. The reporting screen for symptoms and smoke observations is based upon a weekly period.

On the Fire and Smoke Near Me Map, users can zoom in on locations and get up-to-date wildfire information including the causes of fires, if known, as well as current size, weather, firefighting activity and any notices of evacuation. It's amazing to visually see the impact of smoke from Western fires as it moves across the region.

In July, an update to the app included a section called "What Can I Do?" which provides tips and information to help people protect themselves from smoke issues and exposure. Many of the tips are common sense: stay indoors during times of unhealthy air or reduce activity levels. Anyone, not just participants, may sign up for emailed air quality alerts through the EPA's EnviroFlash site that targets a person's zip code. These alerts include air quality index information as well as other smoke-related news. If someone is traveling, they can change their reporting location.

In addition to the Smoke Sense app, another helpful wildfire resource is the Central Oregon Fire Information webpage. In both English and Spanish, the site has information and links to current fires, smoke maps, air quality indexes, emergency alerts and evacuation notices. Texting "COFIRE" to 888-777 subscribes users to wildlife and prescribed fire texts and alerts. The website represents a collaboration between numerous federal, state, and non-governmental entities to provide wildfire-related information. Living in a fire-adapted environment impacts everyone, and access to information is critical for residents to see current situations. For those on Twitter, users can also scroll through tweets on the Central OR Fire Info page.

Though many wildfires continue to burn in the West, relief from some changing weather has been assisting firefighters working on these blazes. People are able to not only stay informed and aware of these current fires—but also help to promote an understanding of how wildfire smoke affects us all and how best to protect our health through the touch of a few screens.

The Smoke Sense app is free to download from Google Play Store and the Apple App Store.