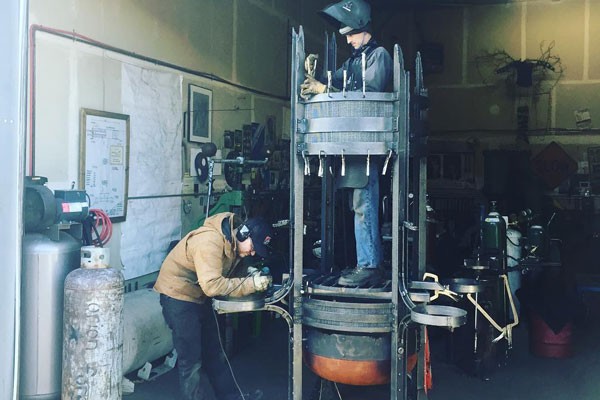 Oregon WinterFest has held a firepit competition at the February event for a number of years. New this year was the addition of a donation program that saw the winning artist gaining a $5,000 cash prize, and a local entity gaining a valuable piece of public art.

This year, the winning creation, by Hunter Dahlberg of Orion Forge, has a new home in the Redmond Transportation Hub. The portions that burned with fire at WinterFest will be replaced with electrical light—but the piece will still stand to be a beacon, welcoming commuters as they come and go.

This year's entry was Dahlberg's fifth into the annual event, and his second win. Building fire pits wasn't high on his list of priorities before entering the competition some years ago, but he says they've since become one of his favorite things to build. Working with materials he often has on hand to lessen the cost of the build for him, he starts with a sketch and allows the design to emerge.

Adorned with a dragon's head guarding tables (for people to place a beer), this year's winning piece, titled "Ancient Beacon," is a call to the Middle Ages and the fantasy world of J.R.R. Tolkien that inspired Dahlberg growing up. The cauldron at the bottom of the piece holds the fire; the long torch attached to the top is the beacon. It can be dipped in the fire, and placed up high to be seen from a far distance.

"I liked the idea of the upper light in the Old Mill—because of the terrain there—you could wander around and see it from far away," explains Dahlberg. With over 50 different types of material and 200 hours of work, the piece was truly a labor of love.

Dahlberg has been blacksmithing for around 20 years, he estimates. It wasn't until he opened his studio that he became serious about his work. Now with two employees, he often can be found creating custom pieces, including metal railings, iron gates, sculptures and even fire pits. One firepit has found a home at Timberline Lodge, a feat he considers a "feather in his cap."

Dahlberg also teaches blacksmithing at the Summit Arts Center in Government Camp and is the current president of the Central Oregon Metal Arts Guild.

He sees the current interest in "craft" as an opportunity to teach people what actually goes into creating a piece. "One of the things we strive to educate customers is how time consuming it is and how tool intensive a seemingly simple form can be. Steel can be immoveable," Dahlberg says.