Driving through Central Oregon in winter, past agricultural fields or open sagebrush flats dotted with juniper, one is bound to notice hawks or eagles perched on powerline poles, fence posts, irrigation wheel lines—or perhaps soaring overhead. Birds of prey concentrate in the region due to an abundance of prey, including waterfowl, songbirds, rodents, carrion and small mammals. The entire state is prime real estate for wintering raptors, as documented by a citizen-science project developed by Jeff Fleischer.

From 1970 through 1984, Fleischer worked for the U.S. Fish and Wildlife Service as an assistant refuge manager in Klamath Falls, conducting numerous wildlife surveys. After leaving U.S.F.S. and moving to the Willamette Valley, he continued looking at wintering raptors. 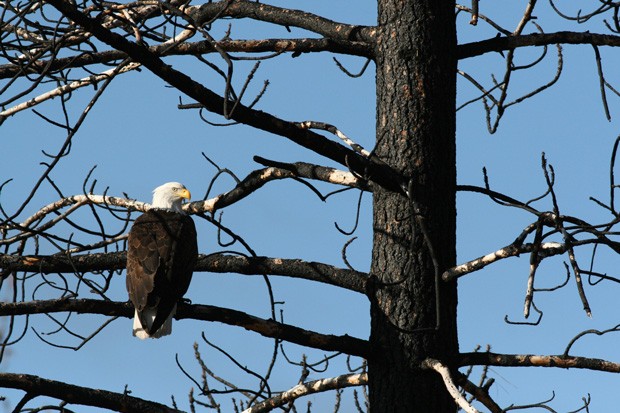 "After moving on from the Service, I spent many years enjoying the hobby of birding, keeping records of what I saw," said Fleischer. He noticed hundreds of birds of prey during his winter excursions around Linn County and decided to take a more structured approach. "I decided to develop four survey routes around the county, and the first season of survey work started in the winter of 2001-2002." Posting those results on Oregon Birders Online, Fleischer began receiving responses and interest from other birders.

After the second winter, Fleischer began developing routes for birders in the surrounding counties, but interest quickly spread to the east side of the Cascades. "While preparing for that third winter of survey work, Chuck Gates, president of the East Cascades Bird Conservancy, later to be known as the East Cascades Audubon Society, contacted me expressing interest in my project and asked me to set up similar routes in eastern Oregon," said Fleischer. He began adding routes, and with support from ECBC, kicked off the official Winter Raptor Survey with 79 routes statewide in November 2004.

Now, after 16 years, there are 430 routes spread throughout the Pacific Northwest.

"Other than eBird (an online birding app), the Winter Raptor Survey project is one of the largest Citizen Science projects in the Pacific Northwest," said Tom Lawler, ECAS president. "Each month, from November through March, hundreds of volunteers survey thousands of square miles of Oregon, Washington, Utah, Idaho, and Northern California in search of raptors." The project also receives volunteer GIS support from a Bend community member, in coordination with ECAS and the National Audubon Society.

To date, 31 species of birds of prey, including hawks, eagles, falcons and owls, have been documented. The "Big Five," as Fleischer likes to call them, are the most abundant overall species and include the red-tailed hawk, rough-legged hawk, bald eagle, northern harrier and American kestrel.

"When I was 6 or 7 years old, I'd lay on my back and watch hawks soar and wish I could fly," said Cindy Zalunardo, Winter Raptor Survey volunteer. "Raptors are majestic, their migration is awesome, and my chest just expands when I look at them in wide open country."

Though viewing raptors is best in open country such as Christmas Valley, Culver, Powell Butte, Terrebonne, and elsewhere, birds of prey may turn up anywhere.

There are several options to learn about these cool birds. The High Desert Museum's Birds of Prey Center has several non-releasable raptors on exhibit. Individuals may explore Fleischer's PowerPoint presentation, found on the ECAS website, which focuses on the project and species ID. Or, join Lawler for a Saturday bird walk starting at the Sunriver Nature Center.

"Roughies" migrate from their tundra breeding grounds and bask in the wintry conditions across Oregon. Come spring, when the raptors return to their breeding areas, it's one of Nature's signals that winter is over—and that Jeff Fleischer gets a well-deserved day off.