With a Fraction of Its Usual Crowds, Amphitheater to Host Cultural Events | The Source Weekly - Bend, Oregon

With a Fraction of Its Usual Crowds, Amphitheater to Host Cultural Events

Local directors find a stage for their show, "Songs for a New World"

As far as local theatre, live music and the arts in general goes, adaptation has become the name of the game. Last week, we detailed the struggles local theater community members were facing when it came to finding outdoor performance space. This week, persistent and creative community members shared how the cultural community is successfully adapting, and major players in local outdoor venues are beginning to actively support the arts.

Whereas the Bend Park and Recreation District remains firm on its decision to ban public park performances until further notice, Les Schwab Amphitheater is opening its metaphorical doors to local talent. 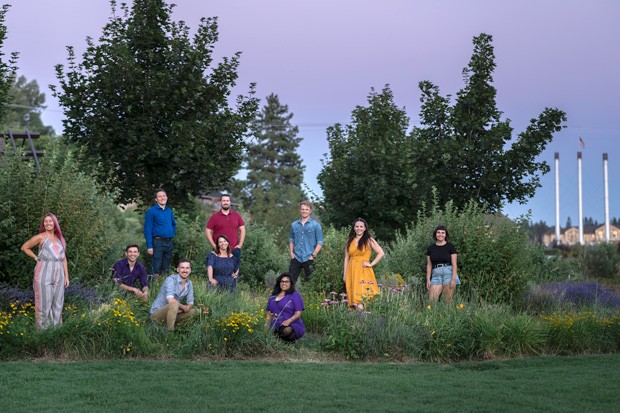 Local directors Angelina Anello-Dennee and Craig Brauner experienced previous success in scouting an out-of-the-box venue for their show, "Songs for a New World." The first show will take place drive-in style in the New Hope Church parking lot in Bend. But as Anello-Dennee and Brauner reported, the message of this specific show lends itself to a bigger audience.

The two directors are friends with a member of the local theatre community, John Kish, who recently opened a plant shop [Somewhere That's Green] in the Old Mill District—giving him a unique "in," they said, since the Old Mill and the Les Schwab Amphitheater are managed by the same team. Kish set up a meeting between Anello-Dennee, Brauner and Brent Joseph, the operations manager at the Amphitheater. The directors said the Amphitheater team was excited about the opportunity to showcase local talent.

"They were very interested, mostly because our show really respects state guidelines," Anello-Dennee said. "They're excited to support community events that can stay within those guidelines. It's really nice to be able to work with them this way, because I know it's not normally something that they do."

“I think it’s awesome that Les Schwab is even considering supporting local talent. I know people want to see Josh Groban and Brandi Carlile. But there is a local need for performance space.”—Craig Brauner tweet this

Brauner added, "I think it's awesome that Les Schwab is even considering supporting local talent. I know people want to see Josh Groban and Brandi Carlile, but there is a local need for performance space. I feel our strength as directors is that we've really allowed ourselves to move beyond traditional 'theater space.' We're starting to embrace the fact that anything could be a viable space; it could be the Amphitheater, it could be this drive-in stage that we put up. We're realizing that we don't just need the Tower Theatre or CTC [Cascades Theatrical Company] if we want to put on a show. It's encouraging us to think outside the box a bit."

For those familiar with the usual size of Amphitheater crowds, they might find a different experience this time around. "When we were requesting licensing, we found that Les Schwab could house up to 8,000 people," Anello-Dennee explained. "In order to maintain guidelines, we'll only be selling 200 tickets in total. We got the OK to sell 250, but we wanted to leave a little wiggle room for our volunteers and our tech people. We'll only allow up to 10 people in a group; everyone will be wearing masks and social distancing."

As Brauner puts it, you can't stop a creator. "Creation is only stopped when the creator stops creating. I like being presented with obstacles and challenges. We're following the 'stage directions' of the world right now, and we're piecing this thing together."

While they've said some adjustments have been difficult to navigate, both Anello-Dennee and Brauner noted that community support had been consistent and crucial.

"I'm really grateful to the community for being so supportive," said Anello-Dennee. "I'm not a production company by any means. They offered us 'COVID pricing;' not charging us full-price for the venue has really been a gift. I'm so grateful for the outpouring of generosity from the community."