With a Spike in Cases, Capacity Concerns for Oregon's ICUs

The spike in Oregon's COVID-19 numbers that began in early November is causing Oregon's Intensive Care Units to also see an increase in patients. According to the most recent data from the Oregon Health Authority, Region 1, which includes the majority of the Portland metro area, had 337 staffed ICU beds available, with 278 occupied as of Nov. 24. Region 7, which includes Bend, Central Oregon and much of eastern Oregon, had 47 beds available as of Nov. 20, with 41 occupied. Data from St. Charles Health System, which services Bend, Redmond, Prineville and the surrounding areas, showed that 21 of St. Charles Health System's 30 ICU beds were full (or 70% occupied) as of Nov. 23.

On Nov. 20, the Oregon Health Authority reported it was changing the way it tracks cases in COVID-19 testing. Now, instead of reporting the number of new people tested, it is tracking the number of tests administered. 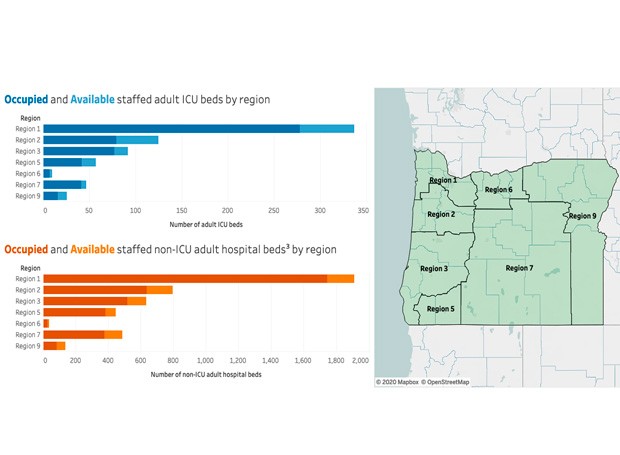 "Early in the pandemic, we measured the number of new people tested," OHA explained in an email. "People who tested negative were counted only once, no matter how many negative tests were administered to them. That provided an accurate count of people with COVID-19, but it has had the effect of undercounting the number of COVID-19 tests that were actually performed.

"Since then, testing has expanded and the state's capacity has increased significantly, and that is leading to a recalculation of testing that will be based on the number of tests administered."

That change moved Oregon's most recent percent positivity calculation from 12.9% to 6.7%.

"While the percentage is lower now, it's still above the level that would indicate declining spread and a safe level to fully reopen schools and businesses," said OHA Director Patrick Allen.