The Painted Diary of Takuichi Fujii

Art is an entryway to understanding the complexities, and sometimes the atrocities, of history. The High Desert Museum's current exhibition, "Witness to Wartime: The Painted Diary of Takuichi Fujii," allows a close examination of internment camps in the U.S. through the eyes of an artist who experienced them. 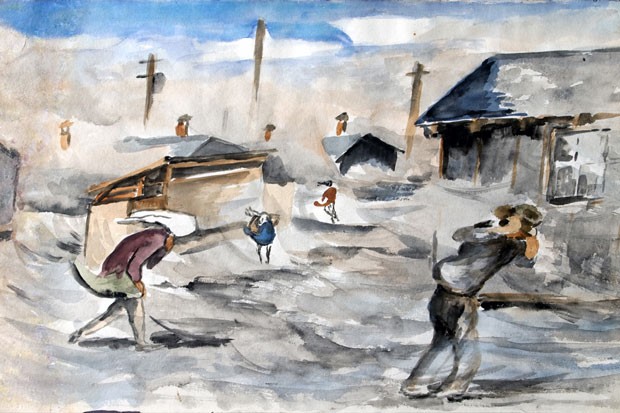 Born in Hiroshima, Japan, Takuichi Fujii sailed to Seattle in 1906 when he was 15. Fujii had studied watercolor in Japan but took up Western-style oil painting once in Seattle. His first exhibition was in 1930; his work shown through the U.S. He exhibited as part of a group show at the Seattle Art Museum in 1941, just before the bombing of Pearl Harbor. Within a couple years, Fujii and his family would be interred in U.S. camps until the end of World War II.

The exhibit features paintings as well as framed drawings from his journals during his time at the Puyallup Assembly Center in Washington and the Minidoka Relocation Center in Idaho. The small sketches make tangible the feelings of confinement: the lack of freedom, privacy and security given to these interred Americans. When viewing the small, 3-inch by 4-inch drawings, neatly lined in a notebook, two per page— simple, quick sketches of space, or rather the lack of it—I was reminded of Elie Wiesel's descriptions of trains in his book, "Night." Fujii's sketches show people gathered on train platforms, behind barbed wired fences. The subjects are faceless, just quick forms on the paper, but each stroke is deeply felt.

Some of Fujii's larger works are also on display. He continued to paint on the theme of his internment even years after he was released. His work is often soft and serene, considering the subject. Sometimes, his color palette is so muted the only color is a small patch of blue sky painted into the corners. I felt small when looking at his beautiful, serene work and feel grateful that this man's act of resistance was to create.

Fuijii died in 1964, and often, delicate work produced this way doesn't last unless it's truly cared for. Fujii's work was preserved and kept whole by his family; his grandson even translated his diary into a book, "The Hope of Another Spring." This preservation in itself is not just an act of love but an act of resistance—not allowing this version of history to be erased, but rather be given a voice, one notebook page at a time.