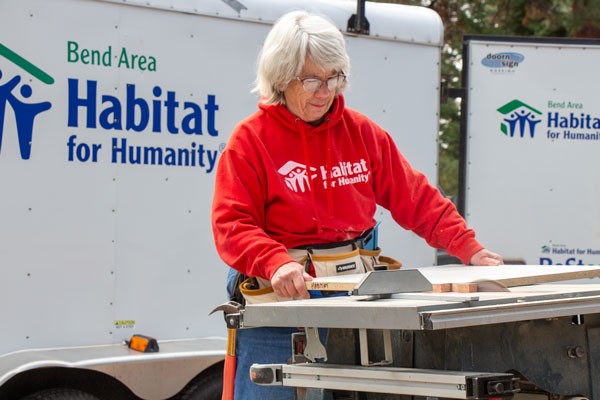 In the week leading up to Mother's Day, Habitat for Humanity is holding its 11th annual National Women Build Week, May 7 through May 12.

For one week in May, women across the U.S. will volunteer their time to help build new homes for low-income families. While spotlighting the difficulties women face in achieving home ownership, the event primarily aims to help families build strength, stability and independence through affordable housing.

According to the Bend Area Habitat for Humanity website, 75 percent of their homeownership applicants are single women. The organization seeks to not only empower these women through homeownership, but the more than 98,000 women across the U.S. who have volunteered their time at Women Build events since 1991.

"It's a very tangible volunteer opportunity, I think that's another draw to a lot of people when they come and build with Habitat," said Brenda Jackson, Bend Area Habitat for Humanity volunteer coordinator. "They can drive by 10 years later, with their baby that they haven't even had—that's 10 years old now—and say, 'Before you were born, I helped build this house.'"

Habitat for Humanity is an international nonprofit that builds low-cost homes and offers mortgages set to 30 to 33 percent of the income of families who qualify for their program. The Bend Area Habitat for Humanity builds and sells around nine homes a year to low-income families and individuals, according to Robin Cooper Engle, Bend Habitat's director of development. She said a few of the stipulations for applicants include having a debt to income ratio below 13 percent and a credit score of 620 or higher.

Volunteers work under the supervision of professionals, so no previous construction experience is necessary. Over 50 women have signed up to build two new homes in Bend so far, Cooper Engle said, and it's a good opportunity for women to try something new.

"The women get really excited and really enjoy a variety of things that we're going to have for them to do," said Cooper Engle. "Each year it is just a little bit different depending on where we are in our construction process."


"They can drive by 10 years later, with their baby that they haven't even had—that's 10 years old now—and say, 'Before you were born, I helped build this house." —Brenda Jackson tweet this

Two homes are currently under construction on a split lot on the corner of Northwest Hartford and Northwest 17th Street. One of the homes will be completed next week with the help of volunteers, Cooper Engle said, who will be putting on the finishing touches, such as landscaping, painting and cleaning it up in preparation for the new owners to move in. The second home is scheduled to be completed in June. Volunteers will be helping to build a carport and a small storage unit. Jackson has worked for Bend Area Habitat for Humanity as the volunteer coordinator for eight years. She said the organization hopes to expand their Women Build events in the coming years to include fundraising for the homes they build.

"A lot of Habitats have teams of women and they will fundraise for the whole house," Jackson said. "In addition to that, their teams do the majority of the work on the house, so it's a true Women's Build house. It's built by the women and funded by the women."

Bend Area Habitat for Humanity hosts four info sessions a year for families and individuals interested in learning more about the homeownership program. The next session is Thursday, May 3 at 4:30pm at the Downtown Bend Public Library.

For women interested in volunteering for National Women Build Week, Bend Area Habitat for Humanity is still looking for volunteers to help landscape on Tuesday, May 8 and Thursday, May 10. Those interested can register online at bendhabitat.org.