BendFilm is filled with brilliant women. Throughout the tenure of the organization there have been several amazing women with the festival, but recently Executive Director Todd Looby has made it a priority to focus on showing movies by women and BIPOC and staffing BendFilm with new and diverse women. This being Women's History Month, I thought it would be a good time to shed some light on some of BendFilm's newest voices, in their own words.

They include Selin Sevinc, head of festival programming: Sevinc is a U.S.-based screenwriter from Turkey, trained as a filmmaker in the U.K. 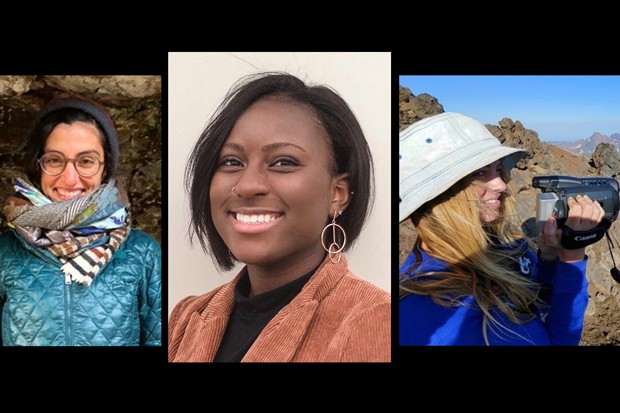 Source Weekly: What do you think your unique perspective brings to BendFilm?

Selin Sevinc: I'm a greedy person when it comes to all things to do with cinema. I studied film and TV and did a master's in production with a focus on directing. I worked in film and TV production in various roles, but my favorite and longest-lasting engagement with film and filmmaking is pure admiration, verging on obsession. I watch films obsessively, so much so that after a long day of screening films for work the best relaxation method I can think of is watching a film, to my husband's bewilderment. I consume films across decades of cinema, coming from different countries and traditions of filmmaking and in any genre and style they come in.

Doone Williams: As I am 25 years old and fresh out of film school, I feel like I can really bring to the table what I have learned and experienced being a film student in the age of Netflix, "streaming" culture and de-evolution from where it all began.

SS: I also write screenplays in various genres, subject matters and styles. Having lived in several countries, met and collaborated with filmmakers, screenwriters and film critics from different backgrounds, my personal as well as professional experiences are wide ranging. I don't know if any of this makes my perspective unique necessarily, but I do think my experience so far puts me in a good spot to think about programming in a way that upholds and encourages diversity, originality and unique artistic expression—values that are central to BendFilm Festival's mission.

SW: What do you think bringing in more women's voices to BendFilm will help to bring forth from the festival and the nonprofit?

SS: Having a privileged and unchallenged access to professional life breeds stagnation. Women haven't had this problem yet. Like all historically ignored voices, women are exceptionally imaginative, hard-working and ruthless thinkers and creators. This is a good window in history to take advantage of what fresh perspectives women are able—and desperate—to provide.

DW: WE NEED MORE WOMEN IN FILM. ALWAYS. This is an extremely male-dominated industry—yes folks, it still is. One of the incredible things about filmmaking is its power to reach mass audiences. Film is a VOICE. If we can get more women in film, we can get more women's voices and ideas heard. As a young woman in this industry, I am excited to be a part of making that happen here at BendFilm.

Ambriehl Turrentine: There isn't one answer for this considering that the women of BendFilm all represent different backgrounds, perspectives and tastes. Therefore, how we navigate this world as women also drastically varies. However, I do hope we're all able to learn from one another—and learn from those outside the organization—to develop programs and opportunities that speak to and uplift those of all marginalized genders.

SW: How do you hope to see the company and the festival grow and change while you're here?

AT: I hope BendFilm continues to embrace bold stories and storytellers, including those who are under-represented, and serve as a platform for discovery of the world's best independent films. I'd also like to see us explore new ways in which we can reach communities, near and far, and work alongside them to build collective power. How can we best support voices that are not our own? How can we reimagine and challenge authority in the film world? How can we access and embrace new modes of storytelling? How can we translate all of that into true and substantial change?

Related A Conversation with Christine Vachon: The producer behind "Boys Don't Cry" and "Hedwig and the Angry Inch" will earn the Indie Woman of the Year award at this year's BendFilm

A Conversation with Christine Vachon
The producer behind "Boys Don't Cry" and "Hedwig and the Angry Inch" will earn the Indie Woman of the Year award at this year's BendFilm
Legendary director Christine Vachon shares her personal insight on filmmaking and the creative process.
By Teafly Peterson
Film

In a Housing Crisis, Put the Focus Back on Locals

All Hail the Queens
Top Stories