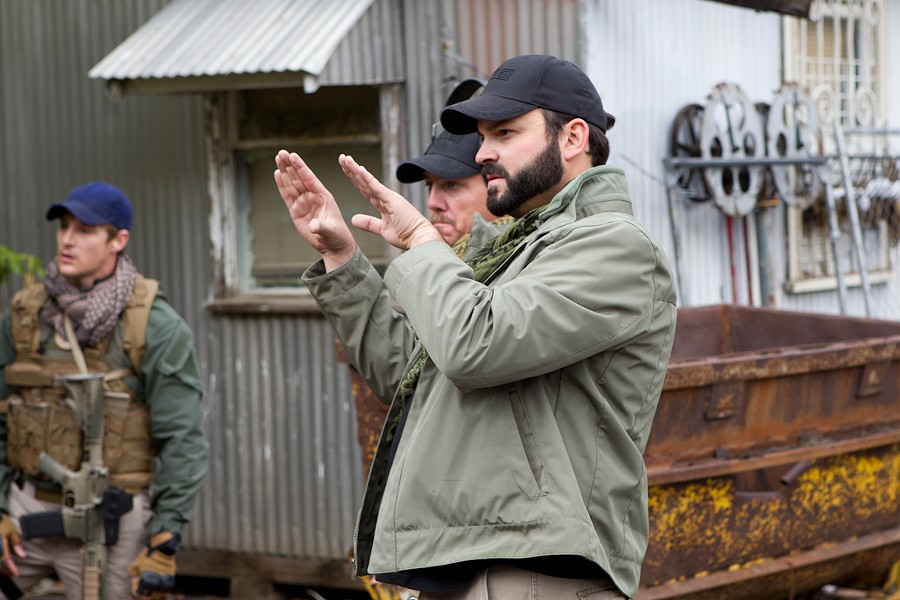 I met Nicolas Mezzanatto through a mutual friend. He had just moved to Bend and was looking for someone to write movies with. We struck up an instant partnership that's been one of the best working relationships of my life. While we were writing together, he would periodically update me on another project he was working on, an action movie about human trafficking called "Acts of Violence."

Mezzanatto didn't just option "Acts of Violence"—the film was actually produced and filmed over the last few months, and now the release date is almost upon us. "Acts of Violence" will be released on Jan., 12, starring Bruce Willis, Cole "Pitch Black" Hauser," Shawn "X-Men" Ashmore and Mike "Friday After Next" Epps.

"In the Army, I always wrote," says Mezzanatto. "I wrote a screenplay about my time in Iraq while I was there. It was a short film about post-traumatic stress, called 'Verdict' which was shown at the GI Film Festival. I met some producers there who really wanted to see a feature film, so I wrote and directed a sci-fi/action film called 'Blackjacks,' which was distributed by Lionsgate. They changed the name of the film to 'SEAL Patrol.'"

That ended up leading directly into his current film.

"Brett Donowho, one of the producers of 'Blackjacks,' was looking for action films to direct and I sent him 'Acts of Violence,'" Mezzanatto tells me. "He loved it, the company he was working for loved it, but wanted a page one rewrite. I flew to Cleveland, Brett and I locked ourselves in his apartment and rewrote the entire script in seven days."


"Acts of Violence" wasn't written as just a typical action movie, because Mezzanatto wanted to raise awareness about a serious problem in our society—happening even right here at home. "There's human trafficking going on here in Central Oregon," says Mezzanatto. "There's an organization called 'The Guardian Group' that's going after them and they're a dynamite group of individuals. What they're doing is extremely difficult and they're doing it really well. In Portland human trafficking is huge, in Seattle it's huge and in Cleveland, where the movie was shot, it's huge. It's everywhere and, as Americans, I think we can agree that it's one of the most vile things that can happen."

It takes some effort getting used to seeing such an amazing cast saying his words. Mezzanatto expands: "One minute I'm in my underwear smashing dialogue into the keyboard, the next minute Bruce Willis is saying it on the big screen. It's insane."

As someone who's struggled for years to get a film made, I had to ask what kind of advice he would give to would-be filmmakers trying to make a living in the most overcrowded market on the planet. His advice is honestly refreshing.

"There's a bunch of filmmakers out there who have a lot of ideas and a lot of outlines," says Mezzanatto. "That's all great, but it doesn't matter if you have the best ideas in the world, if you don't finish it, get it out there and submit it and let people tell you how horrible it is then you'll never get better. "If you have a phone you can go out and shoot a movie, which is better than waiting for the big budget that's never going to show up because no one's looking for talent. That's the old days. No one's going to come and discover you and realize you're a genius, because there's enough genius out there."