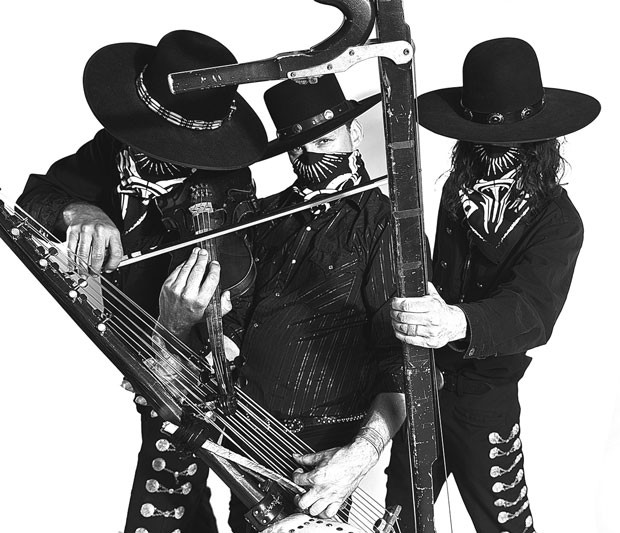 As Bend continues to grow, the city attracts bigger-name performers, as well as more unique talents that may not have come in the past. Fortunately for people in Central Oregon, this area is on Dirtwire's radar. Fans have the pleasure of welcoming them back to the Volcanic Theatre Pub this week, bringing a blend of world sounds with electronic, funky grooves.

Dirtwire includes the talents of David Satori from Beats Antique, Evan Fraser from Bolo and Mark Reveley from Jed and Lucia. Satori and Beats Antique have developed a large following among fans of psychedelic world music. On this Dirtwire side project, Satori takes instruments from around the world and blends them with electronic beats to create something truly unique. Call them cowboys or rebels of the modern music era, combining exotic string sounds with electronic elements and the occasional sound of horse hooves clopping, depending on the song.

Adorned in black Western wear, you may be confused by the appearance of this band, thinking you're seeing a more traditional bluegrass or folk band in the vein of The Dead South. Do not be fooled by appearances; Dirtwire takes the best of Americana and blends it seamlessly with world percussion, soundscapes and electronic beats. The band's attire may speak to traditional American influences, but listening to the music, you can hear distinct influences from Africa, South America and Asia, bringing the audience to completely new worlds in music. Consider it post-millennial psychedelia performed with a whimsical yet hard and dark sensibility.

Dirtwire plays many songs purely instrumentally, but its members don't restrict themselves—leaving room for lyrics and singing when appropriate. The band's most recent album, "Blaze," stirs up a whirlwind of emotion with lyrical songs such as "No More," which features the band Moontricks, opening for Dirtwire on this tour.

Earlier this year, Dirtwire accepted an invitation to perform at "The Spirit of Astana," a national world music festival held in Kazakhstan. Located in the futuristic city of Astana, the festival included acts from more than 20 countries, including Iran, Mali, Turkey, Ireland and Lithuania. Dirtwire was the only band from the United States. The talent buyer for the festival stumbled across them online and liked that they mixed sounds and styles with multiple instruments from around the world.

Dirtwire booked a studio for the entire length of its stay in Kazakhstan, in order to record with many of the other artists also performing at the festival. The band plans to release an album of the collaborations as they explore cross-musical fusion throughout Central Asia.

Some say Dirtwire is at the forefront of the rebirth of Americana—dressing the part of a renegade country western band, but integrating global percussion with electronic soundscapes to conjure the sounds of the future. Feeling burned out on traditional Americana? Don't miss the amazing amalgamation of traditional and global instruments Dirtwire uses to create music that will get you excited about the future of music, and the future of Americana.