Add communal farming to the brewery's list of cool side projects

Visitors to Worthy Brewing can't help but notice the hopyard is looking a bit barren. It's not that the land proved infertile. Quite the contrary; it's being repurposed into a new organic farm, the latest venture for the Worthy Garden Club, the brewery's nonprofit highlighting sustainable practices.

The new farm "came on suddenly," says Lisa Sanco, Worthy Garden Club's sustainability educator, "as many of (founder Roger Worthington)'s ideas do." Worthington is also the guy who deemed the brewery ought to have its own astronomical observatory, the Hopservatory. 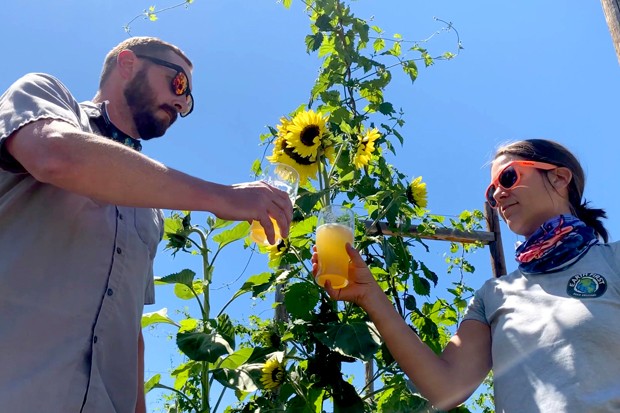 Whereas another of the organization's initiatives, Operation Appleseed, is well on its way to planting a million trees all across Oregon in order to restore forests and combat climate change, the new farm will be a hands-on demonstration of farming practices anyone can employ close to home. The high desert may not be as fecund as the Willamette Valley (where most of Oregon's hops and other crops grow), but the now-kaput hopyard showed how much we can grow around here.

My favorite aspect of the greenhouse and raised beds that were growing hops wasn't knowing that a few small batches of beer were made with hyperlocal hops, but the educational aspect of having visitors—predominantly beer drinkers by default—get to see, touch, and smell the ingredient that makes beer beer.

Anyone who's interested in growing their own for homebrewing purposes or just likes the way they look and provide some "green shade" can purchase the remaining hop plants from the brewery.

A few hop bines—the fragrant flowers don't technically grow on vines—will remain for utilitarian and aesthetic purposes, but three new high tunnels (think unheated greenhouse) will be installed, along with a stupefying amount of soil. The objective is to increase biomass through square foot and vertical farming as well as extended growing seasons that, unlike the monocropping that predominates most farmlands, provides ample and sustainable gardening. Expect classes open to the public that will demonstrate how anyone with some space available—including turning fences into micro-farms—can grow fruits, vegetables, herbs or flowers. In the case of Worthy Brewing, they want tomatoes and peppers they can use for their pizzas and salads. Among the hops, expect highly utilized varietals like Cascade and Chinook.

WATCH: The Worth Garden Club crew talks about their transition from a hop garden to an urban farm:


Incidentally, while Worthy Garden Club has long partnered with Oregon State University, including on a hop breeding program, a recent discovery of a wild or feral hop was found on Worthy's Tenmile property near Yachats. (That said, Worthy's Tenmile Lager isn't made with that hop, but instead with Strata, a newer darling of the hop world.)

Also working on Worthy's new venture is Gwen Bartonek, an urban agriculturalist who's worked with breweries and nurseries in and beyond Oregon. Her growing experience stems as an edible landscaper with Portland Community Gardens and the Oregon Food Bank's Seed to Supper Program helping low-income families grow their own food. Her role began while Sanco is out on maternity leave.

"Lisa has really fostered an environment of learning science and beauty within our community," she said. Like everyone involved in this project, she's dedicated to finding ways to do more while using less. "How much can you grow close to home with the space that you have? Reducing our carbon footprint is important in everything Worthy does. I feel like Worthy's entire mantra is, 'What if?' We bring people in with the beer and try and get them excited about these ideas."