Taps and Tacos livens up Brooks Street even more 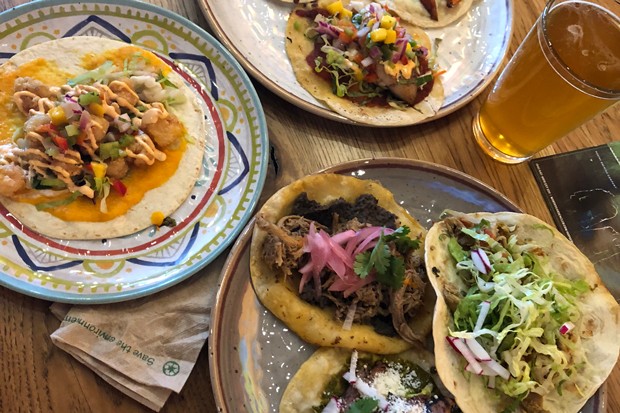 It says something about the density of Bend's beer scene that not only are there several neighborhoods perfectly suited for craft pub crawls—but in some cases, there's no need to so much as turn onto a different street at all.

Take Brooks Street downtown, which saw last weekend the grand opening of Worthy Taps & Tacos. In the former location of Mazza Bistro, the space is the second location for Worthy Brewing, which has been HQ'd in its massive east side facility since 2012.

"Being downtown has always been in the plans for us," says Trevor Coursey, manager of Worthy Taps & Tacos. "The building we're in has been owned by [Worthy founder] Roger Worthington for a while, and we knew having a presence here would be a big help to people like Ale Trail visitors, who say that our original location is too far to visit. It'll help spread the word about the east side brewery, too, and everything going on there."

Unlike Worthy HQ, which features a high-ceilinged restaurant, a massive outdoor space, and an astronomical observatory, Taps & Tacos could almost be termed a hole-in-the-wall, size-wise. Eight Worthy beers are on tap, including the brand-new and eminently smooth Sport Pils. They do a few margaritas and cocktails, too, which go quite well with the seven or so taco styles available, complete with homemade sauces. They're all good, but the Sea of Cortez might be the best one—fried rock shrimp in a flour tortilla with green cabbage, pepper crema and habanero sauce.

It's the latest addition to Brooks, which forms an unofficial border between the core of downtown and Drake Park. "We're really glad to be on Brooks," Coursey added, "since all the downtown businesses are really conscious of each other and work together to make it a better place. We're also open late [until 11 p.m. all week], so we're hoping this can be a great place for industry people to go after work and get a good meal and some beer."

Indeed, old school Bendites who remember when Brooks mainly meant empty storefronts and casual drug activity may hardly recognize it nowadays. Much of this cleanup is the work of David Marchi and the gang at Crow's Feet Commons, the bike/ski/beer/music/coffee complex that opened in 2012 and is still one of the prettiest places in Bend to kick back and enjoy the sunset over some Pfriem bottles. The Beach Hut Deli right across the street is good for casual sandwiches; Pine Tavern a block over is better for diners seeking something a bit more substantial, and Bend Brewing Company speaks for itself.

All great pub crawls end in dives, too, and Brooks Street has visitors covered there with the Wall Street Bar, home to all the pool tables, Oregon Lottery machines and cheap Boneyards. What more could anyone ask for?