Oregon Sen. Ron Wyden visited Bend's Planned Parenthood clinic on July 2, Oregon's easternmost abortion clinic and on the front lines of the now state-by-state approach to abortion laws. The Bend clinic is expecting an influx of out-of-state patients, including those from neighboring Idaho, after the Supreme Court overturned Roe v. Wade and Casey v. Planned Parenthood, the two cases that federally protected women's right to have an abortion. 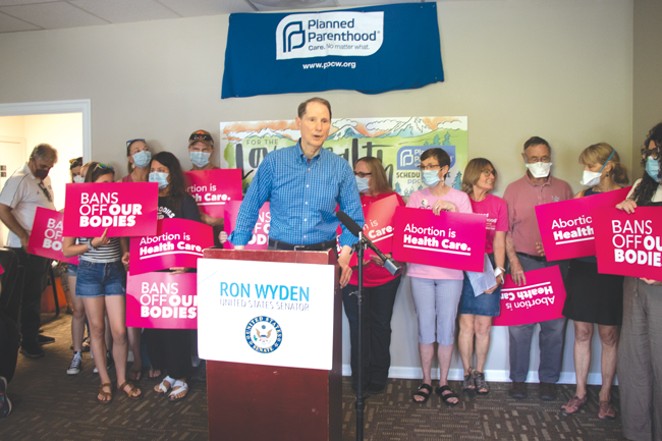 Access to abortion is protected in Oregon's constitution, but the state is likely to be impacted by the decision. The lack of clinics in eastern Oregon is expected to decrease access to abortion in the region by 35%, and Bend's clinic could be seeing over two times as many patients as it's used to, according to studies by the Guttmacher Institute, a reproductive health research and policy organization. Wyden said the overturning of Roe is a clear and present danger to women and warned of efforts to criminalize abortion nationwide.

"The former Vice President Mike Pence said that he would not rest until there was a national ban on abortion, which would mean that Oregon's law would be set aside. We're here to say today, we're not going to rest either, until abortion is safe and legal and available to women everywhere," Wyden said.

Wyden's highest short-term priorities are in increasing access to mifepristone and misoprostol—drugs that induce an abortion, along with protecting personal data that could be used against people who get an abortion. President Joe Biden ordered health officials to make mifepristone more accessible through the mail, but the Food and Drug Administration doesn't allow it to be sent without a doctor's examination, despite it being safer than Tylenol. The FDA also requires pharmacy FDA certification for any pharmacy that seeks to carry the pills, which account for more than half of abortions performed in the U.S.

U.S. Attorney General Merrick Garland said that states don't have the right to criminalize the pills, even while Louisiana has already made mailing abortion pills punishable by up to five years in prison and a $50,000 fine.

The striking down of Roe led many to fear that online personal data could be used to prosecute women who seek an out-of-state or DIY abortion. Personal data has been used over the past two decades on women who didn't adhere to a state's limitations on abortions.

"We're talking about information about Plan B and Plan C, we're talking about location tracking, which can be hugely consequential to the well being of women," Wyden said. "My legislation, the bill, 'My Body, My Data,' is also essential to make sure that your personal private data that you share with apps, for example like period trackers, can't be taken away from you."

The apps are meant to anonymize users, but Wyden said there are loopholes he hopes to close. He also said he's going to leverage his position as Chairman of the U.S. Senate Committee on Finance and his membership in the Budget Committee to secure more funding for Planned Parenthood programs. The Hyde Amendment barrs the use of federal funds on abortions unless the parent's life is in danger, or if the pregnancy is a result of incest or rape — though 17 states do allow federal Medicaid dollars to be used for abortion.

Planned Parenthood receives about 40% of its funding through the federal government, including Medicaid reimbursements, but use of those funds is for non-abortion services like distributing birth control, cancer screenings and STD testing — which Planned Parenthood says is the overwhelming majority of services it provides. Though Bend's clinic is expecting an uptick in patients, it's unclear by how much, and what services will be impacted.

"I don't know that we can fully prepare because we don't know exactly what it's going to look like, but we are prepared, we're ready to help everybody that's in our community that needs those services and also assist people that are traveling far away," said Joanna Dennis-Cook, the Bend Health Center manager. "We've continued to expand our telehealth services including medication abortion, where the medications can be mailed to you. This is critical to help you and folks that are in rural places of Oregon, where it can be an extreme hardship to travel."

When asked about the theoretical feasibility and its possibility of getting past the current House and Senate, Wyden urged people to organize at a grassroots level to make change and to vote in the next election.

“I don't know that we can fully prepare because we don't know exactly what it's going to look like, but we are prepared, we're ready to help everybody that's in our community that needs those services and also assist people that are traveling far away.”—Joanna Dennis-Cook tweet this

The Idaho legislature passed a bill in 2020 that criminalizes doctors performing abortion, punishable by up to two years in prison. Breaking the law would result in a six-month suspension of the practitioner's medical license on the first offense and a permanent suspension on the second.

The only exceptions are if a pregnancy would save the life of the parent, or if it's the result of rape or incest that's reported to the police — who would need to provide a police report to the physician. The exceptions have been criticized by pro-choice groups who say not all rapes are prosecuted and police don't hand over police reports during ongoing investigations.

Idaho's Supreme Court will consider pausing the law in early August so it can hear two cases challenging the law. The law states the ban on nearly all abortions would go into effect 30 days after a Supreme Court decision. The June 24 decision that overturned Roe isn't the official judgement, which is usually issued about a month after opinions are issued, so the ban wouldn't go into effect until August.

Idaho also enacted a Texas-like abortion law that gives people the ability to file civil lawsuits against medical performers who perform an abortion after fetal cardiac activity can be detected, which is usually around six weeks.