December 29, 2021
comment
Giddy up, readers! It's time for a look back at our top 10 most impactful stories of the year. 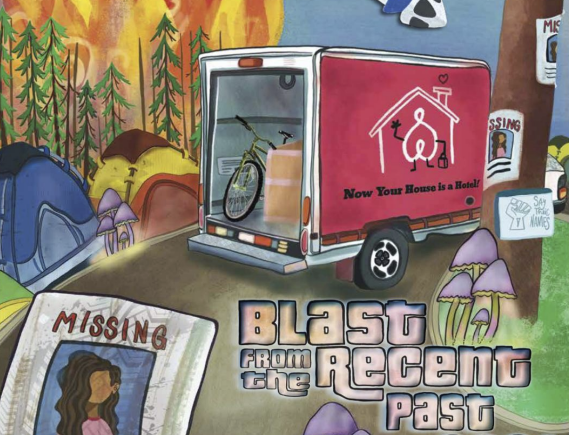 When Oregon decriminalized drugs, they also legalized medicinal psilocybin, the active ingredient in "magic mushrooms." A growing number of studies suggest that the hallucinogen can be helpful in treating major depressive disorder, post-traumatic stress disorder and end-of-life psychological distress.

The Source spoke to patients who've undergone psilocybin therapy, therapists who oversee it and regulators who will determine the treatment's future at the end of a two-year development period. From spiritual trips in Peru to clinical treatment to hospice patients, a wide variety of therapies are approved under the measure. With psilocybin still illegal federally, and the Food and Drug Administration remaining skeptical about some of the details, there's still a lot that can happen with this treatment in the coming years.

As the nation was dealing with a pandemic, the number of missing and murdered indigenous women reached epidemic levels. Women in some tribal communities face murder rates more than 10 times the national average, largely committed from individuals outside of the indigenous community.

The U.S. Department of Justice launched a national Missing and Murdered Indigenous Persons Initiative to overcome barriers including lack of resources, gaps in data, challenges surrounding jurisdictions and a lack of coordination between different levels of law enforcement. Its first annual report found 11 missing indigenous people in Oregon—four of whom are from Warm Springs. The U.S. Attorney's Office anticipates that number is an undercount.


The once-in-a-decade redistricting process changed the donut-shaped border that mapped Central Oregon since the 1990s. New congressional maps lop Bend in with parts of the Willamette Valley into a relatively competitive but still Democrat-favoring district. Bend's outskirts, along with La Pine, remain relatively safe Republican seats.

The state's districting map sheds its southern half, including Deschutes River Woods and Sunriver. Redmond is split in half, with part joining District 53 in Bend and the other joining District 55 which goes as far south as Klamath County.

"There's no way to have drawn it perfectly to meet everyone's expectations," said Judy Stiegler, a former state legislator and political science professor at Oregon State University-Cascades. "I think it was probably as bipartisan as it ever was going to be under the circumstances."

A Tale of Two Rentals


The Source explored Bend's housing woes through two different perspectives. One, a longtime Central Oregonian struggling to find a place to live and a neighborhood that banded together to avoid an Airbnb moving into their neighborhood.

Bendites' difficulties finding adequate and affordable housing intertwines with home construction, underutilized housing stock and tourism. We don't know how the region will adapt to alleviate these growing pains, but until it does, neighborhoods and individuals will have to navigate the tumultuous path toward housing stability.


Two people died at the Hunnel Road campsite in one day during Oregon's unprecedented extreme heatwave in June. The heatwave led to more than 500 deaths in Oregon, Washington, Idaho and Canada.

Joseph King, a paralyzed veteran, was one of the deaths on Hunnel, who volunteers knew for his good sense of humor. Alonzo "Lonnie" Boardman also passed away. Service providers said he was like an uncle to other campers, and always kept his trailer clean. 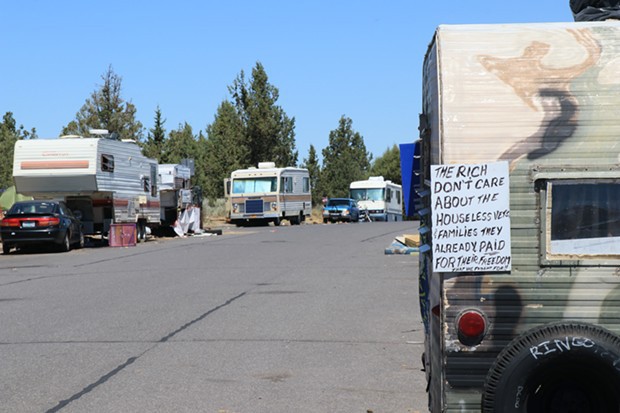 The deaths vitalized a community effort, leading to cooling stations and a supply drive for the road's residents, though the people living there and the service providers attending to them often have to deal with hostile people disrupting their efforts.

Now Hiring, All Positions, All Shifts

At the start of the pandemic essential workers were hailed as heroes for keeping the country afloat, but as the workforce was hesitant to return to work, businesses became frustrated at their inability to open their doors. Though many blamed enhanced unemployment insurance and an ungrateful workforce, experts say the market forces driving the shortage are more complex.

The difficulty of getting to full employment after mass layoffs, an unprecedented amount of quitting, Baby Boomers reaching retirement age, growth in the economy and the competition among businesses to offer the best wages and benefits all factored into the shortage. Wages rose, but often at the cost of increased responsibilities.


Frustrated with the Democrat supremacy that reigns in Oregon government, the rural eastern and southern parts of the state have been overwhelmingly voting in favor of "exploring the idea" of joining Idaho.

"It's not a secession, but it's a vote to start looking into the possibility of a county becoming a county of Idaho," said Mike McCarter, a leader in the movement.

The movement has had a lot of success in the counties that voted on it, but being approved by the state and federal governments present a challenge as it for now mostly courts like-minded voters. A succession of counties would be almost unheard of; modern border changes are a result of natural changes like a river moving. The last time borders were moved for political and cultural reasons was during the American Civil War.


Bend's homeless population is steadily increasing every year, along with housing costs. The City is pushing for more services to address the issue, but often clashing with residents wary of the details of proposed solutions.

A "managed camp" is one that, unlike makeshift ones, would be accompanied by services and campers adhering to a set of guidelines. One proposed on Ninth Street garnered a lot of criticism due to its location near a school, neighborhood and trails.

"We believe that taking the risk of putting the first-ever homeless camp that's been tried in between the two schools is too great a risk for everyone involved in our community," said Lisa Karnopp Nye, a teacher and cross-country coach at Bend High.

The debate over the camp's location and operations rage on as the City continues to find an appropriate site for a managed camp, navigation center and affordable housing.

The Trump takeover of the Republican Party worked its way down to the county level, and the Source found Deschutes GOP officials were "all in" on the former president's claims of election fraud. Former Deschutes County Commissioners and Deschutes County GOP officials visited the Arizona audit, and some were subsequently involved in a grassroots effort to "audit" Oregon's elections.

"We have an election integrity subcommittee that is going to be looking at the processes in our county and then trying to share this with other state officials and work through some of these questions that have been raised, just watching this," former Deschutes County Commissioner Phil Henderson told the Gateway Pundit, a far-right news and conspiracy website.

A chatroom dedicated to the audit was frequented by Deschutes GOP officials and encouraged by some of the nation's foremost election deniers. Ultimately the Oregon audit amounted to targeted harassment at a handful of county clerks where fraud was alleged, but a strategy promoted in the chat seeks to make sure the "patriot" wing of the party prevails over the "Republican in Name Only" (RINO) wing.


Barry Washington, Jr. lived in Bend just a little over a month before he was shot and killed outside of The Capitol, a nightclub in downtown Bend. Washington, 22, was shot by 27-year-old Ian Cranston after getting into an argument and scuffle after approaching Cranston's girlfriend, according to District Attorney John Hummel.

The violence was shocking in a town that is generally considered safe, and ignited a conversation on the racism present in the idyllic mountain town, and disparities in the criminal justice system when Cranston was able to walk on bail just hours after being detained.